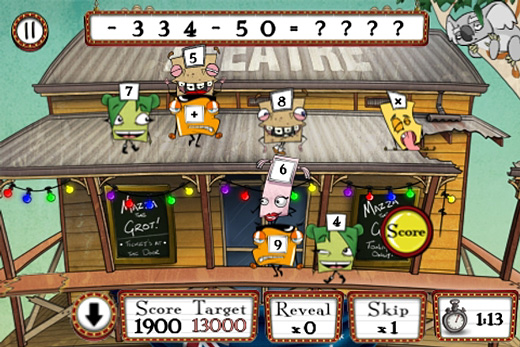 LOW Gameplay that feels like the player is in a drowning tank with no way of escape.

Magic words cannot save this failed trick of a game.

After a disastrous magic performance where the audience mocks his amateur showmanship and inability to pull a rabbit from his hat, the disgraced magician Marvo whips out a mystical tome and recites an incantation that transforms the hissing mob into a frightened mass of letter-creatures. Presumably to thwart the vengeful plot of the maniacal Marvo, the player must choose between a number of mini-games involving rudimentary tasks and the correction or creation of original words. While AbraWordAbra has the potential to be a magic experience that rivals other great spelling games like Words with Friends or Quarrel, the end result feels like a dime-store illusion, not the Houdini of mobile spelling games.

The first game mode, Mizz Spell, asks the player to guide oddball characters representing letters down the side of a rustic Australian Outback Theatre, complete with a lounging Koala in the corner of the screen. The letters automatically walk across the screen while the player's only initial responsibility is to slash away at floorboards with a swipe of her finger to allow the letters to fall to the next level. Eventually, the goal is to get the letters to land in a depository so that the player can use them to correct the spelling of a central word located at the top of the screen.

The challenge here is that while letters will continue to spawn and start to move, only four can fall into the queue at the bottom of the screen. To prioritize some letters, the player can manipulate them by dragging some in front of others, stacking them on top of one another to either speed up or slow them down, or activate power-ups that can increase the speed of letters or offer score bonuses.

Besides correcting the spelling of words, level goals also include score quotas. Here, the strategy for manipulating the letters becomes important, since simply manipulating the necessary letters to correct the key word will still result in a failure if enough points are not earned. At the end of the level, once the word is correct and the score quota met, the player is evaluated on the total number of power-ups swiped, the time it took to beat the level, and several other factors.

Float On is a standalone game mode, but is also the mini-game that follows each Mizz Spell level. The basic premise involves the player guiding letters (transmogrified into balloons now) into a book that flies back and forth on the screen, spelling out the word just completed in the previous Mizz Spell level. This mode employs tilt controls to guide the rising balloons into the shifting book. Additionally, Float On features obstacles to pop the balloons like long needles that drift from one side of the screen to the other or giant caterpillars that cut through the gamespace diagonally. Essentially, there is little to this mode; it appears to exist simply to break up the monotony of the central game that the other three modes riff on.

U Genius, another game mode, offers the same basic premise as Mizz Spell except you have more room for creativity and improvisation. In this mode, instead of correcting the spelling on a provided word, the player is given a blank slate to create whatever words possible using the random letters provided. However, the randomness of the letters often results in a traffic jam as the player struggles to use or discard a series of consonants without vowels.  Fill the Gap mode features the same now familiar gameplay but instead provides a word missing a painfully obvious letter. Unfortunately, this mode feels like a shallow way of providing more to do in a game where there is already a lack of engaging mechanics.

For what it's worth, AbraWordAbra has a smoothly animated interface that recreates the environment of a patchwork magic show. In this way, the game features an attractive presentation that helps thematically connect the otherwise lackluster and far too similar game modes. Although there is strategy involved in the central mechanic of stacking letters, knowing what letters to discard, and forming multiple words at once in the U Genius mode, the actual experience of playing AbraWordAbra can be tedious at best and torturous at worst.

The Float On mode feels like it was added as an afterthought when the developers realized the main game did not offer enough variety, so it ends up feeling like an unnecessary distraction in an otherwise mediocre time management spelling game. Spelling games should feel creative, even as they offer restrictive rules and obstacles. Magic should provide glimpses into the impossible while still reassuring us of our grounded reality. AbraWordAbra does neither of these things. It is not a good spelling game, and while it may feel impossible at times, it fails to ever feel magical. Rating: 4.0 out of 10.

Parents: The ESRB does not rate App Store games.

Deaf & Hard of Hearing: Sounds and music enhance the experience but are not necessary to enjoy the product.