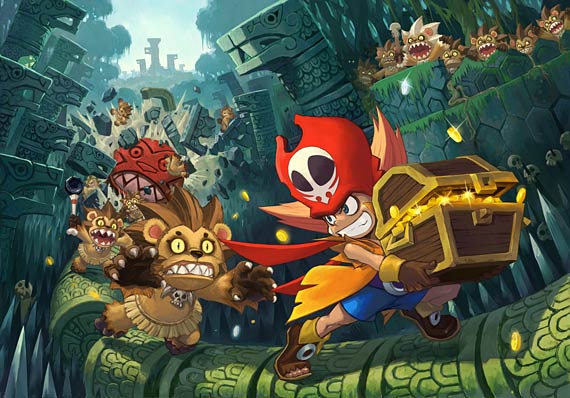 Cute. Stylish. Smart. These words are apt when referring to Zack & Wiki: Quest for Barbaros' Treasure.  The game melds devilish puzzle solving with a bold, stylized look and an adorable golden monkey. Although it's a mystery to me, gamers by and large seem to love monkeys. So everybody wins, right? For the most part, yes.

Zack & Wiki throws the player into an interactive world where pirating and plundering are the order of the day, as long as there is booty involved at the end of the adventure. Opportunities to reap treasure abound for the bold pirate – the bold pirate in this case being the titular Zack, a young boy strangely obsessed with eating candy bars whenever the player lets him stand around too much. He is accompanied by his faithful helper Wiki, a flying golden monkey who exudes more disarming cuteness than Hello Kitty.

The game utilizes a point-and-click system, combined with Wiimote gestures, to present environmental puzzles which require interaction from the gamer; the clever use of the Wiimote is what makes it stand out. It wasted no time in teaching me the game mechanics through a perilous introductory adventure, where my semi-quick thinking (this was a tutorial, after all) was needed in order to survive while the fundamental mechanisms of playing Zack & Wiki were illustrated.

This is where Wiki comes in handy. Not only does he hover around Zack like a little helicopter, but he can turn into a bell via shaking the Wiimote. This seeming gimmick lets the player turn creatures into tools. Every creature encountered can become one specific tool, including a hand saw, umbrella, and even a grip extender. These tools can be further utilized  to assist with solving environmental puzzles. 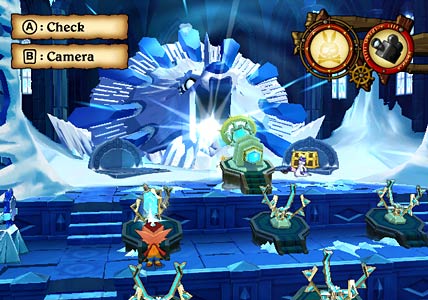 Basic puzzles involve sawing wood or lighting torches to proceed. Or an Indiana Jones-esque trap disarmament is required at one point. Things get more complicated, and sometimes the use of an object isn't immediate; or an available object might be a red herring, which kept me on my toes. The environment itself provides some manipulation requirements also, as in a level where a fountain must be utilized to create a key out of ice.

The environments vary but follow themes: jungle ruins, ice temples, fiery caves and so on. The puzzles start simple, but get more involved as the game goes on. One level took me multiple hours to solve: it was a boss fight that required some timing (to avoid being frozen to death) and some quick thinking (to route a beam of light via reflective mirrors). The puzzle changed slightly each replay, and the final step was never evident to me, so it took me a long time to figure out. For the most part the puzzles are solvable without assistance, but they can rack up challenges – and frustrations, particularly where there is an object whose means of manipulation isn't obvious.

For example, one area utilizes a Simon-says style routine with the d-pad, and I didn't realize the d-pad was even used for control. The loading screens always remind the player that "holding the remote is key," and it's true that the Wiimote is manipulated like the item interaction is occurring with. So the Wiimote might be scooped like a container to draw water, or turned to place an item correctly into a slot. I don't know that I'd consider that as "the key" but it's important to get to grips with. Enough so that the developers include an area where, after completing a level, the player can review items and how they are interacted with. There were a couple of instances where I'd have preferred to have this help available during a level.

Sometimes a level might be too challenging to solve, and after an hour or more on a puzzle, a gamer might be too frustrated. What to do (aside from reverting to gamefaqs.com)? Zack & Wiki thoughtfully provides an in-game hint system, assuming the player has purchased the requisite hint tickets. This allows a bizarre grandmotherly rabbit-in-costume to drop in to provide a hint. Or a revive, should Zack meet a humorous, albeit unfortunate, death. 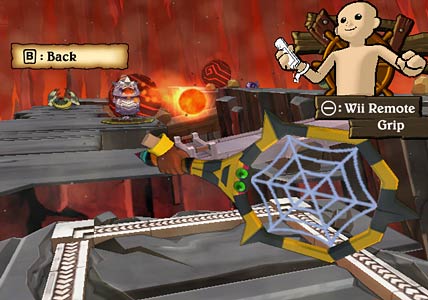 Most times I just started the level over, rather than squander a restart, because I come from the old-school hoarding mindset (i.e. stocking up on potions and healing items as per traditional RPGs). For the shorter levels, it's not such a big deal to restart. The above-mentioned boss level that gave me such frustration was one where I finally expended my revives because I'd been through the level so many times, it was becoming painful to redo the whole thing each time. Although the game thoughtfully lets the player skip cutscenes, it's still time-consuming to redo levels with many steps.

And therein lays both the brilliance and the frustration of the game. Solving the puzzles can be fun, and when everything just fits into place and the level's challenges are overcome, it provides a real sense of accomplishment. But when part of the solution is non-intuitive or hits a gamer's blind spot, then Zack & Wiki  is truly frustrating.

The level of enjoyment may thus depend on how patient the player is. I truly loved this game until I hit the boss level in the ice world. I've never been good with trajectories, and as a required aspect to solve the level I mentioned above, I had a hard time arranging mirrors at the correct angle to reflect a beam of light exactly where I wanted it to go. And the final step of this level's ultimate solution was unintuitive to me.

Frankly, I had to cheat, and even after seeing the solution I think it would have taken me several hours to figure out. Still, after this level, I moved on without such difficulty, so overall I suppose the game is well balanced. Occasionally I had a hard time using the Wiimote to direct Zack precisely where I wanted him to go, which also caused me a few deaths, but I can't say that bothered me too much.

Overall, this is a very fun and slightly quirky game, with a definite challenge to it. The look and sound puts me in mind of Powerstone from my beloved Dreamcast; and although Zak & Wiki lacks the fast-paced smack-talk-inducing gameplay of its stablemate, it's got a lot of charm and style in its own unique way. I don't see this as a game with replay value, because once the puzzles are solved, it's generally too tedious to try and solve them faster in order to score more points. Yet the first travel through is a fun one, provided the player has a little bit of patience or persistence. I'm glad I had a chance to learn that colorful scorpions and nighttime bats could be put to industrious uses when in a predicament! Rating: 8 out of 10

Althougth it has a kiddy style wrapping like most other Wii games this one is actually a hidden treasure. The game is split into various themed ‘worlds’ each on made up of about 8 puzzle solving games. Those who have played the classic Lucas Arts games such as the Monkey Island series will understand the kind of ‘collect items and work out how to use’ style to the puzzles. The graphics look great and the controls are quick and simple making the problem solving the focus of the game. At times the puzzles are really frustrating but thats the point,… Read more »