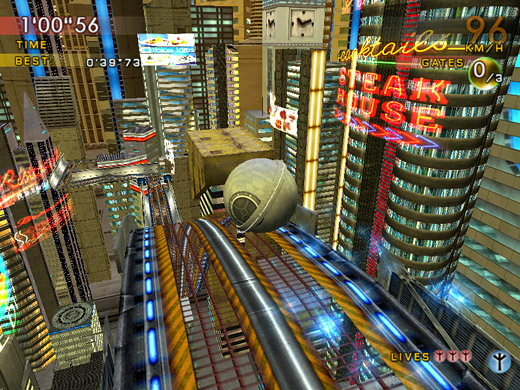 HIGH I was really happy to see a bowling mode included; this was a ton of fun for me in Super Monkey Ball.

LOW Why isn't the camera following my Xorb?

WTF What the hell kind of name is a Xorb, anyways?

Vertigo is a game that has a simple premise with a somewhat lackluster implementation. The player controls a ball called a "xorb" and must use motion control to roll the xorb through sci-fi themed levels of increasing difficulty; the goal is to get from start to finish without falling off of the "board." Upon loading up the game my first thought was of Super Monkey Ball, a ball-rolling game on Nintendo's previous console. Due to the fact that this game is about moving the ball and not the board, it would be more accurate to spin the heritage of Vertigo back to the arcade classic, Marble Madness. The interesting thing about Marble Madness is that it was designed around the use of a trackball for control, as with several games of that era, which includes one of my favorites Rampart. In my experience Marble Madness has not translated well to the modern era of d-pads and analog sticks. (Sadly, neither has Rampart.) How then does modern stablemate Vertigo fare in this era of motion control?

As is expected for the genre, the gamer must roll the ball through themed levels consisting of ramps, winding paths, hills, holes and corners to reach the end goal. The dangling carrot is the rush of getting through the maze without falling, usually with a short amount of time, which awards medals in the career mode (used for upgrades to the xorb). Arcade mode provides time-attack play: I had to get from start to finish while the timer counted down. I admit the ever-ticking countdown is as effective motivation for me today, as it was a few years ago. Career mode provided a more leisurely pace, where it was nice to be awarded a medal but it was equally rewarding to try and hit strategically placed pick-up spots.

This ball-dropping game has two means of control: the Wii remote as a motion sensor, and the Wii Balance Board. I don't own the latter, so I had to use the stock controller.The goal is to shepherd the ball through each track and get from start to finish without falling off. This was the sticking point for me; I didn't like tilting the Wiimote around to get the ball rolling. Moving forward was the worst, because to get the ball rolling forward at full speed required holding the Wiimote pointed down in a nosedive, which was uncomfortable for my wrist and arm. This is quite a contrast to the exquisitely tuned analog stick sensitivity of Super Monkey Ball.

The other issue I had was that the camera didn't do a good job of following me around, so I had trouble maneuvering—which consequently means falling off the track. The camera can be tweaked with the d-pad, but it was enough for me to try and tilt the Wiimote to awkward angles without trying to nudge the d-pad simultaneously so that I could get a proper viewing angle. This was a frustrating combination for me, and contributed greatly to my lack of interest in Vertigo. Had the nunchuck been used to provide a "boring" but standard control method, or even an extra way to manipulate the camera, I'd have been a lot happier with this game. And presumably more successful at it.

I appreciate that the developer included a bowling mode to add value to the game. As mentioned, Super Monkey Ball's bowling gave my friends and I a lot of extra game time. Sadly, I couldn't get the feel for this mode. The very first "lane" involves a long track, upon which the Xorb must roll and cross a small break at the end to reach the pin area. The very first roll made it across, and after that I kept falling down, and I had no idea why. There's not much to it: tilt the Wiimote all the way down (that uncomfortable position again!) so the ball goes at full speed. There is no jump, it's all rolling the ball. It mystified me, and after ten or twelve tries I gave up. This game wasn't going to live up to my hopes for it.

At the end of the day Vertigo seems to be a decent core idea for a game wrapped in a lackluster package. There have been other successful games in this genre but for me, Vertigo doesn't live up to that legacy. I'm curious if the balance board makes a difference, despite the camera problems I experienced. I suppose I'll never know. Excuse me now, I hear Super Monkey Ball calling. Rating: 5.0 out of 10.

Disclosures: This game was obtained via publisher and reviewed on the Wii. Approximately 90 minutes of play was devoted to single-player modes.

Parents: According to the ESRB, this game contains mild fantasy violence. Balls rolling, balls flying, balls battling… it's a bunch of balls that may take damage; but the game is free of any innuendo found in this review. I think Pokémon is probably more violent than this.

Deaf & Hard of Hearing: This is an arcade game where sound does not factor into the gameplay.