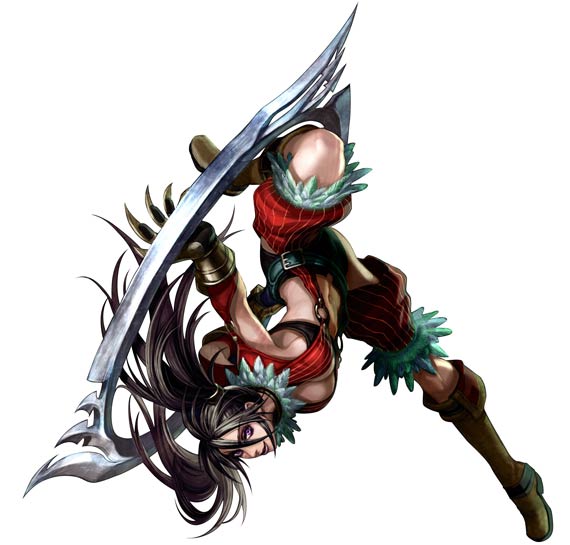 HIGH I'm not what you'd call a Star Wars fanboy, although I grew up with the series. However, whoom-ing a lightsaber while playing as a menacing Darth Vader was a strangely satisfying experience. Did I mention that Darth Vader is cool (PlayStation 3 only)?

LOW Realizing that I'd rather be playing Soul Calibur I or II, where the characters flowed slightly faster (in my memory) and there were more interesting learning/adventure modes.

WTF I miss the days of non-hulking characters. Kilik and Ivy are seriously bulked, in their respective fashions. And Ivy is beginning to remind me of a drag queen.

"Soul Calibur… IV." That familiar announcement leads into the opening screen for one of the lushest games I've played on the PlayStation 3. The Soul Calibur series is a weapons-based fighting game which originated on my beloved Dreamcast when the original game was released back in 1999. Nine years later and it's still around, now in its fourth incarnation. The update brings slightly evolved gameplay mechanics, new solo modes and online play along with its roster of familiar faces and a few new entrants, all ready to spar amidst a variety of realistically rendered locales.

Frankly, I mostly wanted to try this game to experience the heavily promoted character customization. I'd seen online the recreations of the Final Fantasy VII cast, and Dorothy vs. the Wicked Witch of the West. This user generated content really appealed to my inner artiste. What kinds of virtual avatars and celebrities could I create? I liked the idea of making a playable character all my own, that I could use in the game. It made Soul Calibur IV something more than just another fighter. Being able to create personas of people relevant to me also had humor appeal. I wanted to see what I could create. (It just occurred to me that I should attempt a virtual Sophia Petrillo, in honor of Estelle Getty, who died this year. Too bad I can't use a bamboo purse as an in-game weapon.)

The game starts with basic items that can be purchased, and through playtime in the various modes, I earned more money with which to buy an increasingly available number of clothing and accessories. I had a lot of fun playing around with the character editor, making a Kilik-based Greek Hermes look-alike and a voluptuous female version of Voldo (minus the bondage gear). That was good stuff! Customization definitely made me feel more invested in the game through my avatars. 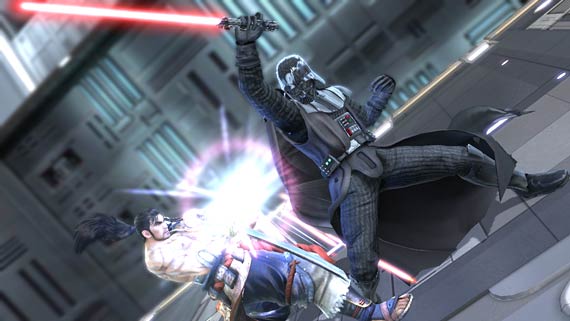 Playing the game wasn't as entertaining as character creation. After the novelty of using this installment's main licensed character-Darth Vader-I got down to business as Kilik. I'd put in a lot of time back with the original Soul Calibur on Dreamcast, and its sequel on Gamecube. So although not an expert at the game, I do have past experience. I didn't find it very helpful in this iteration.

My now-steroidal Kilik handled well enough, but settling into the game's dance of move and counter-move was awkward for me. I remember the first two games having modes to ease me into gameplay. That was sadly lacking here, and I found the game less accessible for it.

Arcade and Story modes will be no surprise to players, being staples of this genre. Story mode is fairly quick, being a few rounds for each character; Arcade mode is lengthier and more challenging. New this iteration of the series is the Tower of Lost Souls, a mode to accommodate solo play and a chance to earn customization loot by fighting battles in the context of ascending or descending a never-ending tower. It's a nice way to earn more items to use in customization, but frankly I found it somewhat boring. I'd have rather seen this mode fleshed out with a detailed storyline to keep my interest beyond the challenge of meeting winning conditions of each match.

My verdict is that Soul Calibur IV looks great, but isn't especially accessible to newcomers. The characters have a subjectively sluggish feel relative to the older games, and I wish there was a more comprehensive tutorial mode. The practice mode is okay for learning movesets, but I miss the old adventure mode that trained me along the way. It can be an enjoyable game, especially when pulling off signature moves, just expect to put in some serious, repetitive practice time to get the full experience. Rating: 7 out of 10

Disclosures: This game was obtained via publisher and reviewed on the PS3. Approximately eight hours of play was devoted to single-player modes and one hour of play in multiplayer modes.

Parents: According to the ESRB, this game contains partial nudity, violence, sexual themes, mild language. You should find this game acceptable for the typical teen audience, assuming you don't mind that this game is all about beating the (virtual) opponent senseless. There is a fair amount of cleavage and skin that can be viewed on the game's characters, but there's still less than will be seen on some mainstream television shows and movies targeted at teens.

Deaf & Hard of Hearing: You will find information relevant to in-game story (yes, there is some) is handled by subtitling.