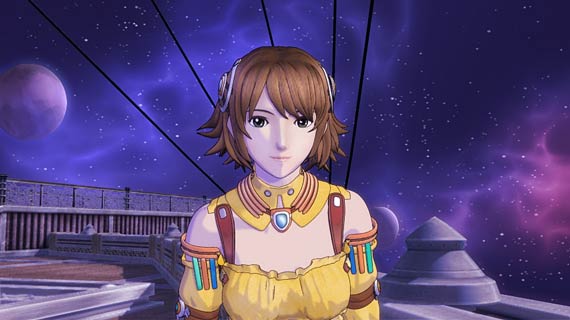 Readers familiar with my writing for GameCritics.com have undoubtedly noticed that I gravitate towards the role-paying game. And not to just any type of RPG, but that of the Japanese variety, a quintessential re-enactment of a predetermined storyline throughout which I can explore a new world and its denizens. If I look at my earliest gaming history this fascination starts with the very first Final Fantasy (NES), which in turn stems from the love affair I had growing up with then-newcomer Dungeons and Dragons. For the purposes of this review, the game I want to summon forth from memory is Final Fantasy VII. Rogue Galaxy and Final Fantasy VII are quite different games, each defined by its makers' experience and the technology available at the time, so a direct comparison of the games is meaningless. Yet each of these games evoked from me a similar sense of wonder: the sense of exploring an unknown world, seeing wonderful new sights and giving my imagination something to build upon in my mind.

I still remember my first brush with Final Fantasy VII, perhaps three years after the game was released. I was returning to gaming after an absence and wanted to experience Symphony of the Night. Recognizing the Final Fantasy brand, I also picked up VII. What an experience that turned out to be. The opening credits showed me the urban sprawl of Midgar nestled up against a cold Shinra factory, and rushed me into action accompanied by a rousing musical march. I was thrown quickly into action and started learning bits and pieces about the world around me as I went. Rogue Galaxy starts out in similar fashion, with a nice animated sequence in what I think of as signature Level 5 style, and while giving me a brief background of this war-enslaved planet, the games thrusts me into action.

One of the best things of Rogue Galaxy is how good it is at pacing information, new abilities, and general game options. Throughout the first part of the game, there are continuous mini-tutorials that served to educate me on protagonist Jaster's basic fighting abilities, battle flow, item usage, how special abilities are unlocked and so on. I like games that don't require me to crack the manual unless I feel I need more in-depth information, and Rogue Galaxy fares superbly in this regard. 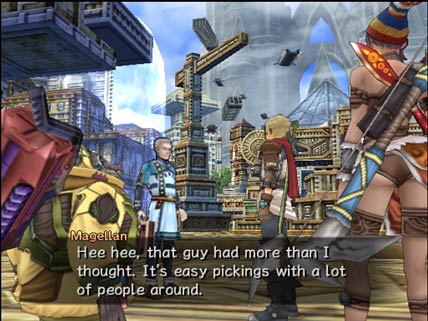 The fact that the game always seems to have something new available for players is great, and it contributed to making me want to keep picking up the controller. I've already mentioned that as the game went on, I learned basic actions. As part of that I learned about weapons, and how weapons gain experience. Later, I learned that a maxed-out weapon is eligible to be combined with others; and the number of apparent combinations available is staggering. (I'm sure I only got a fraction.) For me, it was addictive to max out and combine as many weapons as I could. When I thought I had it all with weapons, I then learned that there is a reward for obtaining weapon recipes and combining a certain number of these recipes. At a point in the game where I thought there weren't any new features available, I learned about the Factory, an item creation system that is like a basic logistic puzzle, based on obtaining blueprints from characters throughout the galaxy.

I realize that it's become popular to disparage Final Fantasy VII nowadays, as that game hasn't aged all that well; a certain class of gamer dislikes the popularity it achieved due to the unwashed PlayStation masses; it does suffer from dubious localization in some respects. Still, looking at the game as a product of its time, and acknowledging the fondness I still hold for it, Final Fantasy VII had a pretty good story. Rogue Galaxy, however, beats it hands down.

Like Final Fantasy VII, Rogue Galaxy also has a malicious world-shattering entity, but the similarities end with a supposedly feminine archetype. Whereas JENOVA seemed rather vague except through her influence of arch-villain Sephiroth, the entity in this game is a hungry and malicious being who thrives on the idea of absorbing other life. (To go into more detail is to spoil the story.) And of course there is an entire galaxy at stake, rather than a single planet. The storyline is woven masterfully throughout the game, as all aspects of the plot and secondary character arcs deftly slide through and around the main storyline much like the heroes' spaceship maneuvering to avoid enemies.

The concept of hero seems initially questionable, since the main protagonist Jaster ends up masquerading as someone else in order to join a band of space pirates with a variety of distinct personalities on board a space-faring pirate ship. Some of these personalities are the first of the seven characters who will join Jaster's adventures, and I think I can say with confidence that I've only once played a game where every character is so thoroughly defined, each with his (or her) own motivations and back-story, all of which serves to further the main storyline. Final Fantasy VII had a thorough cast of characters, some of whom were quite endearing; but I have to wonder, how many people actually found Cait Sith or Yuffie to be a truly useful member of the party? With Rogue Galaxy, every character eventually pulled his weight, and even the two characters I was unsure of grew to be valued members of my party. The fact that all of these characters were useful, entertaining and generally likeable is a testament to the mastery of the story designers. 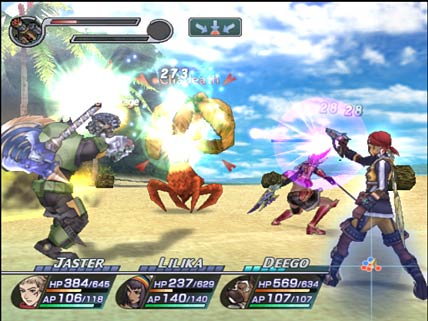 The gameplay itself isn't complex, and is quite enjoyable. I found it easy to get into the rhythm of battles. Equally, if I was distracted, this seemingly straightforward system wouldn't work for me, and I'd struggle to survive; it wasn't just button-mashing. It's definitely more involved than the maligned keep-hitting-attack-button strategy of classics like Final Fantasy VII. There is a concept of hack-and-slash with the real-time battles, with judicious use of special abilities thrown in for good measure.

The special abilities are creatively thought out. One of the more interesting requires the rather demure and cute Kisala to pass gas into a sock, which she then uses to create a poisonous stench cloud. The blue alien Jupis has an attack increasing skill that involves sniffing and drinking what looks to be a delicious cup of coffee. Various combinations of the team can also do special attacks together, such as the two ladies doing a lethally damaging dance, or one character shooting another out of a cannon. Not everything in this game is serious or somber; there is a lot of humor!

Rogue Galaxy provides a good example of how far the RPG has come from the days of Final Fantasy VII. Back then, flashy visuals and cutscenes wrapped around a basic gameplay mechanic (materia did liven things up a bit) was sufficient. There was of course an epic story that involved saving the world, and although melodramatic, there was enough flare to the basic idea that it really engaged my imagination. Fast-forward to Rogue Galaxy, and here is a gameplay mechanic bursting with almost as much variety as its characters, along with an epic story that manages to feel fresh, full of little touches that make the characters all feel like they belong to it, rather than being grafted on. This is the first game I've ever felt compelled to put in eighty-five hours with, which includes part of the post-game optional ghost-ship dungeon. Overall, I was quite impressed with Rogue Galaxy, and as one of the presumably last RPGs for the PlayStation 2, I think it's a fitting tribute to the machine that is home to the most games of this genre. Rating: 9 out of 10 pirate ships.

Your review makes me want to pull this game off the shelf again. I stopped playing it after the first 90 minutes or so because the nonstop tutorials and copious dialog, even for an RPG completely sank it for me. Maybe I’ll give it another chance this weekend if the Forza2 endurance races get too frustrating.

Jason, interesting take on Rogue Galaxy by comparing it to FFVII rather than Level 5’s Dark Cloud 1 & 2 as most reviewers did. By doing so you showed how the RPG genre has actually evolved quite a bit over the last 10 or so years even though most people refer to the genre as “stagnant” and “without innovation.” I did enjoy the game, not quite as much as you did, but it was worth the time and the money. By biggest complaint is that the game is simply too long. It took me about 43 hours to get through… Read more »