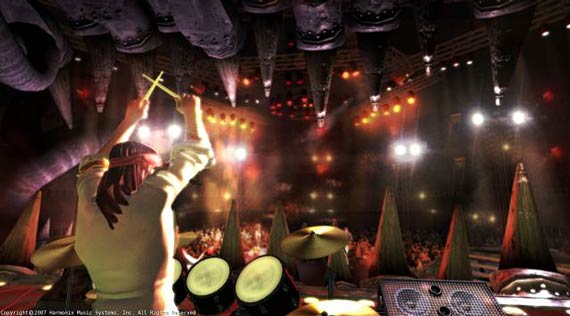 Celebrity culture and status seem to be at an all-time high in pop culture right now, and musicians are often to be seen in this sweeping spotlight of fame. Kids have always fantasized being pop stars; the likes of Disney keep pumping out fantasies of fame through musical vehicles like High School Musical, Hannah Montana and Camp Rock; and American Idol chugs along season after season. Harmonix rides that wave to produce the next vehicle in the musical fame fantasy-land: Rock Band. Whereas the above-mentioned media tends to focus on the bubblegum chewing younger set, Rock Band skews for an older audience and successfully puts players in the position to establish fame and fortune as their ability to rock out puts them on virtual concert tours.

There is a basic solo mode, but I'm going to talk about the heart of Rock Band, since it's where I've focused my playtime: the multiplayer Band World Tour. Rock Band seems to work best multiplayer, and given its nature I'm sure that is intentional. The game isn't just about tapping on a typical controller. It uses that sometimes-dirty word in the gaming community: peripherals. The game supports up to four players, and thus drums, bass guitar, lead guitar and vocals. The purchased box includes an actual drum kit, a guitar, and a microphone. (Two guitarists will warrant the purchase of an extra guitar.)  A USB hub is included with my PS3 version to support those with fewer than four USB ports.

Rock Band requires its virtual musicians to "play" along with actual, licensed tunes, courtesy of Harmonix and partner MTV Games. A difficulty level is chosen, and specific songs may be offered by the game (playing them unlocks them for continued use), or setlists may be created by the players using unlocked tracks. Sometimes the setlist is pre-defined and the gamers may or may not be able to see its contents until play starts. This can be a challenge, especially for songs not practiced, but it keeps players on their toes. The gratification of doing well on a two- or three-song set is a hook to bring me back for more. I've seen sets of eight to ten songs, but I'm not prepared yet to go through that many uninterrupted in a sitting! 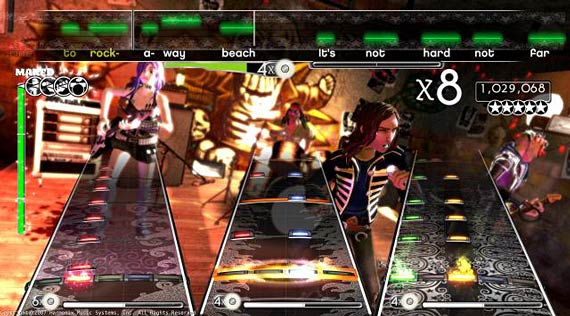 Gameplay is about keeping in time or in tune. Playing well keeps the crowd happy, earns points and ultimately more fans. The guitarist in particular can show off with some solos, allowing for big points and depending on the tune, maybe a big finale. All the instruments can kick into overdrive at times, which improves the fan reaction to the band. This can be important because if any one player is struggling to keep up with a song, another player can kick into overdrive and save the day, bringing the poor player's performance gauge back up to snuff and keeping the band on stage. (I've not had it happen to my group yet, but a band can be booed off stage for a crummy performance.) I think the vocalist is the one who suffers most, because his overdrive is fairly limited, can only be used in pre-determined locations in the song, and doesn't really do much. The vocalist doesn't have any solo options to rack up extra points like the other instruments. In general, I think vocalist is the weakest in terms of being integrated into the game, and I hope Rock Band 2 will address this issue.

So far, Rock Band sounds like a typical music game with specialized peripherals. But wait-just like with the Magic Bullet infomercial*, there's more! A group of gamers is welcome to jump in and fire off some songs at will using randomly supplied characters, but the World Tour and related customizations is where it's at. If a group of players want to conquer the globe in style, the first task is to customize their virtual selves, and there are a lot of options here. Pick a general face, height, build of body; then get into finer details: hairstyle, hair color, eye color, skin tone… then segue into clothing, which can be adventurous. Stiletto heels and leopard print short-pants for her? Should he buy a baroque overcoat or a skeleton-print t-shirt? There are a beguiling variety of clothing options, ranging from serious to wild to funny. Completing a gig earns money, used to buy clothes and accessories.

Frankly, during a frenzied play session, a dedicated rock musician is probably too busy making music to pay much attention to the band rocking on the TV set. But it's neat to see the band there, the customized characters playing their hearts and souls out with the gamers. The band is onstage with venues that are very nicely realized in the game, and which get bigger and more elaborate as more locales are unlocked. The venues are varied and the camera is dynamic, as are the performances. Any onlookers are sure to be entertained, whomever they are watching. There are also little visuals that pop up throughout the game, such as snapshots of the band as they might be captured when not playing, or even album covers that utilize band members' profiles. 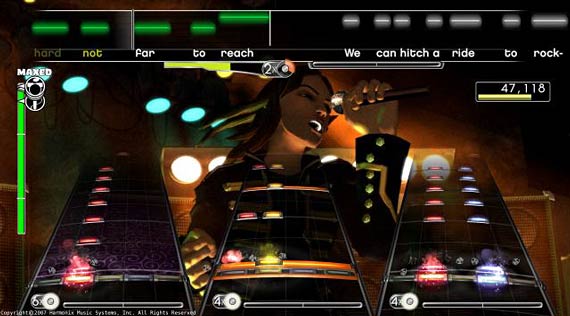 The music is varied as the characters can be but definitely leans towards rock, in the sense of guitar-heavy music. Aerosmith, The Rolling Stones and Blue Oyster Cult are available alongside Weezer, Garbage and Radiohead. These are not likely to be of interest to the Disney set (thank goodness!), but many of the included songs interest me. Even some songs I didn't know, such as Maps by the Yeah Yeah Yeahs, are enjoyable.

One of the best features of Rock Band is the downloadable content. New songs are released regularly for purchase via the Microsoft and PlaySation Network stores. This allows the gamer to customize his song library by adding songs over time, and it keeps the game from getting stale by playing the same songs over and over. It also increases the likelihood of finding favorite songs to personalize the music collection. I personally was thrilled to be able to buy and belt out Synchronicity II and Hanging on the Telelphone.

Rock Band is admittedly a financial investment, but for the gamer with at least one friend who enjoys music, I think it's worth it. Touring the world, earning fans, finding roadies, and winning a contest to get a private tour jet; these rewards are all very addictive. I enjoy every time new venues are available, especially when new cities open up, which also means new songs are available to play and unlock. Customizing and mixing up the look of my character gives me that sense of personal investment in the game, and it's a plus that tattoos aren't permanent in the world of Rock Band! Honestly, it is a bit of a rush to have a great performance and hear the entire audience singing along with me; for those few moments, I can imagine being a rock star (without the hassle of never-ending hotels, shady managers and nuisance of paparazzi). Eat your heart out, Hannah Montana! Rating: 9 out of 10

* The Magic Bullet infomercial always cracks me up. The similarly, "As Seen on TV" Vidalia Onion Chopper, on the other hand, is quite a handy gadget, although I've never seen the commercial for it. Recommended.

Note: Please be sure to check out the consumer guide for more information on the peripherals, customization and downloadable content.