According to ESRB, this game contains: Lyrics, Mild Suggestive Themes 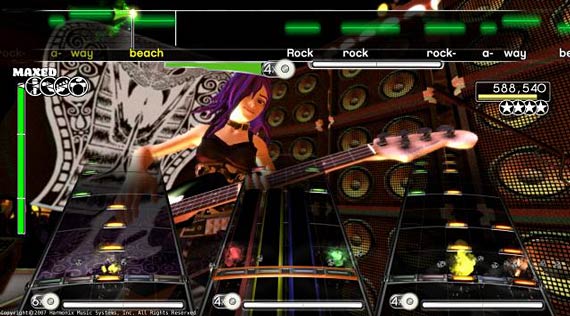 Parents shouldn't find anything really here, unless they don't like the kind of music that's been playing on commercial radio since the 1970s.

Fans of customization in games will have a field day building up customized rockers to be their in-game selves. There are plenty of options to build up hairstyle, clothing and accessories.

For extra pizzazz, the players can create tattoos. A system that at first looks like a boring bunch of pre-made pictures can have surprising depth, by assembling, manipulating and layering a variety of set shapes. This same system creates the face paint and an optional band logo, which is incorporated into various places during sets.

How important is downloading music to expand the game? The Xbox 360 and PS3 support downloadable content (DLC). I know that there are PS2 and Wii versions of Rock Band that do not, since these systems lack storage facilities. I understand that these "lesser" versions of the game also strip out the customization abilities found in the 360/PS3 versions. There is some expandability available in the form of Track Pack discs which provide a bunch of new songs for sale in disc format. For the gamer with a PS2/Wii, this allows them to still experience Rock Band albeit with fewer options. The PS2 game with hardware is also substantially cheaper at the time of this review. I considered one of these versions myself, as I didn't yet have a current-gen system, but ultimately I felt DLC was the way to go, and I don't regret my decision. I think these things should be considered by potential owners depending on your platform of choice.

Is the hardware built to last? The hardware is decent, and I haven't had any major problems yet. The guitar is equipped with a motion sensor to permit activation of overdrive by tilting it; this didn't work out of the box. The alternate press of the guitar's select button has sufficed meanwhile for my guitarist. Indeed, the guitar and drum kit both contain full controller facilities for navigating menus. The guitar works with a wireless dongle, the other instruments stick with a cable. Other than the guitar issue above I don't have any complaints about the peripherals. The guitar feels a bit light; the drums feel fairly solid. I'm not a drummer by nature, so I found the foot-pedal a bit tiring. I suspect having a chair of correct height would remedy this problem. The microphone is a basic USB mic, with a comfortable heft that reminds me of my actual Shure mic.

Deaf and Hard of Hearing gamers are going to be left out, given that this is a music game.