I think Brandon is spot-on with his assessment of Odin Sphere. This is a game that appeals to everything that hits my gaming hot-buttons. As Brandon's lead-in mentions, the game has an "intricate storyline, gorgeous old-school 2D graphics, exciting side-scrolling beat-‘em-up action." It even lets me grow cute little sheep from plants! What's not to like about this combination? Unfortunately, the answer to that question lies in its gameplay, the bread and butter of what seems to be an action-RPG (role-play game).

I started playing the game, which opens with the death of the protagonist. The game's plotlines continue along in this vein, with a story that is well-told and mature (in the adult sense) compared to some of the angst-ridden teeny-bopper stories common to many Japanese role-playing games. Themes of unexpected love, loss and self-worth are woven into the heavily layered plot, of which Brandon gives a good overview. The 2D look of the game provided my doorway to entry into Odin Sphere's universe, but its story immediately grabbed my attention and held it. I couldn't help initially but to marvel at what was promising to be an above-average story, utilizing multiple viewpoints as a less-taken way of seeing the tapestry.

And oh, the 2D look! The artwork is simply gorgeous, and this is one of the best looking pieces of 2D gaming goodness that I have seen on the PlayStation 2. Everything is colorful and vibrant, utilizing palettes appropriate to the current level, whether a lush green jungle or a bleak and barren underworld. The backgrounds are alive with movement; there is always vegetation shifting in a breeze, or the movement of creatures native to the environment. The enemies are imaginatively animated too. One of my early favorites is the honey bear, who growls and attacks with his claws while holding a cup of something (perhaps mead!). When the bear is left alone, however, he'll imbibe of his cup and sink into a healing sleep (or mead stupor). It's the little polish of details like this that really contribute to elevating this game well above the expected for even the most modern of 2D titles. The whole look reminds me vaguely of medieval artwork and Lewis Carrol. 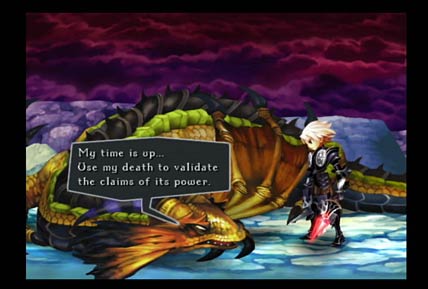 Sadly, after getting past the look and story, I found the gameplay to quickly become stale. Brandon describes the battle mechanic well, and it truly does boil down to using a strategy of hitting an enemy three or four times, then running away. Interestingly, I didn't find the ability to block useful either. I think this game is more about resource management than hack-n-slash, however. As the game proceeds one can access recipes to develop potions that augment the player's abilities in terms of attack, defense and healing. Seeds allow the player to grow items, some of which can be taken to a restaurant to create better healing items, or used for minor healing. This means that the hit-and-run stratagem requires some planning to create potions and grow plants in real-time, which frankly, I found awkward more often than not. The alternative is to grow items after clearing a level, which pads the game time and gets old after the novelty of growing sheep plants wears off.

The boss fights are notable in that the bosses are often bigger than the screen. The animation detail is apparent, and the bosses are all unique in their attacks, although the player is still down to the same hit-and-run tactics used with lesser enemies. This was also the weakest spot of the game for me, because the bosses are insurmountable without a good stash of items in stock, and I found it hard to have enough of the right item in stock by the time I got to these boss stages. Due to the sheer amount of hit points relative to my ability inflict damage (save for my occasional special attack maneuver), these battles were also long. Too long in my opinion.

Like Brandon, I'm disappointed that I didn't enjoy Odin Sphere more, because it has the germ of a good game that could certainly be grown into something truly engaging in all respects. I think this is a game the developer did create as a labor of love. But the repetitive gameplay let down the excellent story and above-average 2D look. I'd rather have seen this game be less about resource management, and more of a beat-‘em-up. Although I ultimately found Odin Sphere disappointing, I will keep an eye on developer Vanillaware, because I'm hopeful to see them build on this experience and achieve a fantastic 2D game. Rating: 6 out of 10 sheep.

I really wanted to like Odin Sphere when i got it, because I love 2D games with nice animations and Odin Sphere has some of the nicest 2D graphics / animation I’ve ever seen in a game. The gameplay though just felt dull and it couldn’t hold my attention. The game’s story wasn’t engaging either. They could have done a lot better imho.

While I respect your opinion, I don’t agree with it. Odin Sphere is not a disappointment, it’s a freakin’ miracle for 2-D games. The battle system is fun and actually requires strategy. The developers from the start said THIS WAS NOT a traditional RPG, and just because there is not an overworld map does not mean there is reason to cry. The story and characters drew me in to be honest. A game can have the most awesome graphics in the universe, but that doesn’t mean I’ll play it just BECAUSE it has the graphics. I think people make too… Read more »