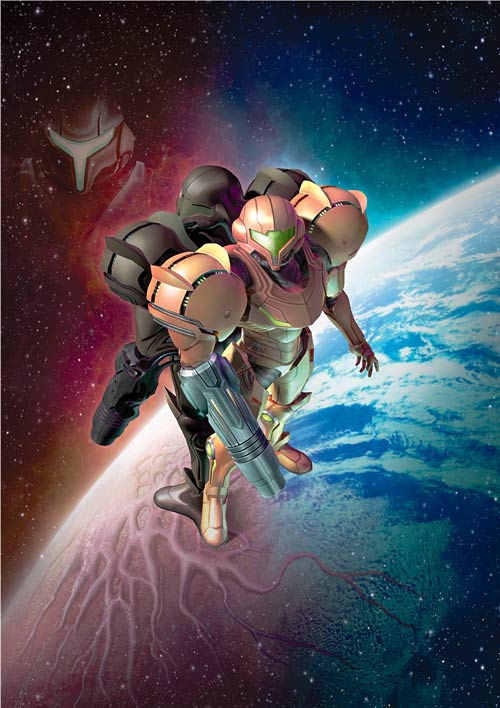 Being a game critic is sometimes a difficult task. Some games are a joy to play and review, whereas a bad game turns reviewing into a voluntary form of torture, like sitting through a Britney Spears "comeback" performance. Metroid Prime 3: Corruption is, fortunately, a game that evokes something of that joy and wonder for me. Corruption is the thoroughly polished conclusion of the Prime trilogy, which was an initially unexpected take on the classic Metroid series. This new game takes the legacy formula along with its modern makeover, and gives the gamer a new world to explore through the eyes of its supremely capable heroine: bounty hunter Samus Aran.

Let me get down to brass (or brinstone) tacks, because frankly, the question likely to be burning in gamers' minds is, "how does the control scheme play on Wii?!" Using a scale of pirates versus ninjas, the fear would be that this game controls like a wooden-legged pirate drunk on grog. Fortunately, the Wii controls infuse the game with new life, bequeathing the experienced player with the grace and deadliness of a skilled ninja.

Note that I said the experienced player. The first two boss battles in particular were frustratingly difficult for me; they required a lot of movement and agility to keep up with the actions of the bosses, and I hadn't come to terms with the swift movement and responses required on my part. On a more generalized note, I tended to morph ball when not wanted because my fingers took time to develop the muscle memory to hit the correct buttons to scan.

It took me a few hours to become proficient with the controls where I felt at one with Samus. After that, everything "clicked" and I proceeded through the rest of the game without control issues. Moving, locking on, turning… all became natural. I controlled my point-of-view by moving the Wiimote, which would have grown tiring except that I was able to rest my hand on my lap. Combined with the nunchuck for Samus' movement, the setup was precise and responsive; and for this game, preferable to a standard controller. Shooting was very accurate, although I initially felt out-of-place without the lock-on aim that I recalled from the last Prime games. For the record, players can lock on and strafe around enemies, but they still need to have accurate aim with the Wiimote to target them successfully. 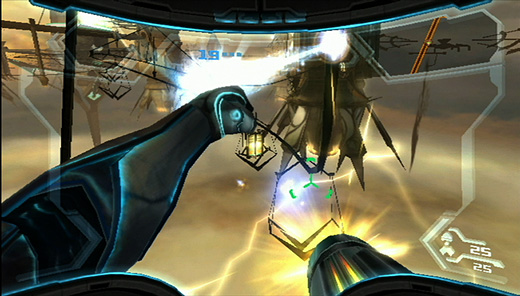 Samus must constantly visit unforgiving places as de rigueur. Making the player one with the capable Samus to create the sense of immersion in these harsh environments is something this game achieves with moxie. Corruption is big, and ups the ante by offering something new to the console trilogy: exploring multiple worlds. The once-beautiful planet Bryyo is now a war-torn planet of primitives. An empty art deco city floating in the sky above its planet was a particular favorite. The dark side to this expansive galaxy is the actual process of travel. It's nice that Samus has a fab ship with controls that "Wii" can interact with. But enforced sky-watching as Samus left one area or atmosphere and entered another was time-consuming and grew frustrating.

As usual, Samus has her hands full with a variety of life forms intent on survival of the fittest. Breaking tradition with a series mainstay, Samus doesn't lose her inventory at the game's beginning. Rather, she begins with a basic arsenal and acquires upgrades and new gear as the game progresses. The weapons and abilities are used to solve puzzles and let the gamer proceed. The new grapple hook is my favorite, and is gained right away. It is used by physically "throwing" the nunchuck controller to send out an energy beam, in an attempt to latch onto certain surfaces or enemies. Something about the visceral interaction with this really grabbed me, and I enjoyed using the grapple throughout the game. The morph ball now allows a jump to be triggered with a quick flip of the Wiimote—convenient. It's worth noting that for some reason, I had a much easier time with one tried-and-true technique from the series: the morph ball double-jump, mainly used to access some tucked-away powerups.

Metroid Prime 3: Corruption is an expansion of its predecessors, and it builds on their legacy in every aspect. New weapons, more attack options, greater variety of bosses, more creative use of Samus' abilities to solve puzzles; it reads like a talented game designer's checklist. To say the game is competent would do it a disservice; it is a well-polished gift to both the Wii and to Metroid fans, and it puts the Wii's control scheme to good use beyond the mini-games. I think Corruption would be a solid entry in the series as a "normal" game using standard controllers, but the translation to such tightly-honed motion-control is what makes the game stand out most, and concludes the trilogy on a high note. Rating: 9 out of 10

According to ESRB, this game contains: Animated Blood, Violence

Parents probably won't have much problem with Corruption. There is plenty of violence, but it is only against odd space creatures, and, while intense, it's never notably gory.

Fans of the Metroid Prime series should definitely play this game. It really culminates the series with its excellently-tuned use of Wii controls, and in ending manages to show that Samus is a real person behind the mask.

Casual Wii gamers may find this too intense for their liking. I think the game is playable to "newbies" to the Metroid series, but to finish the game requires more commitment and skill than nightly rounds of Wii Sports or Cooking Mama. Don't get me wrong, I love Cooking Mama, but it's an entirely different challenge than an atmospheric science-fiction themed exploration game with lots of shooting.

Fans of first-person shooters aren't going to leave Halo 3 or Gears of War for Corruption. However, they might enjoy at least seeing how the Wii controls allow for a smooth first-person-based console experience.

Deaf and Hard of Hearing gamers will do just fine. A lot of the backstory is achieved through reading scanned data; and all spoken dialog is accompanied by subtitles, so nothing verbal will be lost. There are instances where an enemy may be heard before it is seen, giving warning of its arrival, but I don't think this would negatively impact the gameplay. Samus has a radar which shows the locations of enemies, which is more useful for pinpointing their locations.