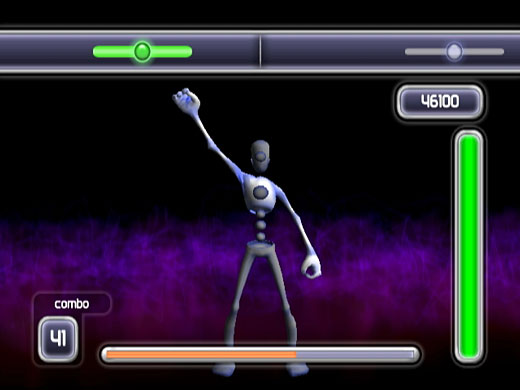 LOW Disappointment that there isn’t much variety beyond the core game.

WTF I could half-heartedly wiggle the Wiimote and still score.

Helix is a new music game on the Wiiware channel, and I could easily imagine the discussion: "Hey, let’s make a new game like Dance Dance Revolution! Except we’ll focus on moving the hands instead of the feet." For those who’ve never had the pleasure, Dance Dance Revolution is a music game which uses a mat peripheral and lots of techno/trance music to get a gamer physically moving. Scrolling arrows show where to put the feet on the mat; the game features abstract movies and music videos in the background.

Similarly, Helix features techno/trance music (thankfully never as airy as Ian Van Dahl) and has scrolling indicators that show when to move. However, this game is about waving and groovin’ with your arms. An onscreen guide shows the movements required by the player, and at the top of the screen, "move bars" scroll across to show when to perform those moves. It’s a fairly simple concept to grasp, and for a music game, that’s a good thing.

I confess to being disappointed by Helix. I think it's a good idea that was ultimately hindered by its platform. A game like this needs more accuracy for movement tracking, but as long as I waved the controller in the general direction expected (even if it was a half-hearted waggle) I scored for the move. Although that affects the gameplay, it's not a fault of the game; it's a limitation of the Wiimote's accuracy. The upcoming Wii MotionPlus would benefit a game like this. Helix is also just begging to use Miis rather than the generic, faceless robot used to guide the player's movements.

The biggest challenge of Helix comes from following the moves in the delayed fashion the game requires. Performing a move requires tracking two separate items: first the guide performs the move, then the move bar shows when and the approximate duration. This means moves are always performed in a delayed fashion after seeing them. When there are several moves strung together, it becomes a miniature game of Simon Says. This certainly provides a challenge, although the delay can be tricky.

Then there is the issue of music. I personally don't mind techno, and as with any musical compilation, the songs are hit and miss. Based on what I unlocked and the previews for songs I didn't, I think the musical selection is decent. It's an indie developer on WiiWare, so I'm not expecting big-name licensed music. I admit that I would have liked more variety to the backgrounds though. Helix uses a music visualizer throughout and it was functional but uninspiring. Again, it makes sense for WiiWare; but ideally I'd have liked more variety.

As a new music game, Helix sounded like a fun concept and I wanted to enjoy it more than I did. I just had a hard time staying with it. Taken on its own terms, the game definitely provides a challenge and some sweat—for the gamer that gets into the spirit and avoids cheating with mini-waggles. Perhaps some alternate gameplay options would have compensated for platform constraints, and held my interest longer. Maybe a Helix 2.0 will offer something I really want to shake my fist at. Rating: 6.0 out of 10

Disclosures: This game was obtained via developer. Approximately 2.5 hours of play was devoted to single-player mode (not completed), trying both easy and normal difficulty.

Parents: According to the ESRB, this game contains no content descriptors. I can’t see very young children playing this; it does require some coordination. Note that two Wiimotes are recommended for the best playing experience: one for each arm. There is nothing objectionable here, as might be expected.

Deaf & Hard of Hearing: This is a music game, and although playable without—the movements all have visual cues—I don’t think it would be a lot of fun. Since the music is also what provides Helix’s variety over time, I can’t recommend this one to the deaf gamer.