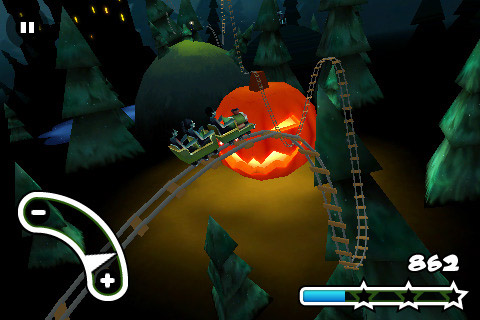 HIGH Look at that castle! That giant jack-o'-lantern! The moon!

LOW Aw man, I plummeted into a track again. Darn those vertical drops.

WTF I put the game down and I can still hear the background tune in my head.

Haunted 3D Rollercoaster Rush is a holiday-themed version of the non-haunted 3D Rollercoaster Rush produced by Digital Chocolate. The goal is take "toonies" for rides through a sequence of successively more daring rollercoaster experiences, racking up points and stars en route. I found the gameplay simple to pick up, and challenging to master: it was easy enough to tilt my through a track and figure out the tricky parts, but earning more than one star and not losing coaster cars could take a bit more work. The game is a good fit for the iPhone, taking into account motion control, the screen size and of course the need for bite-sized mobile gameplay.

A big selling point for me is the fact that this game is dressed up for Halloween. I'd previously enjoyed the free demo of the regular game, but I couldn't pass up the Halloween paint job on this version. The background music is reminiscent of the Addams' Family. (Those who find this repetitive can select their own music instead.) The tracks wind through a foggy nighttime park. They wind up the turrets of a haunted castle, around a giant jack-o-lantern and pass above a murky pond. The toonies who ride the coasters look like little zombies. I've even noticed clusters of fireflies! I love Halloween, and this kind of atmosphere is right up my alley.

The Halloween vibe is great, but without solid gameplay to back it up, Rush wouldn't do much for me. In this regard the game delivers. As mentioned, the gamer has to give toonies the fright—er, ride—of their lives. The immediate objective is to survive each coaster without a crash, which causes the hapless toonies to parachute to safety. The forty tracks start out with gentle ramps and curves, but work their way up to steep curves, tight dips, broken tracks and corkscrew loops. The controls are simple but brilliant: accelerate and decelerate, either by touching an onscreen meter, or by tilting the iPhone. When tilting the phone, the meter shows the speed change while the viewport (the gamer's view of the scene) stays level. It took me a while to get a feel for the proper times to speed up or hit the brakes, and even being over halfway through the game, there is room for me to improve my abilities.

The player racks up stars and points by keeping the toonies excited with their coaster ride. Building up speed and doing gravity-defying drops help with this. I found myself disappointed every time I finished a track without all three stars, and this gives me reason to replay tracks. Over time extra cars are added, and older tracks can be replayed with the extra cars, making it potentially easier to accumulate stars. I'd like to fill the stars for each track, as there are many where I just squeaked by. I always find myself wanting to see what kind of track comes next! Besides this standard gameplay, each track offers a star for winning a race, played against a phantom coaster controlled by the AI. It's possible to play multiplayer by racing against another iPhone owner, but sadly, this Bluetooth option is only available with two iPhone 3GS phones.

I found Haunted 3D Rollercoaster Rush to be well worth the purchase. It combines balance, variety and an even difficultly curve into a bite-sized package that I enjoy every time I sit down to it. It's a solid game with addictive elements in its own right, and the trick of its Halloween theme is a great treat. Rating: 8.0 out of 10.

Disclosures: This game was obtained via iTunes store purchase and reviewed on the iPhone 3GS. Approximately 90 minutes of play was devoted to single-player modes.

Parents: This game is not rated by the ESRB. This game doesn't contain anything scarier than cartoon characters parachuting to safety when a crash occurs; I don't see any problem with this game for children.

Deaf & Hard of Hearing: Nothing in this game requires sound cues to play. When replaying a track where the gamer crashes, the game offers combined audio and visual cues with a blaring siren and exclamation point, which both herald the approach of the previous crash spot. The visual cue is sufficient in this instance.