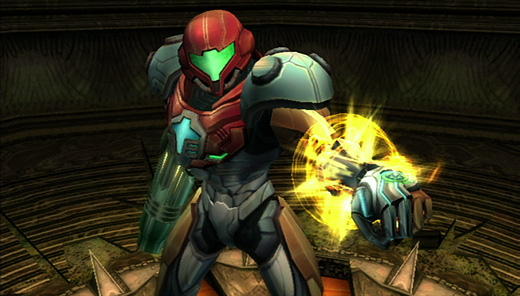 This morning I awoke to my Wii's disc tray pulsing with that seductive blue glow that implies internet activity is going on. I was curious as to what might be updating. Most recently that glow brought news of a Wii system update. (Incidentally, the new Wii store shopping experience is an improvement for Virtual Console perusal.)

I was assuming some kind of updates in the store, but I noticed a new message which turned out to be from Nintendo, letting me know that there were new Metroid Prime 3: Corruption previews available. Yay! Seeing as how that is the first Wii release that I'm excited about (and the reason I recently obtained my Wii), I immediately hit the store and downloaded.

I was hoping for a playable demo, frankly, but what showed up were two movies previewing the basic gameplay, with placeholders promising two more movies on the 13th. There was also a picture of Samus that could be revealed by "scrubbing" with the Wiimote. Nintendo has made August "Metroid Month" so I wonder if there will be goodies beyond these four movies? After checking the internet, I now see that Super Metroid is expected this month on the VC; and I know it was just released for the UK. That's a good lead-in, although I personally question releasing that one week before the full-blown Corruption. Two weeks (or a month) would have given more playtime; I might even have bought it, but not knowing that I'll be playing the full-blown Wii entry after a week!

The footage wasn't overly impressive to me, mainly because the compression gave it a grainy quality. However, it did put me in mind of the crisp video goodness of the first two Metroid Prime games, and that was exciting. There were lots of space pirates, and Samus used a new weapon to break the shield barrier that some of them were sporting. (Those darn pirates, what will they think of next.) I've avoided most information about Corruption, but after viewing this demo, I believe the new weapon will be utilized by the hand holding the analog stick, probably with a swipe gesture. I was immediately imagining what it would be like to play by looking around and/or aiming with the Wiimote, while gesturing with the stick in my other hand.

In that sense the demo was successful, because I was envisioning the new gameplay, and if I wasn't already expecting to get Corruption at release, this would be a good reminder. I hope we get more of these online-distributed previews in the future, it's a convenient way to see what's coming down the virtual pike.

From what I have seen it is more or less of the same,however there are diffrances I hope its levels are not small and complex like MP2’s (they drove me crazy),however what I do know its MP on the WII with WII controls thats enough to make me go out and spend 300,now if they release a WII version of MP1-2 for 50-80$ I will be happy to get them.

Its a shame Zelda TWP is not godly maybe the next one will be better..

For now tho I await Bioshock ^^

After downloading the clips, I think I’m actually less excited for the game than I was before. (Not like I was super hyped up for it anyway, but you know.) It looks like more of the same, and whether it was the video quality or not, the graphics look really behind the times. It’s funny because I was actually playing Elebits this morning and I was thinking to myself how annoying it was to actually have to twist my wrist to open a door and so on, so the thought of having to do a similar sort of physical motion… Read more »