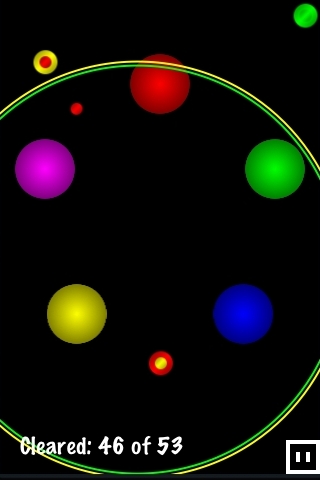 HIGH Ah, the soothing sound of windchimes… how relaxing!

WTF It's not a flashy game, but I think App Store reviewers are awfully harsh on such an inexpensive purchase. (Admittedly a common problem in the App Store.)

It's not a flashy game, but I think App Store reviewers are awfully harsh on such an inexpensive purchase. (Admittedly a common problem in the App Store.)

Chimes is an iPhone title from SRRN Games, and it meets the prototypical ideal for the mobile platform: gameplay in bite-sized chunks that can easily be downed on the go. The developer calls it a "musical experience" that builds on "sight, touch and sound." The question is: does it deliver a taste that will bring me back for more?

At its core Chimes can be described as a musical-themed puzzler, where soothing tunes and the namesake chimes form the background of the game. To this end it offers choice of three musical themes which provide an ambient or lounge-groovin' backdrop of sound. The only action required from the player is to touch one of five colored spheres and create a "wave," a windchime that appears as a growing circle of color which grows across the board until it vanishes. The colored waves are used to clear smaller obstacles that move across the board in the form of colored circles.

So far this doesn't sound very exciting, but the gameplay steps things up by having many of these circles be of concentric colors, and to clear them requires not only choosing the matching colors, but pairing the waves. Choosing the right color combination is essential to clearing the board with a minimal amount of chimes. If this sounds confusing, know that it's easier to understand when played; I was able to figure out the basic premise just by starting the game.

However, Chimes does include a basic tutorial, and this is an area I found lacking. The tutorial is a slideshow, and each type of action is shown with two or three slides. The problem I had was that I really didn't understand how the "compound" colors worked, even after the tutorial. For example, a red ring passing over a green dot causes the dot to develop a second ring of blue. If it were based on compound primary colors, red and green would make yellow. This aspect of the design seemed arbitrary to me.

This "compounding" affects gameplay because the rings can be used on compound obstacles, but I never really got a feel for whether my waves would clear obstacles or cause "regeneration," which expands an obstacle rather than clearing it. This wasn't as big a deal in the relaxing Forever mode, but in the levels where there is par, it was frustrating and I would just give up trying to match the par for tougher levels.

At the time of writing Chimes is a free download from the App Store with a sample of ten levels and the basic Forever mode; a $.99 in-game purchase adds new puzzles, enhances Forever mode and adds Stage Mode. Although the price is right for this new take on the puzzle genre, I tend not to rely on using my iPhone with audible content or headphones, so while this game bills itself as a musical experience, I didn't find that as big a selling point. I'm also used to playing more involved games with higher levels of visual and audio polish. Chimes is solid, but it isn't in the same category as Lumines (although I prefer it to Meteos DS).

Of course it's not fair to judge an independent game in the App Store as if it were produced on a console budget. Considering Chimes in its own right, it's a solid game that is good at what it does. I don't think it has the longevity factor, but it's a challenging (or relaxing, dependent upon mode) effort that will appeal to both casual and puzzle gamers.Rating: 7.0 out of 10.

Disclosures: This game was obtained via publisher and reviewed on the iPhone. Approximately 2 hours of play were devoted to the single-player mode, and the game was not completed.

Parents: There's nothing to be afraid of here. The game is all about colored circles and rings… it might be a little abstract for young ones, but there's nothing questionable or offensive at all.

Deaf & Hard of Hearing: You should be aware (of course) that the game is designed as a multi-sensory experience dependent on sound, so those who have issues with hearing will be missing much of the presentation. However, gameplay is adequately represented through visuals and is able to be enjoyed by all.