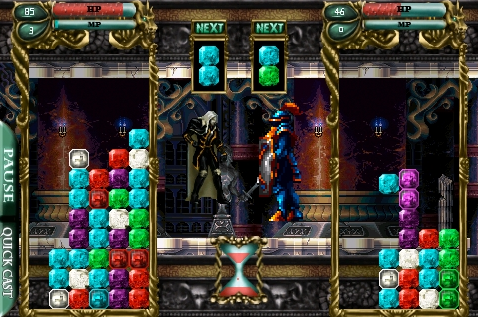 No, seriously, it does.

I have been waiting for this game for my iPhone. People talk about wanting a port of a proper Castlevania game, but on the iPhone? Don't they realize that those virtual d-pads don't work well for precision gaming? At any rate, I was waiting for Puzzle: Encore to release, but it was delayed, and I got busy with real life and didn't notice until two weeks after it actually hit the App Store.

As soon as I realized it was out, I bought it. Which was a small story in itself, being at work without an accessible Wi-Fi connection for my phone. (Apps greater than 10M in size cannot be downloaded via 3G and require Wi-Fi.) But I nabbed it and immediately booted it up. Right away it dove in with a pretty user interface, a well-designed tutorial-as-you-go, and that exquisite music from Symphony of the Night. Yes, they crammed the music in there, somehow.

People on the internet have been calling this game a Puzzle Fighter clone without even trying it. I've played various iterations of Puzzle Fighter, and I can tell you that for me, this game is much more enjoyable. (The developer says it's roots are in another Konami puzzler called Puzzle Dama.) Puzzle Fighter has all those special gem patterns to do special attacks which I could never figure out, and it was based around sequential rounds of fights, not unlike Street Fighter. Puzzle: Encore, in contrast, is closer to an RPG. It has statistics to assign points to, leveling up, healing items, armor, weapons, accessories and so on. The player must maneuver hero Alucard around Dracula's castle, following a map that many gamers will recognize. There is no platforming action; Alucard moves and if he encounters an enemy in a room, that means a puzzle battle occurs.

This isn't a straight-up match three either. There is a timer that alternates who is going to take more damage for a round, spells that can be cast, items to employ and—a nice twist, I thought—the gems can fill to the ceiling but it doesn't lose the battle for either side. In that case some rows clear out and extra damage is given. Damage has its own rules as well. Basically, this means more strategy is involved.

Some of you might be wondering about Puzzle Quest. I have to be honest, I didn't like Puzzle Quest. I really wanted to, as it's a game idea I'd long thought would be cool: an RPG where the battles are puzzles. I struggled with Puzzle Quest and finally gave up. I thought it's AI cheated and got stuff too easily. Maybe I just sucked, but I had seen other people on the web imply the same thing, especially when the sequel came out and was praised for not giving the AI a free ride of endless matching gems.

One particular kudos for Puzzle: Encore: there is a sensitivity for the touch interaction, and some additional touch options allow the player to disable things like swipe-to-drop-block. The sensitivity option is great, and actually helped my game.

The music that plays during each battle is my least favorite in Symphony of the Night, I think it's called "Young Nobleman of Sadness." (The heavy rock music.) The developers even have that covered, there's an option to play my own music if I want it. Possibly just for battles. I haven't made use of that, as I prefer to hear a game as it was created. But it's tempting!

Obviously I like this game, and I've only been playing it for a couple of days. It's possible that I'll change my mind with more playtime, but I've been gaming long enough to know pretty quickly if a game is a dud. I really do think that Puzzle: Encore has legs.

So far, I think it's one of the best Castlevania games since Aria of Sorrow. (My personal favorite from the recent years.)