Bionic Commando Rearmed was released on XBox Live and Playstation Network this week as a downloadable game, and I think this game is "Rad." Er…. awesome! 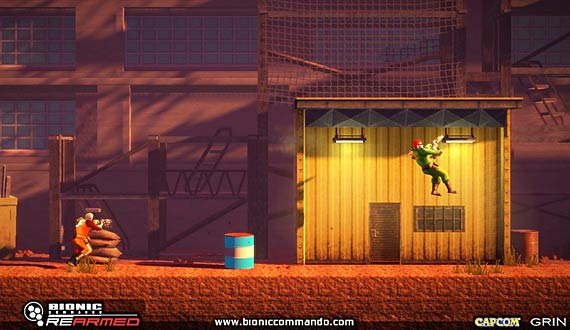 As you can see from the screenshot, this is definitely an updated version of that 8-bit NES classic. And I think it looks good. The arm-swingin' action is intact, with some new features added. There is a definite sense of nostalgia here but I think it's a fun platforming game, and should stand on its own even for someone who hasn't played the original.

The game opens with some background introductory dialog, using communicator-style headshots, which appear throughout the game. The overall mission is to rescue Super Joe from the clutches of the Imperial army. After the basic intro, the games jumps right into that numeric map screen that I remember from the original. Although it has some cool new effects to bring it into a more modern presentation, while not straying far from the version of yore. From there the action is familiar to Bionic Commando vets. Choose a territory, fly the chopper there, and land. A spunky gal named Haley is here to play wingman and provide advice throughout the map. It's still possible to intercept enemy trucks, which still produces the top-down Contra-style action sequence.

Stages are lovingly updated versions that pay tribute to what I recall of the originals. There are plenty of little graphical flourishes to enhance the experience, from explosions to the way the bionic arm shatters the large lights. Dialog with soldiers in neutral zones often pokes self-referential fun at the main character and indeed the game. (Speaking of neutral zones, shooting a gun there no longer causes waves of enemies to descend.) The 1-up item is still an 8-bit "doll," which is always good for a chuckle. As enemies and various items are encountered, they are added into a database, available for review at pleasure. The soundtrack is a distorted, raw remix of the original tunes. I previewed these a few months ago and they reminded me of songs at the Overclocked Remix website (fan-made videogame tune reworkings); but in-game, they sound and fit surprisingly well.

Some new additions include being able to grab, hold and throw barrels; and grab some blocks that are blocking the way forward. (At least I don't remember those in the classic!) To eavesdrop safely on enemy communications now requires hacking into their system, which involves solving a little 3D puzzle, which so far hasn't been difficult. The reward is bits of information and often clues to the boss. There are a variety of weapons earned during the game, and all of them are available at any time, with the shoulder buttons allowing the player to cycle through them.

Speaking of which, the boss battles are different than I recall, and they are much easier to get through. I played a bit of Bionic Commando on the GBA last year as part of Capcom's Mini-Mix Collection, and that was quite challenging. I didn't even get past the first boss in the time I played. These bosses are much more manageable and fun, particularly once you figure out their weak spot. As I write this it occurs to me that I think I started out with an Easy difficultly level, not wanting to experience the frustration that often accompanies playing an 8-bit (or even 16-bit) classic. I'll have to try out Normal and see how that works. One of the nicest features of Rearmed is unlimited continues. A set number of lives will allow the gamer to continue playing from the last checkpoint when he dies; losing all lives kicks the player back to the map to try again, or perhaps pick an alternate level. This is much better than having to re-clear every level from the very beginning!

In summary, I am really enjoying this remake. Bionic Commando Rearmed is a fun, dive-in-and-play kind of game. The swinging arm mechanic made for a nice alternative to jumping in the past; and the shift of strategy required still works today. The developers have paid tribute to the original game while adding plenty of worth while enhancements. Besides the above mentioned items, there are multiplayer modes and virtual reality-style challenge stages, which are definitely tricky to get through. I think this game was definitely worth the $9.99 it cost me on the PSN, and I highly recommend it.

The retro gameers suck. Bionic Commando is a shitty remake of a outdated old shitty NES games you retro games jerk off to. Yahtzee is the gaming messiah who will turn games into a art form.

BTW, though i started in singleplayer i quickly remembered that there’s a 2P co-op and restarted with the wife… 2P is every bit as awesome as the single. bigtime kudos to Grin for that.

I picked it up on PSN as well and I completely agree, it’s fantastic! Something else that stands out is the games humor. Some of the dialog in there made me laugh (when you run into the first boss), which is something I wasn’t expecting. A must download for any system, 360 or PS3.

Ditto to everything… i only played the first few stages (damn day job!) but i’m loving it so far. Thumbs up.