The Legend Of… Amaterasu 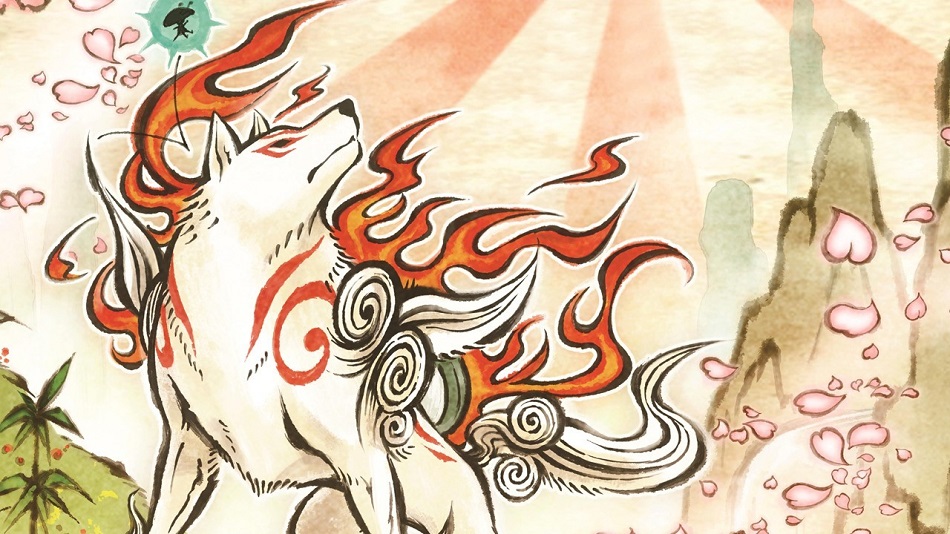 HIGH This version is best possible way to play an absolute classic.

LOW The implementation of the brush mechanics is still a little finicky.

WTF I wanna party with Issun.

I suppose if buying a game three separate times, beating it twice, then happily agreeing to review it again upon its fourth release makes me a fan of Okami, then I guess I am — there’s maybe a handful of games I’ve played in my life as charming or as aesthetically pleasing as Clover’s beautiful ode to Japan’s artistic heritage.

The game jumped onto the scene in 2006 with high critical praise and a resounding thud on the sales charts, immediately contributing to the unfortunate shuttering of the talent-laden studio, who had a knack for releasing wonderful games that sold about as well as month-old cabbage. Luckily, a rabid cult following was enough to get Okami a re-release on Wii a couple of years later, followed by another release on PS3, and now it has once again returned to grace modern devices.

This latest version only features two enhancements, the less notable being the optional return of the PS2 loading screen minigames that were later removed. They serve as a novel little distraction, but with loading less of a problem these days, they don’t add a lot.

No, the real news is the ability to play in full 4K resolution with HDR capabilities on the PS4 Pro and Xbox One X. However, due to the art style of Okami, the resolution bump isn’t as impressive as one may think since the water-colored, intentionally blurry design doesn’t benefit from added fidelity. The real stunner here is the HDR, as the colorful world is absolutely beaming with life. Heavenly canine (and protagonist) Amaterasu bringing back the beauty of a once-cursed area remains one of the most visually stunning things in the history of the medium, and it looks better than ever now. While not as crisp as other 4K games, Okami will nonetheless serve as an excellent showpiece for anyone with a fancy new console and TV — impressive, considering this title is over eleven years old at this point. 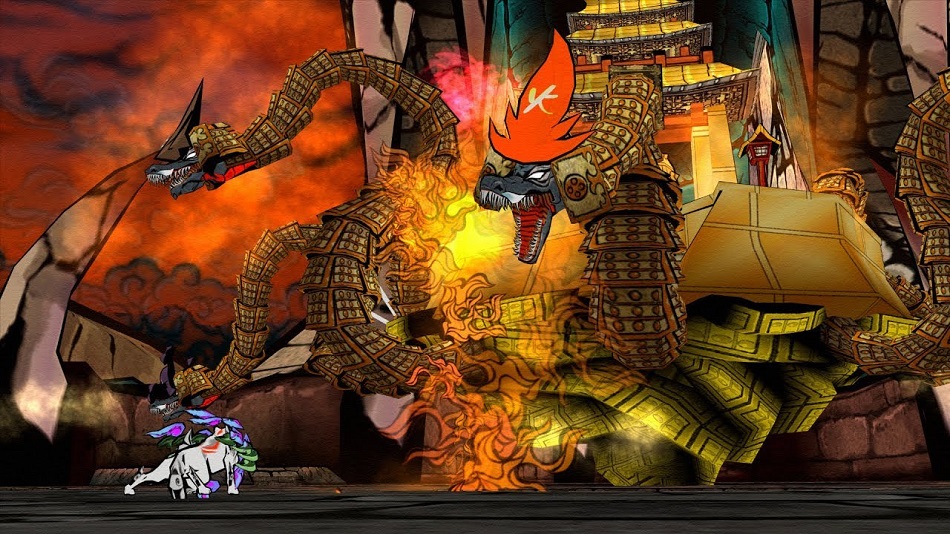 For those who haven’t played it yet, Okami is essentially a Zelda game where the player is a dog that happens to be better than that time Link was a dog in an actual Zelda game. There are towns to interact with, puzzles to solve, dungeons that culminate in boss fights, power-ups to acquire, and a glowing fairy that guides the player and serves as a mouthpiece for our mute protagonist. If this sounds familiar, that’s because it is.

Okami‘s big gameplay hook is its ‘painting’ mechanic that allows Amaterasu to superimpose a canvas on the screen and paint in missing aspects, such as drawing a bridge over a river or restoring the flora on a tree. This translates to puzzles and combat as well — Amaterasu can draw a bomb to open up new areas or blow up bad guys, as just one example. It’s a cool mechanic, but the drawing has never been accurate enough, as I feel around 30% of my drawing attempts end with nothing happening. Okami has always had this problem, and it’s a shame it hasn’t been improved.

Another thing that could’ve been improved in this version is the combat. It’s serviceable, but a tad basic and doesn’t require much strategy outside of the inventive boss fights. Hit a guy three times, slash him with the brush, wash, rinse, and repeat for 50 hours. However, neither the inaccurate painting nor the combat are are deal-breakers in this expertly-crafted adventure full of interesting puzzles to solve and excellent dungeons to maneuver through. It may be a Zelda clone, but it’s probably the best Zelda clone ever.

All in all, this latest (perhaps final?) iteration of Okami is exactly what it should be. It’s the best version of a fantastic game that has managed to age gracefully — something most 3D games struggle to achieve. While the gameplay may be solid-yet-unremarkable, it’s still a pleasure to experience the marvelous art direction, music, and a fantastic story featuring a litany of memorable characters and interesting locations. While I’m not sure the added 4K and HDR capabilities will entice someone who already owns the PS3 version, anyone who hasn’t experienced Okami since the days of 4:3 televisions or those who haven’t played it should be prepared for a real treat, especially at the incredibly fair price of $19.99. Nearly a dozen years after it’s initial release, Okami remains a beautifully-realized vision that will still be enticing to players for a long time to come. Rating: 9 out of 10

Disclosures: This game is developed by Clover and published by Capcom. It is new to the PS4, PC and Xbox One, but was previously released on the PS2, Wii, and PS3. This copy of the game was obtained via publisher and reviewed on an Xbox One X using a 4K HDR certified television. Approximately 20 hours of play were devoted to the game, finishing about 50% of the story. This 40-50 hour game was completed previously by the reviewer upon its initial release, and the time spent with the new version was to check for technical competence. There are no multiplayer modes.

Parents: According to the ESRB, this game is rated T for Blood and Gore, Crude Humor, Fantasy Violence, Suggestive Themes, and Use of Alcohol and Tobacco. While that seems like a lot, the game is rather tame, but parents who may be sensitive to some sexually perverse humor may want to avoid giving this to younger audiences.

Deaf & Hard of Hearing Gamers: The story is told entirely through text and there are no necessary audio cues. It’s fully accessible.

Brings a tear to the eye knowing that this title has been ported to current consoles and PC so a wider audience can enjoy its absolutely wonderful art direction, music, characters, the works. I still remember asking my parents to get me the game as a Christmas present because I loved Clover Studios and wanted to show my support. Shame they went under, but this and God Hand (a game that should also get a port at some point) were a hell of a sendoff. Least Platinum Games has mostly been quality since then.