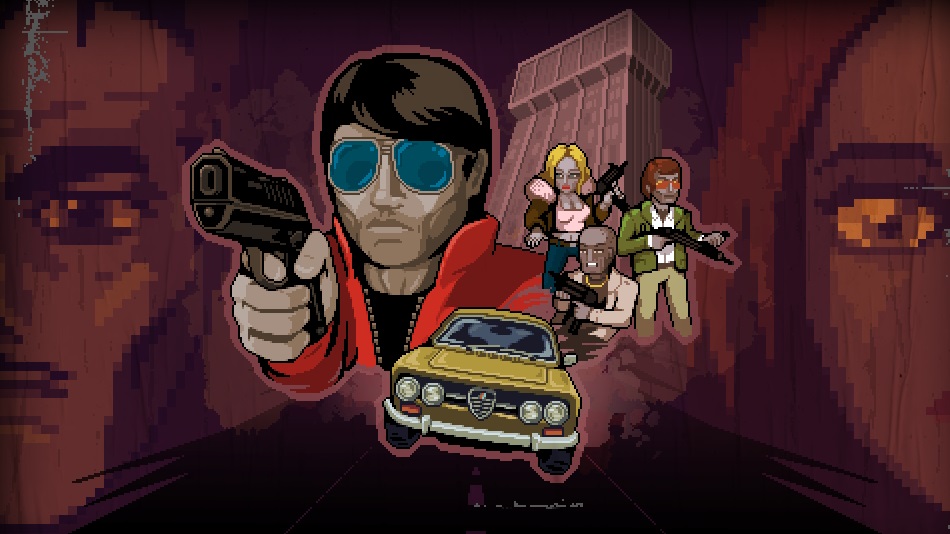 HIGH Constantly being reminded of Hotline Miami, and those memories of happier times.

LOW Fighting the abysmal controls at every moment of play.

Nostalgia only works if one is nostalgic for the same thing the developer is. For the folks at Italo games, they hope they’ll find an audience that appreciates 70’s era Italian crime cinema, which was extremely influential for modern filmmakers like Robert Rodriguez and Quentin Tarantino. While I like their movies, I have zero knowledge or nostalgia for the films they are inspired by, leaving me in a confused position when playing Milanoir. I’m certainly down for a good gang warfare story and I had a whole lot of feelings after playing this game, but very few of them could be considered ‘good’.

Given the material, it probably won’t be surprising to hear that Milanoir is not a game for kids. There are buckets of blood, tons of deaths, swearing, and other instances of potentially-offensive content, but the thing about ‘controversial’ subject matter in any media is that when someone tackles the subject, they better be damn good at it.

A good recent example of this is Cuphead — a loving homage to a golden era of cartoons that, upon further review, had high amounts of horribly racist, xenophobic, and abhorrent content that no six-year-old should be consuming. The developers (smartly) avoided all of that and focused on the cool art style and music of the period, and while they could be criticized for letting the source material off the hook, they made something that honors the original artistry while making a viable product in 2018.

Milanoir does none of that.

While I’m no expert on the films that this work draws from, it is not okay in 2018 to name a character ‘Africana’ because she likes black girls. Was there ever a scene in one of these movies where a bunch of prostitutes ran at the hero screaming while wielding knives? I’m sure it happened, but I don’t want to play through it. Did we really have to stab the Chinese pimp with chopsticks while he gorges on white rice? 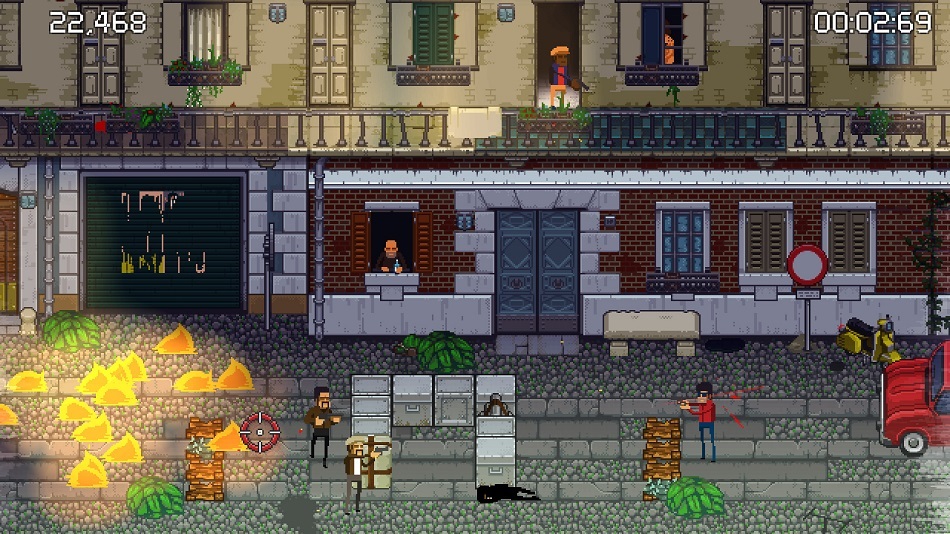 These scenes could easily be put into, say, the next Grand Theft Auto, but the people making those games wouldn’t go for such cheap gotchas without attempting to make some sort of point. If someone wants to tell me I don’t ‘get’ their sense of humor or calls me a snowflake, that’s fine. However, when themes like this are used so poorly and without any sort of consideration for whom they might be offending, than that’s when art ceases to be art and is reduced to being gross content.

By the way, those are three examples from the first level, and it only gets worse from there. There’s a scene in a prison (take a guess what happens) that’s only for shock value or sick laughs, and after seeing that, I officially put Milanoir permanently in the deplorable basket, never to return.

While the story and tone issues are apparent, they’d be easier to swallow if the act of playing Milanoir was more enjoyable than removing a hangnail. It’s an isometric 2D shooter that plays like a slowed-down version of Hotline Miami, but without any of the breakneck speed, precise controls, or visceral impact. Guns have zero oomph, both in audio and in practice, and the lock-on system makes shooting even worse.

Essentially, Milanoir only locks on once a shot has landed on an enemy, which consistently made me waste numerous shots trying to get a bead on one. In later levels, there’s simply too much action for the floaty cursor and slow character movement to keep up with, leading to extreme frustration. There is a cover mechanic that is surprisingly well-implemented, but I never felt the cover provided, well, cover, as I was still getting bombarded with gunfire that slowly whittled away at my slowly regenerating health until I was dead.

The biggest offender are the boss battles — they feature enemies with astounding levels of health, which leads these encounters to be trial-and-error affairs more focused on the error, as failure to do the same gameplay loop ten or twelve times without dying is astoundingly annoying.

The shame of Milanoir is that there are redeeming qualities, like a spot-on soundtrack that nails the feel they’re going for, and while I’m not exactly impressed with pixel art anymore, there’s some really excellent detail in the environments. I see what the developers were going for, I just wish the experience was better, especially since Italy doesn’t seem to be a hotbed of game creation. It would be cool if the country had a success story in the industry, but Milanoir is not it.

While I found the subject matter and the characters to be off-putting and offensive, the real killer here is the sloppy, cumbersome gameplay that, even if one thinks the poor attempts at humor come off as amusing, will render the drive to play it obsolete. The five hours I spent playing Milanoir was a miserable, groan inducing slog that I don’t wish upon anybody. It may be an homage to films of the past, but what it is for me was truly, truly awful. Rating: 2 out of 10

Disclosures: This game is developed by Italo Games and published by Good Shepard. The game is available on PC, PS4, and XBO. This copy of the game was obtained via publisher and reviewed on the PS4 with a HDR certified 4KTV. Approximately 5 hours were spent in the campaign, and the game was completed. There are no multiplayer modes.

Parents: According to the ESRB, this game is rated M for Blood, Violence, Strong Language, Nudity, and Suggestive Themes. Given the subject matter, imagery, and the lack of tact on the developers when it comes to how they handle controversial subjects, under no circumstances would I advise a concerned parent to let their child play Milanoir. And don’t worry, they won’t want to.

Deaf & Hard of Hearing Gamers: The game’s story is told entirely through text and is very readable, but there are no sizing or color options for it. There are also no noticeable audio cues 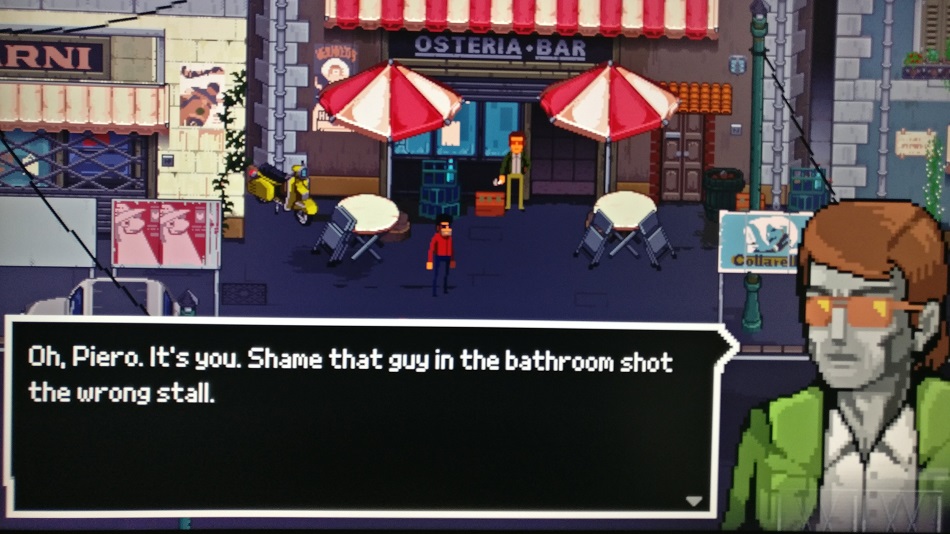 Remappable Controls: This game’s controls are not remappable and there is no control diagram. The character is controlled with the left stick while aiming is done with the right stick. R2 fires the guns, and X is used for taking cover. 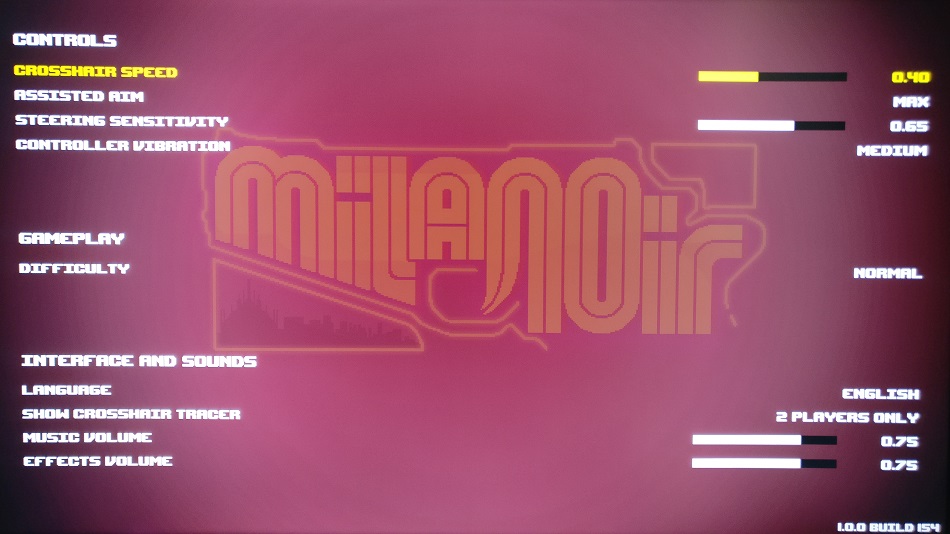 “These scenes could easily be put into, say, the next Grand Theft Auto, but the people making those games wouldn’t go for such cheap gotchas without attempting to make some sort of point.”

Hmm, not sure about about that to be honest. I was hugely disappointed with GTA V for that very reason in fact.

Was coming here to say exactly the same thing GTA V is really bad at this sort of stuff.

V has problems. I probably could have been more specific and said GTA IV. IV was much better about it. But V is still light-years ahead of this game, believe me.

Yeah, Rockstar had much better intentions with GTA IV. I miss the Rockstar of that era.

Oh geez – I am finding that hard to fathom – you are almost convincing me try this game out to witness the horror!

Obviously the pinacle of this is Eat Lead: The Return of Matt Hazard… I kid, I am actually trying to think of a game that does play with tropes in an interesting way? Serial Cleaner makes a fair stab at it I guess.