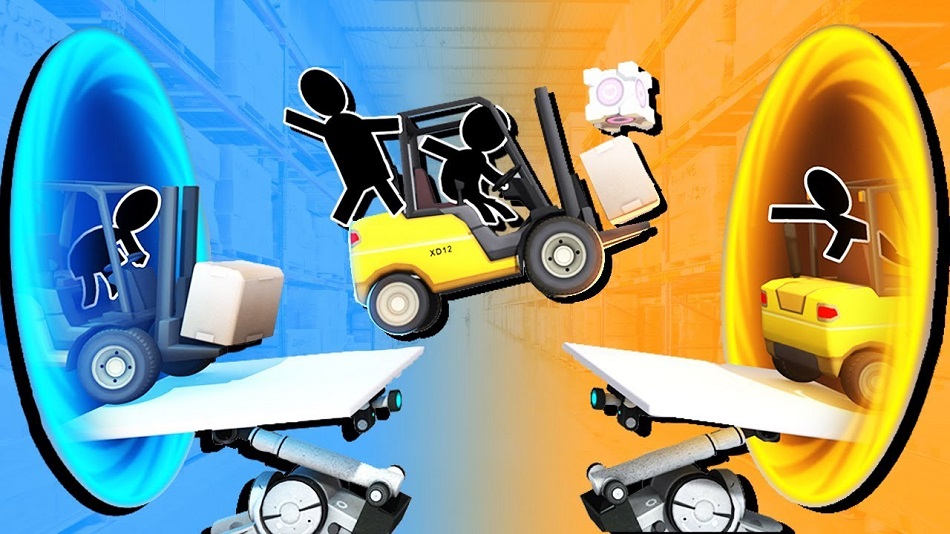 HIGH An excellent introduction to an entire genre.

WTF I still can’t believe this is a thing.

Why do I bring it up? Because of the flak thrown Valve’s due to Gabe Newell’s affinity for building bridges, or however this truly strange product came to be. I don’t know why Half Life 3 isn’t a thing, but I’m quite certain that handing over some Portal assets to ClockStone didn’t impede its production.

Leave Valve alone, folks, and stop sending them hate mail. Instead, let’s celebrate this neat thing that came out of nowhere.

Bridge Constructor series has carved out a nice little niche in the PC landscape for itself considering its humble beginnings as software many people vaguely remember fiddling around with in high school computer engineering, and the best part of Bridge Constructor Portal is its ability to bring in people who know Valve’s licensed IP, but have never actually played a game like this.

Thankfully, Bridge Constructor Portal does a great job of introducing the various mechanics, structures, and materials one will need through the first few levels. It’s a pretty simple format — there are trucks and they gotta get to the other side of a chasm, so build some bridges and make it happen. 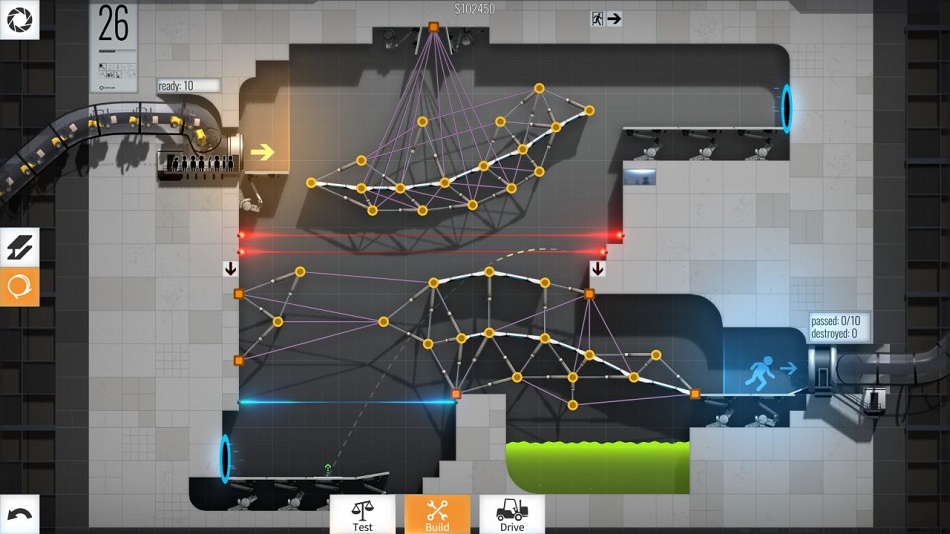 It turns out that it’s definitely not as daunting or intimidating as other niche PC genres can be, and no architecture degree is necessary for success. After the first few levels I felt like I was becoming pretty good at predicting how my bridge was going to fare, but when it goes wrong, it’s just as enjoyable to watch one’s failure crumble into a pile.

The Portal influence is both the greatest strength and the greatest weakness here because the internet has a special way of completely ruining things. Because of this, it may be easy to forget after a decade of awful cake jokes that the original Portal was an incredibly subversive game when it came out, and the sequel just might have the funniest script ever put to code.

Bridge Constructor Portal has all the things a meme expert would demand a Portal-related product should have, but a lot of the jokes fall flat and there’s none of the subtlety Erik Wolpaw and Chet Faliszek mastered in the originals. While AI nemesis GLaDOS serves as guide through the levels (and she still does a good job belittling the player) it’s never quite as biting or as demoralizing. That said, while it comes off as a little fanfictiony, there’s still plenty here to make a fan of Portal crack a smile here and there.

However, despite a slightly soft script, the world of Portal is a surprisingly fantastic setting to build some bridges in.

Not only has the aesthetic of Portal has been nailed perfectly, the team at ClockStone has done a great job of making the player feel like they’re in an extension of Aperture Laboratories thanks to elements like companion cubes, turrets, and of course, the titular portals that differentiate this title from other entries in the genre.

I’ve never played a title like this before (and while I’m not chomping at the bit to play another one) Bridge Constructor Portal is a great way to introduce a newcomer like me to this surprisingly popular genre. It uses the borrowed IP well, and while not every joke hits, the fact that the dev was able to shoehorn that Portal flavor into a completely new genre is commendable. This is probably isn’t the product that Valve fans were wishing for, but let’s stop berating them and enjoy what we’ve received — turning up one’s nose at a surprise gift like this would be silly. Rating: 7.5 out of 10

Disclosures: This game is developed by ClockStone and published by HeadUp Games. This copy of the game was obtained via publisher and reviewed on PC using a Core i7 Ultrabook PC with a MX940 GPU and 8GB of RAM, which allowed me to run the game at a 1080p resolution on medium settings with little trouble. As well as PC, the game is available on MACOS, Linux, XBO, PS4, Switch, iOS and Android. Approximately 6 hours of play were spent on the singleplayer levels, of which 44 out of 60 were completed.

Parents: According to the ESRB, this game is rated E for Mild Fantasy Violence. While some of the jokes may fly over a child’s head, there’s zero objectionable content to be found here and this would make a fine game to give a kid, especially if a parent would like them to be doing something somewhat constructive during their gaming time.

Deaf & Hard of Hearing Gamers: All of the dialogue and tutorials are available via text and there are no necessary audio cues. There shouldn’t be any issues playing this game. It’s fully accessible.