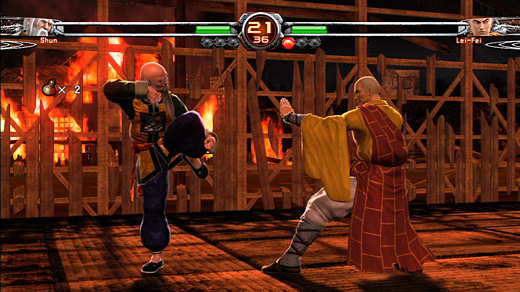 HIGH Nailing a combo with pitch-perfect timing against a similarly-skilled opponent to win a heated match.

LOW Most of the new music is… not good, and several design decisions are a step back.

WTF Coming across a customised Akira online decked out with a leather cap, a handlebar moustache and a pair of stylish red underpants. Then losing.

Three buttons—One punch, one kick, and one to block incoming strikes. A mere three buttons comprise what is commonly viewed as the deepest fighting system on the planet.

Despite its status one of the most revered fighting titles, it's never managed to attain mass market appeal in the West. Virtua Fighter 5: Final Showdown

is unlikely to change that. There are no rage modes, no super bars, no lasers spewing out of human eyeballs before cutting their opponents clean in half.

There is, to put it plainly, only the elegance of two fighters squaring off in a small ring, battering each other senseless through the mastery of their chosen martial arts—ones largely based in reality, with only the occasional video game flourish such as juggle combos or Kage's Ten Foot Toss kicking reality itself in the teeth.

So what's different about 2012's Final Showdown compared to plain old Virtua Fighter 5 from 2006? Quite a few things, actually.

Beyond the obvious inclusion of two new characters and frame data tweaks, several core components of the gameplay have been changed and many key moves are either missing, replaced or changed drastically.

The basic throw system has also changed—arguably for the worse—in that it no longer accepts multiple throw escape inputs. Now it's a matter of predicting which of three throw directions the opponent intends to use and matching that input as it connects. The old system was based on reactions and lightning fast inputs. This new system operates on guesswork, or "predicting your opponent" as Sega calls it. 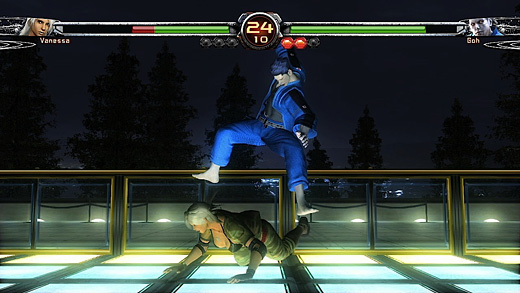 It's not all doom and gloom, though. The game itself still plays superbly. Many characters have all new attack options available to them, and there's a selection of fighters fit to satisfy almost any type of gamer. From the destructive power of Akira's Hakkyokuken to the tricky full contact Vale Tudo MMA that Vanessa employs, at least one of these fighters is bound to be right up any player's alley.

Getting back to the depth, there's a lot to learn in this game, and it shows—it's not uncommon to spend hours learning a character and still freeze up under pressure, wondering which command in whatever situation does that bloody well forgotten thing that would salvage the match.

As deep as it is though, it's far from impenetrable. Once the combos and spacing begin to come together, there are few fighting games that come anywhere near the level of satisfaction that Final Showdown offers. It's not a martial arts simulator, as some people preach—not unless Karate secretly evolved into a style which involves punting someone into the air and smacking them five times before they hit the ground these days—no, it's very much a game, and an exceptionally enjoyable one at that.

Even with all this praise towards the fighting system it's tough for an average player like myself to tell if the game is completely balanced, especially in comparison to its immediate predecessor. For instance, since Taka weighs about fifty thousand tons and is comprised of pure blubber, most juggles are ineffective against him. Certain moves like Jacky's near-instantaneous somersault kick as a counterhit can tear off more health than a reasonably skilled combo would—but it certainly seems fairer than many competing fighters would ever attempt.

There's also an extremely in-depth customization mode which allows characters to undergo significant visual changes. For instance, anyone not keen on Vanessa's initial character design—that is to say, people who should be hit by a runaway truck and smeared violently over the length of three miles of tarmac—to pop into the customization terminal and tinker with her appearance to their heart's content. It's not a part of the standard package, however—to obtain the entire catalogue of items would cost another $30 on top of the $15 entry fee. 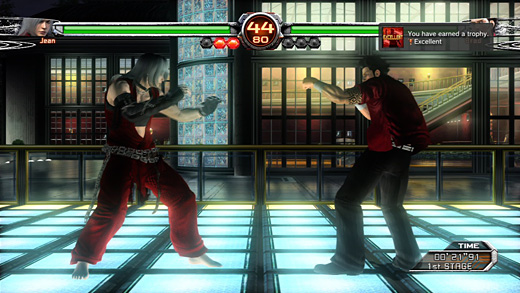 (It's also worth noting that there is currently no compatibility pack for viewing other people's character creations online. If someone purchases, say, Akira's customization pack and downloads the 1.93 Gigabyte file containing every single character's items, they'll still only be able to view items related to Akira. Every other item will remain locked away, even online against someone else who's bought the DLC and spruced up their character.)

There are some minor issues worth mentioning. The front end interface is dull, coming across as functional at best with several omissions that make playing the game more awkward than it needs to be. For example, after creating a lobby to play online against friends there's a hard-locked thirty second countdown between matches which can't be skipped even with only two players present. Why? Buggered if I know.

There's not much to the package for lone brawlers either. The quest mode is unfortunately—if understandably—missing from this release. There are score attack and license modes, but nothing of any real substance outside the usual offerings.

Also, it's entirely dependent on how many new players pick Virtua Fighter up as to how enjoyable the online scene will be for newcomers. A "small but dedicated group of players" sounds all twee and cozy and welcoming and stuff until that same group starts mercilessly smashing newcomers into little bloody bits within nanoseconds of being introduced to one another, pausing only to wipe off any bits of flesh that got stuck to their feet.

That's the thing though—this is a game that caters to a more ambitious player base, and while the above may sound scary, it's a hell of a lot better than having a pro get mashed to hell by someone who's been playing for ten minutes. Because of this, the near-flawless netcode is both the icing on the cake and the most important ingredient the game could ever have.

What we're looking at here is simply one of the deepest fighters ever made, not to mention that it's also one of the most personally rewarding (for me, anyway) fighters ever to grace a home console. Added to this, it costs a mere $15 straight out the gate. Sega have clearly gone bats**t mental and are practically giving it away for this price. It may arguably be a step back for the franchise with some of the tweaks they've made in certain spots, but in terms of overall quality it's still at the very top of the fighting game pile.

probably won't change the franchise's status in the West. It deserves to, though. It truly, genuinely deserves to. Rating: 9.0 out of 10.


Disclosures: This game was obtained via digital download and reviewed on the Xbox 360. Approximately 45 hours of play have been spent playing to date, mainly in multiplayer mode.

Parents: According to the ESRB this game contains suggestive themes, violence, and use of alcohol. Swimsuits, scanty clothing and rippling male chests qualify the first one, fighters engaging in bloodless pugilism the second and as for alcohol—well, that's due to Shun, the jolly drunkard whose fighting style is drunken Kung Fu. I wouldn't worry too much about this—he never spews himself into a coma, suffers terminal liver damage mid-match or starts screaming at kids.

Deaf & Hard of Hearing: While many attacks are bonded to battle cries or sound effects, the visual feedback often occurs at precisely the same time. This shouldn't be a problem.