Can a Video Game be a B-Movie, and Does this Present any Problems? 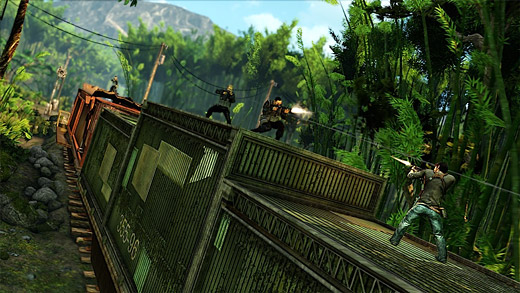 WTF There is absolutely no need to figure out what to do on your own, eventually the game will tell you.

There is no denying the existence of games with sophisticated storylines, scripts, characters, etc (Mass Effect, BioShock, the Metal Gear series, certain early RPGs for example); no denying the existence of games that truly define themselves as games, but these are few and far between in comparison to the amount of schlock (not meant in a degrading way) that is released. Uncharted 2: Among Thieves is schlock without doubt, but it may be the best schlock ever.

While certain stories necessarily present themselves with the intent of moving their audiences, making you think of questioning ideologies, or of repelling you to the point that knowledge is somehow gained in the process, Uncharted 2 is mindless. Take National Treasure, The Mummy, and Indiana Jones and the bare bones plot full of cheeky emotion involving Drake, Elena, and Sully from the first installment, along with a new cast of friends and enemies, and Uncharted 2 is summed up quite succinctly. Cliché-ridden, character development akin to that of a Russ Meyer (dir. of Beyond the Valley of the Dolls, he was the king of big breasted women films in the 70s) movie, it's as if John Woo and Looney Tunes had a baby and named it Drake. Cajoled into a treasure hunt involving the rumored Cintimanni stone, double and triple crossing abounds. The big bad guy Lazarevic is after immortality, and something creepy at the end of the trail awaits. Predictability has never been so embraced (exaggeration but…). Nevertheless, something about Uncharted 2 grabs hold and won't let go. It swims in its own inanity, self-reflexive beyond belief, and voice-acted so well I couldn't help but keep listening, and considering how good it looks, I couldn't stop watching either.

Alas, we have what sounds like a B-movie (which is not to say that B-movies are not capable of evoking thoughtful insights) on our hands. Lines of dialogue delivered with such irony it's clear the cast is winking at us and a plot so global, not to mention desperately dependent upon classic Hollywood gender roles, the player's laughing at its desire to impress (if only Bruce Campbell, star of the Evil Dead series, could travel the world in search of lost treasure, providing one-liners as only he can) is inevitable. Well Drake ain't no Bruce, but he's good nonetheless; just serious enough that it's not a turn-off (like an afternoon Syfy channel movie), just self-deprecating enough to make it clear the game is aware of its limits. This isn't high art (as if high art is perfect), but it is certainly better than the average popcorn fare.

It provides thrills incessantly, verging on numbingly, but encapsulated in such a tightly knit, short spurt of a game that there's no time to lose feeling. It is basically all adrenaline. This may get tiring for some, and I'll admit at times a slower paced game would've been welcome. Fortunately the cut-scenes provide breathing room, and once again, the visuals are so crisp that even in all the commotion, my eyes found a way to appreciate the various sites. The diegetic sound is also fantastic, scenes breathe with life the way Michael Bay (The Island, Armaggedon, etc.) wishes his plastic images could. But all is not worthy of praise. 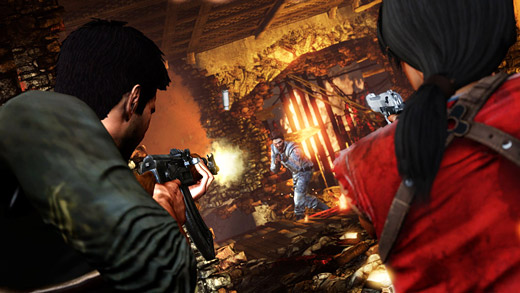 Regarding the game's mechanics, they aren't worth mentioning. If you've played a video game recently (this specifically being a third-person adventure/shooter), you will be fine. One problem I encountered more often that I would've liked is the cover system intruding when I just wanted to roll, or vice versa. Otherwise the game runs smoothly. Too smoothly. In fact so smoothly that the gamer almost isn't needed. When running into a situation I couldn't immediately get out of, and this only occurs because it's hard to decipher what can and cannot be climbed, a hint will pop up. Sometimes I like to explore an environment, attempt to climb everything just because. But this game seems not to favor the explorers (despite promoting the discovery of "hidden" treasures), and while the hints may be ignored, they show up with almost vehement regularity, as if the game just wants to finish, and doesn't really care whether or not the gamer does.

With Uncharted 2, I was not playing a game, I was watching a movie that happened to allow me to play very specific scenes. This could potentially draw comparison to the excellent Metal Gear games, but I would beg to differ. Metal Gear Solid pushes the envelope of game mechanics, difficulty level, freedom vs. predestination (both philosophically and gameplay-wise); Metal Gear Solid refers heavily to the medium that clearly influences it most directly, but firmly establishes itself as a video game (movies can break the fourth wall, but they can't make you unplug and re-plug the controller in order to continue progressing). Metal Gear Solid is not a 20 hour movie, it is a 20 hour video game that uses a multimedia approach to fulfill its goal. Uncharted 2 would succeed as a movie, albeit on the scale of a B-movie/Bruce Campbellish level. That may be a subjective statement, but considering nothing new is brought to the table save itself, it is undeniably clear where Uncharted's priorities lie.

Raw entertainment is not to be dismissed. Room should always be made for mindless fun, we can't always fill our plate with Kojima and BioWare (or the meticulously complex, unforgiving Demon's Souls, essentially the antithesis of Uncharted 2, another PS3 exclusive fittingly released a week before Uncharted 2 in the States). It is not even always a problem of sophistication, but of simple time management. Among Thieves is crystal clear with its intentions, it delivers in spades, is able to deliver in small dosages, and always with unmatched quality.

But the pressing problem/question remains: if video games only seek to mimic they're close relative (cinema), and succeed in doing so (both financially and critically), will there be room for games that wish to use the mold for more unique, differentiating purposes? I certainly hope so, because despite loving the swash-buckling ruckus of Pirates of the Carribean (or a David Jaffe game), I need to get my fill of Manhattan(s) (early Woody Allen, or a Team Ico game).

The problem is further complicated by the fact that in writing this review I used more references to films than video games! Video games have forged a path of their own, but with abundant territory left to discover, a game like Uncharted 2 (and many like it) feels a tad regressive. It is definitely not that Uncharted doesn't provide a good time, but if all Drake and Elena's adventure adds up to is the tried and true formulaic adventure of a classic Hollywood genre perfected years and years ago, I have to wonder why I even bother playing Uncharted. Those classic films are sitting on my shelf, might as well forget the game and watch those. Rating: 7.5 out of 10.

Disclosures: This game was obtained via retail store and reviewed on the PS3. Approximately 9 hours of play was devoted to single-player modes (completed 1 times) and 5 hours of play in multiplayer modes.

[quote=Demiath]While it’s certainly true that merely adding interactivity to, say, a generic action movie formula isn’t enough to make a video game good (there have been John McClane games, after all, and they weren’t any good), most UC2 reviews so far seem to agree that Uncharted 2‘s real (and perhaps only major) achievement lies in just how ambitiously and effectively the developers at Naughty Dog have managed to produce a title which plays like a solid action movie just as much as it feels like a good game.[/quote] I agree that UC2’s biggest achievement is that its takes the idea… Read more »

While it’s certainly true that merely adding interactivity to, say, a generic action movie formula isn’t enough to make a video game good (there have been John McClane games, after all, and they weren’t any good), most UC2 reviews so far seem to agree that Uncharted 2‘s real (and perhaps only major) achievement lies in just how ambitiously and effectively the developers at Naughty Dog have managed to produce a title which plays like a solid action movie just as much as it feels like a good game. I for one can just barely bring myself to pay attention to… Read more »

[quote=Demiath]For example, watching John McClane shoot bad guys can be fun, but being John McClane and shooting the bad guys yourself ought to be ten times more fun, and in my opinion the amazingly well-designed Uncharted 2 is one of the best examples of an action game which truly demonstrates this. Adding interactivity to well-established forms of entertainment might not be video gaming’s sole raison d’etre, but it sure as hell ranks as one of the Top 5 reasons not to rent an action movie if you got a great action game (like Among Thieves) to play instead…[/quote] I’m not… Read more »

While I have no problem whatsoever with Isaac Johnson’s assertion that Uncharted 2 for all intents and purposes is a playable Hollywood B-movie, I cannot even begin to comprehend the idea that there might be some kind of functional equivalence between watching a motion picture and actively taking part in the narrative yourself (however pre-determined said narrative may be). For example, watching John McClane shoot bad guys can be fun, but being John McClane and shooting the bad guys yourself ought to be ten times more fun, and in my opinion the amazingly well-designed Uncharted 2 is one of the… Read more »

i actually would like to know how Bioshock’s script presentation isn’t clever. it sure did to me. Babylon 5 was a not so bad series. at least, it told something coherently. i normally get lost on most games script since they become extremely convoluted.
turning off hints doesn’t raise the challenge, unless you’re the most casual gamer. it is clear that this is a game that wants to be finished, quickly. and why is Alex Raymond critique better than this one? Because of the score?

Just a couple of points: – Hint/Tips can be turned off via the menu (which is the same for Drake’s Fortune); I’m astounded you didn’t seem to realise this. In fact, I fully recommend turning them off so that exploration and the overall experience is better. – Using both Mass Effect and BioShock as examples of sophistication in regards to story is a good way to instantly ditch credibility. Mass Effect is about as cutting-edge as an episode of Babylon 5, while BioShock tries to appear clever, but actually isn’t at all. You redeem yourself by showing appreciation for Metal… Read more »

Although I did have a good time playing the game, I felt, as it ended, mind-numbingly dumb. And this ain’t the first time I’ve felt like that. I understand what the producers and directors of Unchartered 2 mean, when they say that you’ll want to keep playing because you want to know more about the story and its characters. But in all honesty, I don’t want to continue playing a video game just because it has a story and a group of characters I want/need to follow. To me, it feels like I’m not apart of the adventure when games… Read more »