No One is Mistaking this for the Real Thing 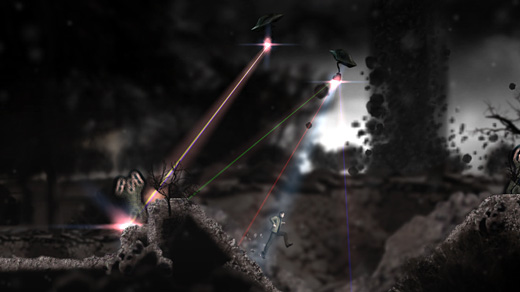 HIGH Racing through abandoned buildings as poisonous smoke filled the rooms behind me.

LOW Listening to the exact same speech from Patrick Stewart after retrying the same cheap spot for the twentieth time.

WTF Walking around as a corpse when the game failed to properly detect my death.

Out of this World. Flashback. The original Prince of Persia. Sometimes called cinematic platformers, this subgenre of gaming features a mix of puzzles and action, clunky (one might say realistic) controls, impressive animation, and set piece after set piece after set piece. Sure, these games tended to punish the player for even the slightest deviation from the script, but when everything was going right, they were the closest thing to an interactive movie that the gaming industry had back in the '80s and '90s.

The War of the Worlds

(loosely based on the classic novel of the same name) seeks to bring back that era of gaming. In some ways, it succeeds. There are some generally memorable moments here. Running in terror from giant alien machines, hiding from seeker drones, and hacking through alien tentacle plant-infested tunnels—when The War of the Worlds is good, it's really good. Unfortunately these moments of brilliance are the exception, not the rule.

I can't remember the last time I've seen such a buggy single player game released on Xbox Live Arcade. There were relatively harmless bugs like several times when I died and was able to walk around for several seconds afterwards, but not all of the bugs were equally benign. At one point, a checkpoint failed to trigger, so when I died I had to restart the level from the beginning. At another point, an item I needed to progress ended up inside of a floor. In one level, lightning on a ceiling killed me because I was crawling on the floor above it (but walking on that floor is safe). Apparently I got lucky—I've heard even worse stories from others playing the game, with particularly nasty bugs requiring them to start all over.

Even without the bugs, The War of the Worlds is a frustrating game. I'm all for difficulty (two of my favorite games in recent years are Dark Souls and Super Meat Boy) but there's a difference between difficulty and frustration that The War of the Worlds frequently crosses over. Some of the solutions to the game's puzzles are unintuitive to the point where I'm still not sure if I solved them correctly or if the designers just didn't anticipate what I ended up doing. Particularly towards the end of the game, some of the sections require a level of dexterity that the stiff controls aren't up to. With so many unfair sections, the fact that the developers decided it was a good idea to make not one, but two achievements that require the player to play through the entire game without a single death boggles my mind.

The War of the Worlds

is a difficult game to review because at times, it's a great game and at other times, it's an atrocious one. If you look back on classic titles like Flashback and Out of this World with nostalgia and have the patience to deal with bugs, filler, and frustration, there are some neat moments to be had here. If not, then stay far, far away. Rating: 6.0 out of 10.


Disclosures: This game was obtained via a review code provided by publisher and reviewed on the Xbox 360. Approximately 5 hours of play were devoted to the single-player mode, and the game was completed. There are no multiplayer modes.

Parents: According to the ESRB, this game contains fantasy violence. Humans are killed by the aliens during the course of the game, however there is no gore, just people getting zapped by laser beams or collapsing on the ground.

Deaf & Hard of Hearing Gamers: The War of the Worlds includes a subtitle option for all dialogue. None of the puzzles in the game are reliant on sound.