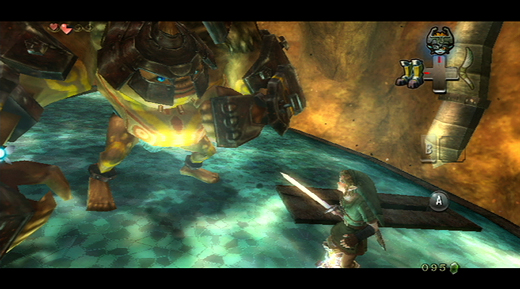 While thoroughly engaging and lore-filled, The Legend of Zelda: Twilight Princess is not the "tight and classy" Wii primer that Gene Park implies. Poor presentation and technical flaws mar this latest addition to the Zelda family. Forbearance and sentimentality from the entire gaming community has made gamers soft to the faults of Twilight Princess, and not many have paused to wonder what the game will do to the future of the Zelda series.

To be blunt, the game is broken. 30 hours into gameplay, I fell victim to the infamous "cannon room" bug whereby Link becomes stuck in a room with no way to leave—a classic example of a "show stopper" in game development. In disgust, I did not play Twilight Princess for an entire month before finally working up enough enthusiasm (born of my love for the series rather than for Twilight Princess) to start over and beat the game. Though fixed in the GameCube and European Wii releases, this serious bug counts as a strike against the overall experience of Twilight Princess; if Nintendo was more concerned with getting the game on the shelves than with the quality of the game, what am I as a consumer to expect for future Zelda games? PC games might benefit from downloadable fixes and patches, but I when I buy a console game, I trust that I am buying the whole product in its entirety as it was meant to be seen by the public. And despite the Wii's internet-savvy set-up that could lend itself to downloadable fixes, I don't want to pay for broken games.

The way in which the game was released contributed to its failings. Between being pushed back repeatedly, and "updated" to accommodate the Wii controls, the game lost some of its originality and "fresh" appeal. Twilight Princess released late as part of a marketing strategy to bolster the Wii. Normally, missing a ship date only costs the publisher a pretty penny; in Zelda's case this allowed Capcom's Okami to debut first using the wolf gameplay mechanic. There are only so many ways to be a wolf in an adventure game; after having been a god in Okami, the wolf gameplay in Twilight Princess feels stale and under-developed. Worse still, the wolf gameplay in Zelda starts to feel tacked-on when Link is required to be a wolf so he can tightrope walk through a single portion of dungeon. Art direction and plotline aside, this key features of Twilight Princess are anything but "tight."

Twilight Princess is not without its own merit. The plot, for one, is a main selling point. The story echoes the Ocarina of Time: a young boy from an isolated village goes to meet the legendary princess of Hyrule and gets caught up in an epic battle of good and evil. Things become more complicated when our hero shape-shifts into a wolf when entering the mysterious world of Twilight. The fairy Navi is replaced with the Twilight creature Midna, and a whole string of second-tier characters pad out the plot from start to finish, complete with heart-rending reunion scenes and the odd surprising plot twist.

Thanks to art direction and excellent game design, the land of Hyrule has never looked this good. The world is wide and diverse, leaving plenty of places to explore. There are many people to talk to, various interactive objects to mess with, rivers to fish in, hot springs to swim in, and a myriad of details that flesh out Link's adventure into something more personal and less scripted. The lavishly rich settings make for the widest version of Hyrule next to Wind Waker, with sweeping vistas, carved stone bridges, and imposing canyons that carve out landscape both rolling and rugged. Link can venture into towns and examine the wares sold by different vendors, talk to just about any NPC, and even pay to have his shoes shined in Castle Town's market square. Mini-games and side-quests abound, and the payoffs are worth (most of) the agony Link goes through to complete them.

This second opinion is not meant to paint a bleak picture of an otherwise decent game. Twilight Princess debuted to rave reviews and fair showings with many informed game critics. Gene Park's review offers a fairly objective assessment of the game's worth in terms of the rest of the series: a true follow-up to Ocarina of Time, even if it is formulaic. And regardless of rough graphics and the "cannon room" bug killing my 30+ hour save, the final battle felt as gratifying as the first time I beat Gannon way, way back in 9th grade. But ultimately, Twilight Princess is not the game of the year and, for me at least, was not worth the over-long wait.

What you don’t understand is that no game is perfect. All games have their own bugs and glitches. Beta-testers can find a lot of bugs, but they can’t discover everything. For that kind of bug, did you ever realized all the work it would need to discover it, other than randomly ? Beta-testers would have to save and quit in every single room to see if there’s something screwed up… They aren’t machines, they’re humans. And today games are a lot more complicated than 90’s games and it’s harder to discover bugs because there’s many possibilities. For example, discovering bugs… Read more »

I am less concerned about one game crashing bug, and an more concerned with what you call “excellent game design.” That is what I meant by tight and classy, in terms of pacing and whatnot.

I do agree, however, that that bug never should’ve been in there. It’s rather sloppy to have it in there. But I think most people can overlook one bug, as long as the action necessary to activate that bug isn’t a requirement by the game (saving in the cannon room).