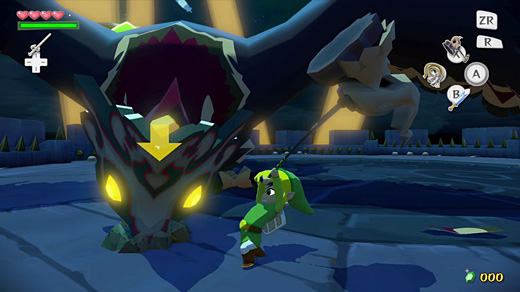 LOW The Triforce hunt, and being fooled into believing that it'd been severely overhauled.

WTF That kid with the massive, dangling booger.

It's funny how different The Legend of Zelda: The Wind Waker's notoriously cartoonish style looks now that we've stopped being frustrated with Nintendo's refusal to shift away from their family-friendly image. I know that the drab landscapes and chest-thumping bravado of today's design climate makes for an easy target, but really, couldn't we do with a little more color, a little more humor, and a little more imagination these days?

Remastering the game for Nintendo's first HD-compatible console was inevitable, and the effort has paid off because this thing looks absolutely magnificent. Most of the flaws that would be dead giveaways of the game's age (like textures and particle effects) are cleverly masked through stylization, while the vivid color palette, exaggerated architecture and fluid animations are all perfectly intact. I can't think of a title that's aged as well as The Wind Waker has, at least visually. With a sharpened-up image, this ten-year-old game suddenly looks more appealing than nearly anything else that's been released this year.

On the surface, The Wind Waker follows the series's usual action-adventure template, putting players in control of Link and alternating between overworld navigation, dungeon-crawling and swordplay. What I've noticed over the past decade is that while The Wind Waker is among the franchise's most controversial titles, it's one of the most consistently popular among non-Zelda fans and it's easy to see why. This is one of the most distinctive titles in the Zelda roster—partly for its visuals, but also for its scope and ambitiousness. 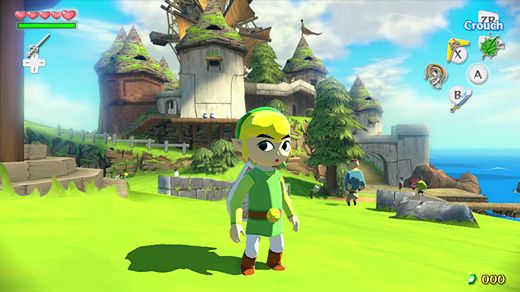 Set on the enormous and impossibly blue Great Sea, The Wind Waker tasks players with physically sailing between several dozen islands. Overworld travel by boat can take quite a bit of time, and it's a design decision that slowed the game to a crawl for some people. Yet for many others (myself included), it perfectly accentuated the overwhelming scale of the world that Nintendo created here.

Judged strictly by the elements that usually make Zelda tick, The Wind Waker is actually nothing special; the bosses are somewhat unimaginative, and the dungeons and puzzles never really stumped me, even on my first run. Where the game makes up for it, though, is arguably the best world-building that the series has ever seen. It's a marriage of impeccable attention to detail—every single NPC is uniquely designed and there's some very clever integration of Zelda mythology. The story is also surprisingly excellent thanks to unexpected twists in the second half. Series fans who haven't played The Wind Waker yet should try their best to keep the experience unspoiled.

Above all of that, the game is just vast. One of my favorite memories is the experience of exiting the forest in Ocarina of Time, strutting onto Hyrule Field and gazing at the silhouette of the giant castle in the distance. That moment might be lost to gamers younger than myself, but setting sail for the first time in The Wind Waker and watching Dragon Roost Island slowly rise out of the sea is just as rewarding, and that sensation is repeated dozens of times throughout the adventure. Making such a massive, exploration-friendly game only works if it's a world that we want to explore, and The Wind Waker is so rich and beautiful that I was always thrilled by the prospect of hopping aboard my boat and setting out to find something new.

While most of the tweaks made to mechanics and design in The Wind Waker HD are probably too subtle to be noticed by those who haven't played the original, there are two particular improvements that I feel are noteworthy. The first is Hero Mode, which doubles enemy damage, removes recovery hearts and is available from the start. For those who've complained in the past that The Wind Waker was too easy, here's the answer. 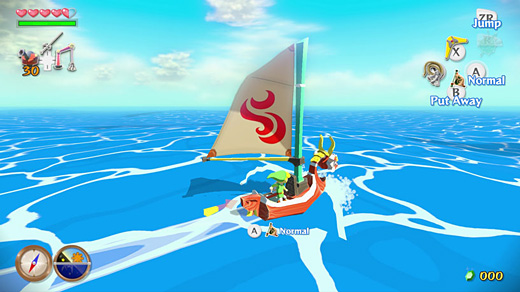 The second is the Swift Sail, which greatly increases the speed at which the boat moves and automatically changes the direction of the wind. This means that the player doesn't need to keep pulling out the baton and playing the same song every time he or she wants to turn. I wish that the Swift Sail had been a bit easier to find—it must be won from the auction house on Windfall Island at night, and it's not even guaranteed to be the first item to go up for grabs—but it's a massive improvement for anyone who wants to speed up the process of travel.

What's not so worthy of mention is the much-hyped trimming down of The Wind Waker's notorious Triforce hunt. For those unaware, the game's home stretch forces players through a fetch quest that requires hours of gathering clues, completing combat trials and needlessly wandering about. It brings the adventure to a dead stop and comes right before the final dungeon, when players can just taste the end of the game. It was supposed to be cut down for the rerelease, but it's still more or less intact, the only difference being that there's a bit less fishing for sunken treasure this time around.

While that's the most extreme example, there's plenty of other padding to be found here. To open the game's final two main dungeons, Link needs to travel to two completely separate islands for a pair of plot-essential items. Before he can reach those islands, he needs arrow upgrades from yet another location that's only accessible by using a song that can only be learned from a specific location at sea after the game's halfway point. After Link has done all of that, he still needs to learn two new songs, find the specific NPCs who can play them, and bring them back to the temples' entrances. The Wind Waker is full of stuff like that.

Honestly, though, I never took major issue with these pacing problems until I replayed the game. When I knew where I needed to go and was only interested in revisiting the story, all of this milling about pulled the experience down. But, The Wind Waker is so immense and absorbing that it'd feel like a crime for Nintendo to not make players take full advantage of their creation, even if they went a little overboard at times. To those who've never played before, crank the difficulty up and hunt down the Swift Sail as soon as possible. For those returning, the game's still flawed, but the stunning visuals, terrific story and jaw-dropping scale make it worth re-experiencing anyway. Rating: 8.0 out of 10.


Disclosures: This game was obtained via paid download and reviewed on the Wii U. Approximately 25 hours of play were devoted to the single-player mode, and the game was completed. There are no multiplayer modes.

Parents: According to the ESRB, this game contains animated blood and fantasy violence. One surprisingly violent image near the end of the game is probably the sole reason for the upgrade to an E10+ rating. Otherwise, this is very charming and kid-friendly material.

Deaf & Hard of Hearing: The dialog is entirely text-based, so that won't be a problem. Music occasionally plays an important role in the story (mainly through use of the titular conductor's baton), but actually hearing it isn't vital for progression.

I can’t wait to see the game in action. I’ve only experienced Wind Waker on the GameCube and this game looks amazing with the new graphical update. I know there is a lot of fetch quest stuff, but I always fall in love with the world of Hyrule or where ever the Great Sea is and would love to play through it as long as possible.

I am a huge Zelda fan and I may finally be getting a Wii U this year after taking a wait and see approach since launch. This is the kind of game Nintendo needed to make and I am so glad that we get HD Zelda. I wouldn’t have minded if they just uprezed the Gamecube version but all of these videos and screens make me want to see this thing in action.

I also want to try the Triforce hunt. High five to Nintendo for correcting that. Nice review btw.