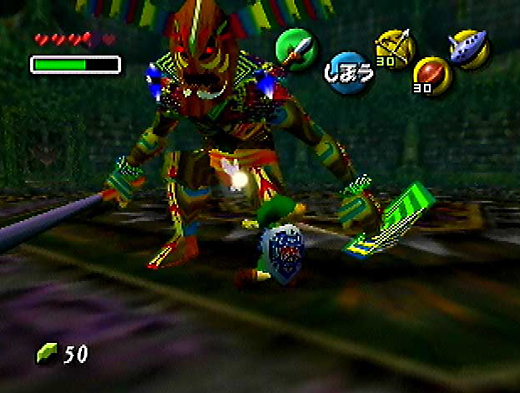 "It's like déjà vu all over again." – Yogi Berra

Writing a review for a game in Nintendo's Legend of Zelda series is different than writing a review for other games, because Nintendo's work allows discussion of higher level elements such as form and structure rather than implementation. The camera for example, which has been the bane of most other third-person games, Majora's Mask somehow improves from Ocarina of Time. It's perfect, both in placement and behavior, and does wonders for immersing the player in the game. The controls that are both complex and effortless reinforce the fact that Nintendo understands and practices the fundamentals of game design better than anyone in the industry. It's wasted ink to say how much of joy comes from playing Majora's Mask, just because it's from Nintendo and we expect as much. From this statement, we can focus more on the structure and form of the new elements introduced into Majora's Mask.

The centerpiece of the sixth Zelda game is Clock Town, a large bustling city that is literally and figuratively the heart of the game. The city is beautiful and features great architecture, but the real magic is in the inhabitants that carry out their daily routines in the town's streets, shops and homes. For example, you can follow the mailman performing his rounds in the morning, afternoon and evening each day. You can see the gradual construction of a tower by workers, each day climbing higher. All the characters in Clock Town have a sense of the impending doom, worried about the gigantic grinning face looming in the sky. Your role is to somehow fix the world in a Groundhog Day-like manner, setting things right for individuals in the town. This may be as simple as listening to one of them tell a story of a sad thing in their past or as involved as reuniting a pair of lovers torn apart by evil plans.

In this manner, Majora's Mask uses the time in Clock Town in a completely different manner than Shenmue, an adventure game by Sega that features a similar time-driven town. Most of the characters in Shenmue operate similar to well-rehearsed walk-ons; they flow through the cities and have a daily pattern, but they serve more as well-crafted decoration than an integral part of the game. In Majora's Mask there are far fewer characters, but you must understand their lives in order to help them. Helping them often involves following them the entire three-day cycle and is simultaneously the most boring and exciting element in Majora's Mask. You follow the character around all day, bored to tears waiting for something interesting to happen, but when something does occur, it's often a memorable moment that defines the character and the game, making your patience worthwhile. After walking in the footsteps of the townsfolk, the player begins to understand the town as one would understand a old neighborhood, an area filled with characters with real lives. This intimate familiarity with the complex workings of the community combined with the knowledge that you have helped these people is rewarding in a wonderful and powerful way. 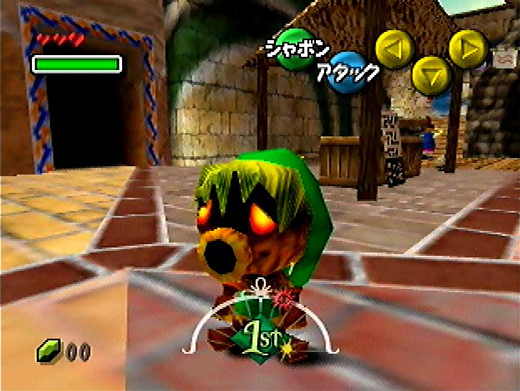 The only letdown about Clock Town is that the rest of the game is nothing like it. Aside from the local ranch, the other settlements in Termina are populated by typical RPG inhabitants; characters that are fixed in place with no home or life, repeating themselves, and completely oblivious of the moon attempting to smash into the planet. This inconsistency is unsettling because it pops the delicate bubble of immersion. It seems that Nintendo worked very hard to create the intricate video game environments in Clock Town and then forgot to apply its meaningful characters and depth of interaction to the inhabitants of Termina. The inconsistency between the town and the rest of the world often drops the player's expectations of the game from something revolutionary to a standard Zelda adventure.

Not that being a "standard" Zelda game is by any means a bad thing, but when the game slips, it feels more like falling into convention than making a real stumble. This is because the mechanics of the Zelda series is both its greatest strength and weakness. The dungeon romp gameplay has been nearly unchanged since the NES classic in 1985. You wander around the overworld and perform a task to open a dungeon. In the dungeon, you wander around—fighting monsters and solving puzzles to uncover the map and compass. You fight a mini-boss to gain a special item which allows you to access more areas of the dungeon, which in turn allows you to get the boss key which unlocks the final battle. It's like Swiss clockwork in its effectiveness, predictability and precision, and has served the Zelda series well, acting as a guide for players and a thoughtful framework for the designers to explore. It is also an elaborate cage that is preventing the Zelda series from growing into something more interesting.

For the first time in the series, the dungeon system in Zelda has begun to show its age. This may be the result of the dynamic Clock Town that brings the game into the fourth dimension, making the dungeons seem lacking in their mere 3-D nature. It may be the uninspiring final bosses that are a pale shadow to the great conflicts in Ocarina of Time. (Though the mini-bosses have never been better, with the exception of the oft-repeated Wizrobe.) It may be the result of familiarity with the items from Ocarina of Time. I walked into many rooms in the first two dungeons and immediately completed them in my head because they were using the same game mechanics as Ocarina of Time. Fire arrow there, hookshot here, whammo; now all I have to do is find those items. I believe the issue is that the Zelda dungeons have always been a way for the designers to explain to the player the fundamentals of the game world in bite-sized lessons. In Majora's Mask, it seems as if they have little to say, or at least nothing as new or as interesting as the other advancements introduced in the game. Fortunately, the final two of the four dungeons are among the best in the series, and succeed by pressing level design to the very edge allowed by the framework. While the later two are better, they don't directly address the limiting nature of the mechanics and are more of a stop-gap fix than a real solution. The dungeons are still enjoyable and a worthwhile challenge, but they have not evolved enough to keep pace with the other advances in the game. 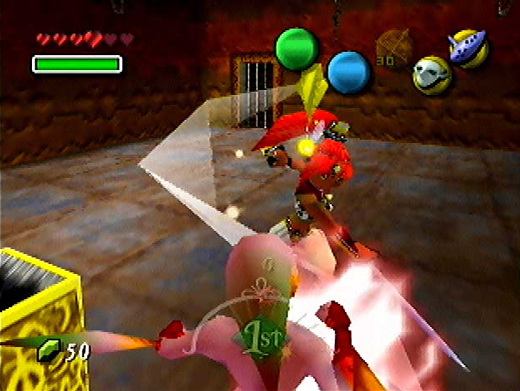 While the dungeons have begun to show their age, some elements of the reward system have completely broken down. The major rewards are fine, especially the new masks. The problem is that the world is saturated with little puzzles and mini-quests that reward the player with quarter hearts and money. Extending one's health is usually a very compelling reward in games, but Majora's Mask uses it so frequently that it loses its impact. With a astounding 52 quarter hearts available in the game, you can fill Link's life up to 20 hearts, 10 more than ever possibly needed. Now that Link can carry six bottles with fairies, the game can even be completed without finding any extra life very easily. The spectre of death was removed from the Zelda games since A Link to the Past, but the bloated health bar removes a lot of the tension in combat and allows the player to be sloppy. The money issue is somehow worse. The Nintendo developers still believe that providing a player with cash and without anything interesting to do with it is somehow a compelling reward. The situation has improved somewhat from Ocarina of Time with the inclusion of a bank to store your excess piles of rupees, but outside of the handful of purchases and a few mini-games, your money gathers dust in the bank. It is frustrating to complete a difficult task and receive a worthless reward.

While there are elements of Majora's Mask that could have used some work, most of the game is executed to perfection and exceeds the great heights of the series. For example, the narrative in Majora's Mask succeeds in spinning a well-crafted story that is less innocent but maintains the beauty. Characters spend their final moments prior to destruction drowning their sorrow in milk, cowering in their rooms, or arguing over evacuation. The game's cutscenes (especially the Zora guitarist and the Goron parent) are artistic, brief and extremely potent, showing the industry how cinematics should be used in games. The main story gets left behind at times, but the subplots do a great deal of drawing the player into the world.

The transformation masks effectively borrow the main hook of the Kirby games. For the most part, all three forms are wonderful. Each of the characters has its own feel and identity that makes them unique. Goron Link walks slowly and can't jump, Deku Link is highly flammable, and Zora Link is much more functional in the water. The special abilities that the characters have are great fun, but seem more fitting to a Mario game. Don't get me wrong, tearing through the overworld as a huge Goron Garden Weasel and porpising above the water as the Zora are two of the best things in Majora's Mask. The only real complaint is that the characters can't use items that seem entirely appropriate. For example, as a Goron, the bomb people from Ocarina of Time, Link can't use bombs. Unfortunately, all of the transformations severely limits the items that you can use, making the masks more of a temporary effect to evoke than a separate skin to grow into and understand.

The Legend of Zelda: Majora's Mask takes one big step forward while the other bum leg drags along. In spite of its inconsistency, it improves upon the amazing Ocarina of Time by fixing a number of gameplay issues and introducing the transformation masks and the adventure game elements in Clock Town. Even though the dungeons and rewards need much work for the next game in the series, the sum is an amazing game that is, in this reviewer's opinion, the best game of the year. The only reason I docked it half a point is that the Majora's Mask team inherited a wonderful game engine and that they should have made the entire package more consistent. Rating: 9.5 out of 10.