The King of Kong: A Fistful of Quarters (2007)
Directed by Seth Gordon
New Line Cinema 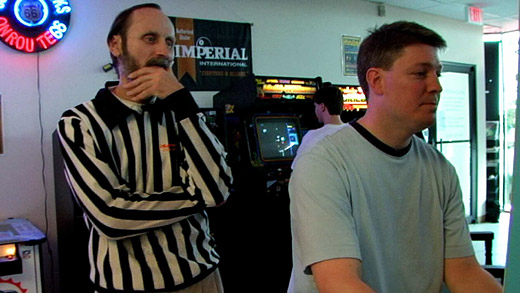 There's not much to say about Seth Gordon's The King of Kong: A Fistful of Quarters

that hasn't been said already. While "video game documentary" is about as niche a genre as you can get, King of Kong is easily the most famous of the genre. The tale focuses primarily around two men: Billy Mitchell, an expert at classic video games, and Steve Wiebe, a younger, inexperienced gamer. Both men are competing for the world record in Donkey Kong.

Let's get this out of the way: King of Kong is a documentary in the loosest sense of the word.

Don't get me wrong, I love this movie, but its biggest strength is also its biggest weakness: King of Kong skews unbiased truth for entertainment. On the basis of principle, many would argue that documentaries have a certain responsibility to present as many facts as possible as truthfully as possible. That may be true, but it often doesn't make for great entertainment. Go into King of Kong treating it as entertainment and you will be satisfied.

Steve Wiebe is portrayed as the family man; he's a loving father who has failed in life more than he has succeeded. In fact, failure seems to be the theme of his life. He fails at sports, fails at music, and even fails at being able to keep a job. Interviews with his wife and family seem to confirm this. He works hard and applies himself to whatever it is that he sets his mind on, but the floor seems to fall out from under him sooner or later. While unemployed, he happens to start playing a Donkey Kong arcade cabinet in his garage as a hobby, and inevitably invests enough time in it to get good. Really good, as in learning the patterns of the enemies and being able to tell you about them from memory.

Billy Mitchell, on the other hand, is portrayed as a prodigy from the start. Successful in many world records when it comes to video games, Billy knows that he's good and isn't afraid to let everyone else know about it. When he's not breaking video game world records he's running a successful hot sauce business (Rickey's World Famous Sauces). In fact, he and Steve Wiebe couldn't be more opposite, which is what makes the story so compelling. Steve is young and clean-cut, while Billy is graying and sports a mullet. Steve has a wife and kids, and is reminiscent of your average working class Joe, while Billy has his own business, and has a spouse that some would say is a trophy wife. Steve is reserved, even shy, while Billy likes being the center of attention. Steve just wants the Donkey Kong world record, while Billy has had several world records for years. 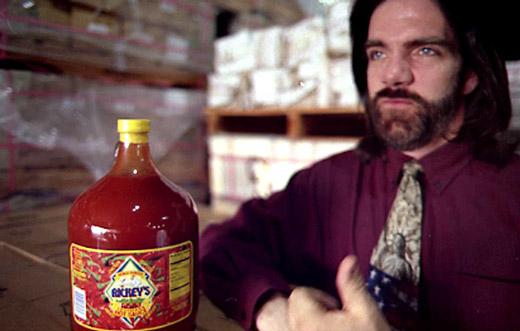 It's unlikely that Steve Wiebe is a perfect man. To be fair, it's unlikely that Billy Mitchell is represented a hundred percent accurately in King of Kong too. Instead of focusing on the intricacies of the arcade scene, King of Kong focuses on Steve Wiebe as the underdog, a man fighting against Billy Mitchell for a world record. It's a classic David vs. Goliath story.

In fact, Steve fights not only against Billy Mitchell, but against all of Twin Galaxies—the video game organization that verifies scores. The tight knit community knows Billy Mitchell and trusts him, so they have their suspicions when a newcomer claims to have beaten his score at Donkey Kong. I won't spoil it for the few that haven't seen King of Kong yet, but sure enough the underdog finally gets the recognition he deserves in the final act of the film.

Supporting Steve and Billy are interviews with familiar faces from the Twin galaxies scene: Walter Day, the founder of Twin Galaxies, Brian Kuh, a referee for Twin Galaxies and a fan of Billy Mitchell, Todd Rogers, an expert at Activision games, Steve Sanders, a former Donkey Kong fraud, and Roy Shildt (a.k.a. Mr. Awesome—who is arguably the strangest of them all). If you have seen Chasing Ghosts: Beyond the Arcade before King of Kong, then many of these people will be familiar to you, as both movies cover similar arcade gaming territory. (For what it's worth, Chasing Ghosts plays likes a great accompany piece to King of Kong, focusing more on the history of Twin Galaxies and the record holders themselves.)

It may not be an unbiased documentary, but The King of Kong: A Fistful of Quarters

has the same great underdog story that movies such as Rocky have had: one man going against seemingly impossible odds—and often losing to a bigger, more resourceful opponent. Yet much like Rocky Balboa, you can't help but respect Steve Wiebe at the end of it. He may not be the best in the world at any one thing, but he's someone that you can root for, regardless of your knowledge of video games. Rating: 10 out of 10.

Thanks for pointing that out everyone. I’ve made amends. I appreciate everyone’s keen eye. 🙂

Thank you for stating what we were all thinking. Is this reviewer aware of when this documentary came out?

This review does summarize the themes in the movie very well, though criticizing the movie for not mentioning Hank Chien is a bit like criticizing a JFK interviewer for not asking about Bill Clinton:

Hank Chien didn’t begin to play Donkey Kong until after the movie came out and in fact (as Kennedy influenced Clinton) was encouraged by the movie to take up Donkey Kong.

Great review of a great movie. For my money, it’s one of the best documentaries ever made, and not just because it’s about video games. I think it captures people at their very core, easily wounded and extremely competitive. It also happens to capture that magical sort of resilience you mentioned that compares favorably to Rocky.