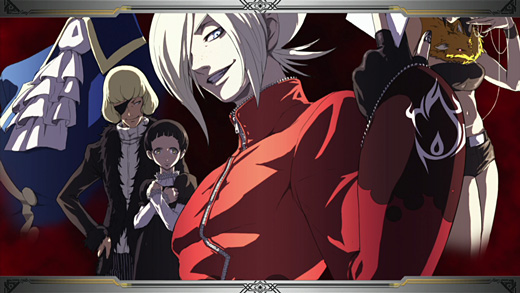 LOW Bosses that combo cheap moves over and over.

WTF As a newbie to the series, some of the female animations. Srsly?

Early on in life, fighting games were a staple in my household as my brother and I cheerfully punched in combos and mastered them—Killer Instinct was our game of choice—but I've been completely inexperienced in The King of Fighters series. Among my first observations: this game is absolutely gorgeous and the Xbox 360 controller I was using had an absolutely dreadful D-pad.

Thankfully, I was up for learning how to play with the thumbstick, which was kinder to my fingers as I performed semi-circles forward, backward, twice in a row, and generally moved from frantic movements to more fluid swirls. Having only played Smash Brothers for a number of years, there was a certain delight in relearning how to execute some of the more difficult movements required for various special attacks.

Of course, in today's world, there tend to be deeper systems in play, and from what I've read, the previous The King of Fighters game was much more complicated. As it was, I kept a passing eye on a Drive gauge that allowed me to pull off move cancellations. Its method of replenishment included both delivering and receiving damage, so it was something that was often in supply as long as the fight kept moving along. There's also an EX gauge that powers up all manner of special attacks, useful in delivering painful decreases to opponents' health bars.

Unfortunately, being unfamiliar with these systems I entered the tutorial section, which ostensibly should have cleared the functions up for me. It did not wholly succeed.

While it did explain the rudimentary functions of all the various UI elements, when it asked me to perform some moves, I was left floundering as I tried to execute the commands that appeared onscreen. Thankfully, we live in the age of the internet, and it was quite easy to see that I could ignore the tutorial's directives and manage the moves it wanted with better methods—which is to say, it's easier to rely on FAQs for questions about exactly how this game operates, as the game does not offer the best explanations. Thankfully, I was not immediately repulsed by the learning curve and the animations of the characters I played drew me in to enjoy the experience. 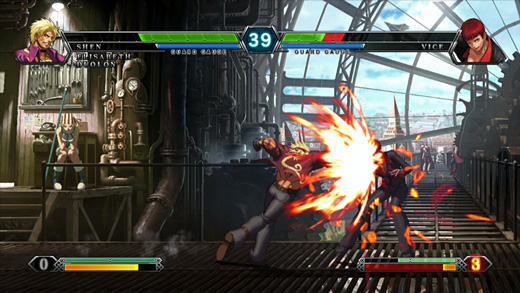 Instead of depending on the ever-increasing use of 3D elements found in the genre, the animations used here are quite pleasing—a real visual feast. With that comes the flip of the coin, which was staring agog at some of the female combatants, and wondering rather wryly why they bothered putting clothes on them in the first place.

The character roster is quite full of all manner of combatants, from the typical meatheads to small girls who throw ice at foes and have teleporting mother figures. While some female fighers made me sigh in the exhausted manner of someone who has been gaming for a while and seen women wear high heels in both formal and the most implausible situations, I was happy to see a rather broad range in the roster's representation. The King of Fighters offers more tomboyish women to androgynous men, and the reverse is certainly true as well.

There is a campaign involved, but it's rather puzzling to piece together, particularly for anyone not familiar with these characters. While it's fairly easy to parse the personalities presented (well-bolstered by the art and animation) the story itself was convoluted in a way that made the relatively simple branching storyline seem more akin to an absurdist choose-your-own-adventure book. Then again, the achievement for seeing all the various vignettes that pepper the campaign is called "Do you understand now?", so I imagine my utter befuddlement was rather the point of the exercise. However, there's no confusion in the fights, and they're a joy to behold. (They also require a bit of strategy.)

During the campaign, players are locked into set teams of three, with the order being determined concurrently with the opponent. Instead of rapid swapping, one plays one character until they fall, then proceeds to their next pick. When staring at enemy teams, it was often trying to determine whether I wanted my heavy to go out first (they not being my particular favorite to play) to deal as much damage as possible, or to save them as a last-ditch effort. Do I sacrifice my weakest early? Do I hold them in reserve in hopes that I never use them? Valid questions, and given the fixed nature of the campaign's settings, one I often faced.

On the other hand, playing outside of the campaign (including online battles) allows for customization of team, colors of the characters, and many other small odds and ends. My own experience with the online portion was enough to tell me that while I had lots of learning to do, there were plenty of other people in the same boat. Thankfully, the experience was quite easy to set up, and the battles ran smoothly. There were occasional hiccups, but nothing that disrupted my play often. I can only speak for my own experience in that regard, however, as I have seen various complaints from other quarters.

As a newcomer to The King of Fighters, I can say I am intrigued, but not fully hooked as yet. It would be nice for a fighting game to be more interested in explaining its systems in ways that don't require plenty of outside research, but despite the story's best attempts to confuse me, the characters' personalities shine through. (Keep open the search engine of your choosing if you don't immediately grok the systems, however!) Rating: 7.0 out of 10.

Parents: According to the ESRB, this game contains mild language, suggestive themes, use of alcohol, and violence. As mentioned, some of the female characters are extremely sexually suggestive. One of the characters actually powers his moves by drinking alcohol.

Deaf & Hard of Hearing: There are no particular audio cues that are necessary, as the animations are such that they can easily be learned and are often more informative than the aural cues. All dialog is presented as text.

Posting this review on the 13th day of the month (and on Friday the 13th no less)?! I see what you did there…