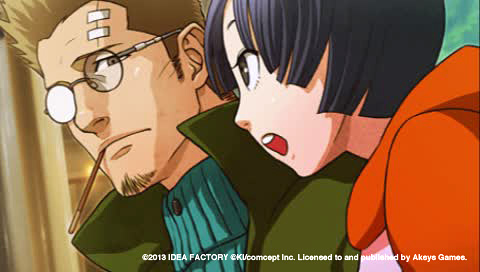 LOW Typos in a game that focuses on text.

Aksys Games is on a roll. Western publishers willing to bring over otome games (romance titles aimed at a female audience) are all but nonexistent in the West, but in just over a year the company has released not one, but two on the PlayStation Portable (PSP). While their first, Hakuoki: Demon of the Fleeting Blossom, strove to reel in more than the otome crowd with darker themes and an action-packed plot, Sweet Fuse: At Your Side

, takes a much sillier approach and is all the better for it.

It's hard not to be immediately enticed by Sweet Fuse's totally out-there plot. Players are put in the shoes of famed game developer Keiji Inafune's fictional niece, who is attending the grand opening of her uncle's video game-themed amusement park. All hell breaks loose when a talking pig takes Inafune and the other attendees hostage, and demands seven people participate in a game of life-or-death to secure their freedom. From here, the player character (her default name is Saki) is thrown into a weeklong series of twisted puzzles with six handsome men.

While the "deadly game" premise may sound similar to other titles such as Zero Escape, Sweet Fuse forgoes any real puzzle mechanics in exchange for straight-up visual novel gameplay, consisting mostly of reading through the story and choosing from a number of options to decide how to advance the plot.

Though there are selections that result in "wrong ends" and Saki has an "explosive insight" ability that has players choosing from a number of keywords in a very basic minigame, Sweet Fuse contains next to no traditional gameplay. This shouldn't be an issue for those familiar with the visual novel genre, but the premise of being stuck in an amusement park and forced to solve puzzles does beg for a little more interactivity.

Where Sweet Fuse excels, however, is in how its narrative is told. Not only does it manage to bring together one of the most diverse casts I've ever seen in an otome game, but each character is interesting and well-developed, including the player's. While the ragtag cast of a reclusive gamer, hardened detective, mystical fortune teller, brawny male escort, jaded journalist, and airheaded boy band member may seem full of clichés and archetypes at first glance, each contains his own twist on the expected trope and grows over the course of the game. 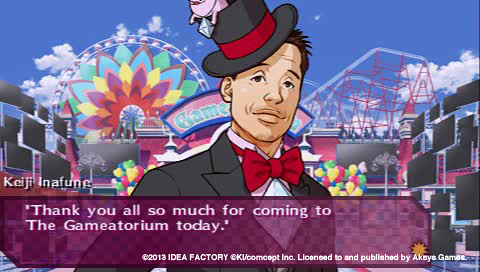 On top of this, main character Saki is a boisterous, hotheaded gal who speaks her mind more often than not. She's a breath of fresh air in a genre plagued with near-silent protagonists intended to allowing the player to project their own personality onto them.

During one of my favorite scenes, the player has the option to have Saki call one of the guys out for saying she shouldn't have done something because she's a woman. If that option is chosen, Saki gets angry and tells him what he said was sexist. Instead of becoming defensive or weird, he apologizes and promises not to do it again. It may seem like a small example, but it's one of the many thoughtful interactions that makes Sweet Fuse a joy to play.

Over the course of the game, the character interactions and story only get more interesting, which kept me hooked and wanting to see more even after I beat the game. One playthrough can take anywhere from 5-8 hours, but in order to get the most out of the story, at least two playthroughs are recommended (there's even one character that can't be accessed until the second playthrough).

Reading the story never feels like a chore, as not only has the text been excellently localized with Aksys Game's usual flourish, but the narrative is quite humorous, making it a delight to see what antics the cast will get up to next. In addition, the music is surprisingly good, fitting each scene's mood perfectly and standing out without taking away from the text.

Though Sweet Fuse is an otome game, the romances are more subdued than many others in the genre. This makes them feel much more organic and genuine, and in many ways, the interactions between the male characters were more interesting than the romances themselves. This may turn off those who want to see more lovey-dovey, but it should make the game more palatable for players new to the genre.

In the case of otome, it's an unfortunate truth that while many feature a varied array of attractive male suitors, they generally offer weak plotlines. Sweet Fuse: At Your Side

, however, is the perfect marriage of compelling story and engaging characters. Not only is it a great otome game for fans of the genre, but also a title that should appeal to anyone who likes visual novels as well.

Now, with two otome games under their belt and one more on the way, I can't wait to see what Aksys Games will do next. Rating: 9.0 out of 10.

Disclosures: This game was obtained via publisher and reviewed on the PS Vita (PSN download). Approximately 10 hours of play was devoted to the single-player mode, and the was completed twice.

Parents: According to the ESRB, this game contains blood, language, mild violence, and use of tobacco. There is some swearing, violent scenes such as a character getting shot, and references to alcohol in the dialogue. I'd say the content of this game is probably much tamer than what is shown on evening television, and all of the "action" is depicted in storybook-style illustrations, but I wouldn't advise this game for very young children due to the blood and violent themes.

Deaf & Hard of Hearing: This game is entirely focused on text and visuals, and as such the audio is complete optional.