The "X" is Pronounced "Cross." I Really don't Know Why. 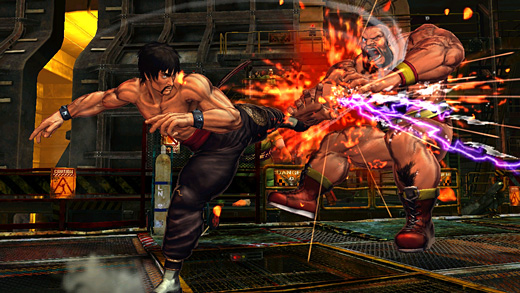 HIGH Seeing favorite Tekken characters do their trademark moves in a Capcom fighter.

When this project between Capcom and Namco first was announced, I was incredulous at the concept. Two of the fiercest competitors in the fighting game world suddenly cooperating? What's next, a game from Nintendo featuring Sonic the Hedgehog? Not to mention that since Capcom developed Street Fighter X Tekken

, I failed to see in what way it would incorporate Tekken, let alone avoid being pure Capcom. Would it be like the Marvel series, featuring over-the-top crossover attacks with three characters? Or would it be like Street Fighter and feature close-quarters combos and the occasional Ultra attack? Either way, Capcom fighters rarely transcend their formula. I was not anticipating much more.

I went into it prepared to hate it utterly, but after playing it for eight hours and fiddling with the content, I was pleasantly surprised. Street Fighter X Tekken—or to pronounce it correctly, Street Fighter Cross Tekken—is one of the better Capcom fighters released in recent years. While it isn't so by a huge margin, it stands proudly by distinguishing itself from the flock.

The core combat in Cross feels like traditional Street Fighter, with both special moves and the heavy/medium/light versions of punch and kicks, giving the player options to develop their own combos and the ability to swap characters mid-combo to extend them even longer. Also carried over are EX attacks and Super Combos, things that are staples in Capcom fighters. However, I was surprised to find that when my main man Akuma went down, the game didn't swap me over to my second character.

What's this now? Do I detect the influences of Tekken Tag in this game? Why, I believe I do! 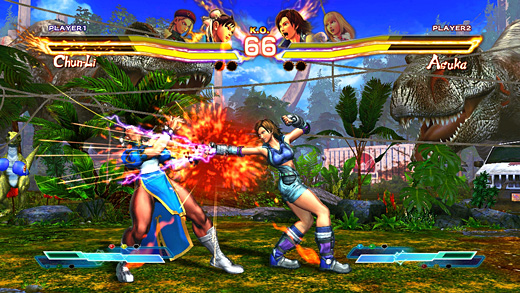 Forcing players to swap between characters often avoids the Marvel problem of having characters like Arthur who are only used for their assists, or like Phoenix, who are used to win games after two other characters have built up a super meter. Though I am hesitant to say this, Cross simplifies the game substantially, and in a very good way. There is less to learn; it's more accessible. It takes elements from Marvel and Street Fighter and comes out unique because of it. Furthermore, I found myself surprised how well crafted the marriage between Street Fighter and Tekken is.

Yes, it's true—the Tekken cast has indeed been reworked to better fit with Street Fighter's style. As an example, Steve has his trademark jukes which allow him to evade, and Jin still has his guard ability that deflects, but both have been given ranged abilities. Jin's is an 'orb' that causes knockdown (something hadokens don't do), and Steve's is a punch with an augmented range. Even those like Hwoaorang who gain no ranged attack still have gap-closing techniques to get them inside, like a flying three-part kick.

Purists will complain, but these kind of attacks are exactly what they need to keep up with the rest of the cast. Having a way to zone people on Jin (zoning being the act of projectiles pushing enemies out of their most effective ranges, such as Ryu's hadoken at full screen range against a melee-only Zangief) is just what he needs to get inside and cause some damage. In fact, despite my uneven skill at Street Fighter, I was soon effectively zoning with orbs until I could get close enough to take them apart with Jin's excellent normals and specials.

There's a lot of good stuff in here for newbies, and even though I am a huge fan of the genre, I've never been terribly good at fighting games. SFxT fits very nicely into a middle ground between Marvel and Street Fighter—it's not as complicated as the former's two partner support/tag characters, and it's not as technically demanding as the latter. In fact, SFxT is genuinely the first time I've played a fighter that's had such a wide skill range. 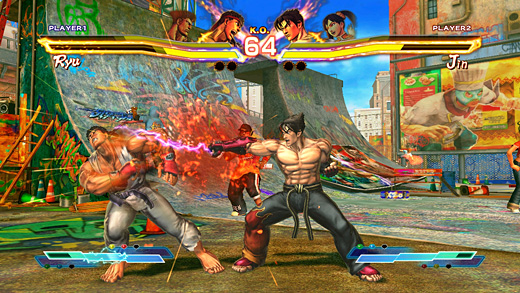 With intermediate experience, I can wade around in the pool with moderate success, using combos and air combos, swapping to my partner, and using EX and Super attacks. Advanced players can utilize the entire group of abilities, including lots of tricks with Super Combos, crossovers attacks, and Pandora mode. The depth of skill at high end play is still exceptionally ridiculous—it is a fighting game after all— but it's got the smoothest curve in the genre yet.

However, as much as I enjoyed the game, SFxT is like most Capcom fighters in that it gives players a large pool of abilities, but inevitably at some point casual players will run into a combo that completely escapes them. I stumbled upon one in Ken's tutorial: Do a special attack, fine. Light, medium, heavy, fine. Standing medium punch, crouch medium kick, hurricane kick, and then everything goes to hell. I found out later that depending on how close the character is, the punch is different, and it disrupts the combo. Maybe if the game told me this I could react accordingly? It feels like the game requires players of varying experience levels to understand things serious Street Fighter players have known for decades.

SFxT also experiments with offbeat equipment-like items, known as gems. Each character has several different loadouts to experiment with, including attack bonuses, damage reduction, speed, meter usage and the like, and all started by different triggers like connecting with special moves or getting hit by an EX attack. These gems are an interesting idea, but I'm not terribly sold on the concept. There's no way to turn them off, and while it's possible to roll with the default kits, it feels like messing with the metagame a bit more than I like. I admit that the gems offer customization, but for the most part a player would want all offense for high-damage characters like Akuma, and high-defense for those with slower approaches, like King, and players get most of them from the get go.

I could talk further about the story (they barely tried), the graphics (aside from ugly guys like Paul or Law, the game looks great) or the music (not noteworthy) but all of these things are less important than how it plays, and it plays great. It's mostly traditional Street Fighter, but that's not the point. The ways that it isn't Street Fighter set it proudly apart, and because of that, much to my surprise, Street Fighter X Tekken

Parents: According to the ESRB, this game contains alcohol reference, crude humor, language, suggestive themes and violence. Although some of the content may be a hair on the risqué side (mostly relating to the female characters, of course) the game is mostly in line with what can be expected from the fighting genre. Parents that are generally okay with letting their children play games where characters pound the daylights out of each other won't find any special reason to avoid this one.

Deaf & Hard of Hearing: Everything said has subtitles and there are plenty of on-screen prompts. Sound relative to position isn't important at all, so it's very friendly to those with hearing issues.