Partly Cloudy, with a Chance of Thunder 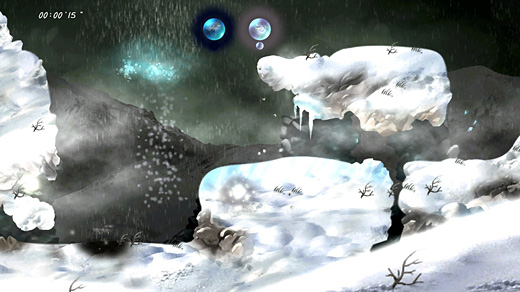 WTF Getting struck by lightning makes a seed jump?

Taking a break from all the shooting, slashing, blood, guts, sex, murder and other generally bad things gamers tend to spend a majority of their time doing in virtual worlds has to be a good thing. As such, playing with the forces of nature in Eko Software's Storm and helping a lonely seed find its way to fresh soil is a welcome premise, and perhaps a more psychologically beneficial use of time.

The core game is simple in Storm: use varying intensities of wind, rain, and lightning to guide a seed to a final patch of soil in each of  the game's increasingly complex levels. But is it entertaining? And especially as a puzzle game, is it rewarding?

Wind pushes the seed along a level path; two gusts blow harder. Rain will flow downhill, fill natural basins, and float the seed along accordingly—except for those seeds that don't float. The water will also make wood float and douse grass fires, which can be spread using wind. More rain equals higher water levels and more forceful current. For a different kind of current, striking a seed with lightning will cause it to jump gaps and other small obstacles, depending on its momentum. Lightning also reshapes the natural landscape by vaporizing logs and crumbling cliffs into many individual boulders. Just like the seeds, the boulders love physics. They're just much heavier and unaffected by mere wind and rain.

As one might expect, the "natural landscapes" in Storm wind up appearing quite contrived to accommodate progressive puzzle play, but while they do often take on funny configurations, the addition of new elements (grass in the summer, snow in winter, etc.) creates enough variety to build new puzzles without going crazy terraforming a mostly sensible world.

Sometimes, however, and especially in the early stages, the game is not quite a puzzle game, meaning there is nothing to actually figure out. Rather, the game asks players do perform very obvious actions to complete a level. With no narrative hooks to hold my interest, my irritation with any level in which I was just "going through the motions" was high, and my tolerance was low.

Many of Storm's puzzles do require thought and planning, though, and while players can turn the game into a trial-and-error process, the presentation encourages working things out in advance and executing through the combinations of resources at one's disposal. It's in the execution itself that the game sometimes falters.

On numerous occasions, I quickly figured out exactly how to navigate a particular section of a level, but had to spend a disproportionately large amount of time making the plan work in practice. Timing can be a big issue in certain sequences, and controls can be less precise than one might deem suitable for a game that works off of such a simple presentation. The time between a solution's conception and the affirmation of that solution's validity via a "Level Complete" message diminishes the sense of achievement for getting it right in the first place.

The idea that a production in modern gaming can be based on little more than a few weather processes (and the fact that the final product can come together and actually work as a coherent and enjoyable puzzler) is a commendable accomplishment for developer Eko Software. Though Storm's appeal wanes due to design and mechanical deficiencies, and also misses the opportunity for a more significant message through its chosen subject matter, it tries new things and generally succeeds. I'd love to see a second game expand and improve the formula. Rating: 5.0 out of 10.

Disclosures: This game was obtained via publisher and reviewed on the PC. Approximately five hours of play was devoted to single-player modes, and about 85% of the game was completed.