A Serious Trial of Suspending Disbelief 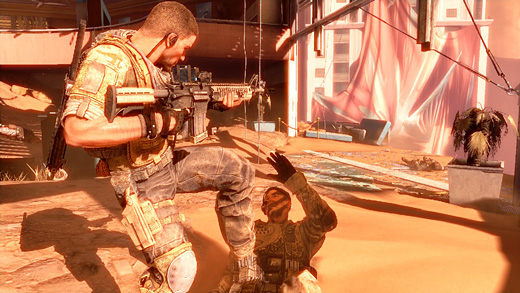 WTF Make me feel guilty after forcing me to murder 200 people? Yeah, right.

. He and I share similar opinions about the title, but I want to get a little more down and dirty on what I dislike about it. I'll get to the point on my criticism, which also seems to be everyone else's biggest praise. It makes—or should I say tries to make—a statement about heroism through violence.

Based on the buzz I'd heard from Twitter, it sounded like Spec Ops: The Line inspires guilt after making the player kill people in the game. Apparently aimed to disassemble the traditional military action hero schtick, it attempts to carry despair and dread and all the other feelings a player isn't supposed to feel about blowing an enemy's head off at point-blank range. Keeping this in mind, I was surprised when the first gunfight happened only a few minutes into the game, and it played out like any other shooter.

Actually, it plays out in a much tamer, less satisfying and less visceral way than most video game gunfights. Hold Left Trigger to aim, pull the right one to fire—nothing special and virtually no feedback. I thought there might be some kind of morality system involved that would tip if I chose not to kill enemies, but there isn't. The player has to kill them. There is absolutely no choice here.

I think there's supposed to be some shock value thrown in when U.S. soldiers start flooding in to attack Walker (the game's protagonist) for reasons unknown. This shock wears off in seconds, however, if it existed at all, because Walker and his commando buddies have to kill them or else the game won't proceed.

By the 1-hour mark, about 100 U.S. soldiers will have fallen victim to Walker's guns, and, again, there is no choice. The entire campaign, all 5-6 hours of it, is Walker cover-shooting through waves of soldiers, most of whom are American. Dubai was supposed to be deserted upon Walker's arrival, so I constantly wondered where all the soldiers were coming from. I was almost waiting for the game to reveal that Dubai was the site of some secret super-soldier cloning program, and somehow, that wouldn't have seemed out of place in a game that constantly pushed my suspension of disbelief further and further over the edge. 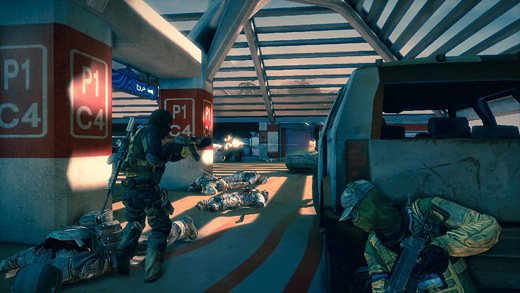 Speaking of suspending disbelief, Spec Ops wanted me to take its overly dramatic and repetitive themes of war, violence, sacrifice and post-traumatic stress disorder seriously, while also asking me to go along with the one soldier surviving several multi-story-high falls, a helicopter crash (with the doors open, of course), a semi-trailer accident in which Walker hangs off the side of the semi during the crash, not to mention constant waves of enemies shooting him.

As the campaign gets deeper, Walker descends from noble and soldier-like to vicious, murderous territory. Every time there's a moment after a gunfight when Walker acts a little out of order and aggressive, one of his annoying squadmates will comment about it, to the point where they get more agitated and violent in response to Walker's behavior. Both NPC sidekicks even have a mini-fistfight over Walker's questionable mission orders. The interjections were novel and well-paced at first, but by the sixth or seventh time they start questioning Walker's orders, it got extremely irritating. I was hoping for a cutscene where they'd die, so I wouldn't have to listen to them anymore.

This repeated scenario is equivalent to the game poking a stick at the player after every gunfight and saying, "Hey, what you're doing is wrong, you know. You shouldn't be killing all those Americans." It's interesting at first, but once the game starts bashing the player over the head with its attempts to make violence an issue, it gets extremely old, not to mention the fact that the player has no choice but to kill them. How can I feel guilty about making a choice that's not even there to be made?

If Spec Ops had about a tenth of the killing that it does and actually made an attempt to make the player feel something viscerally after kills, the situation could've been very different. It doesn't, and as such, I am not falling for its cheap, bulls**t guilt tactics.

There's a scene in Heavy Rain where the main character, Ethan, can murder an innocent man to prove his love for his son. That was a jaw-dropping moment, because he hadn't murdered 300 people on the way to that point. In contrast, Spec Ops desensitizes the player with so much violence at every turn, yet keeps trying to suggest that the player should remain sensitive to violence issues.

as a smart game that brings up the issue of heroism through violence into question. It's about as convincing as Zack Snyder's Sucker Punch being a film about feminism and female empowerment. Rating: 3.0 out of 10.

I see the criticism of no moral guidance called up a lot in this game, but that seems to be almost more of self justification for the actions you take in it. And what you do in this game, or any game of this type, is kill people or be killed. What many seem to forget is that this isn’t really their choice so much as it is that of the developer’s. In truth, games offer your very little in the way of choice or play up choice in a manner that is inconceivable, disconcerting, or downright meaningless. Consider, for… Read more »

The first hour of the game is intended to be dull. Several interviews with the devs have mentioned this. The thousands of soldiers you shoot throughtout the campaign – not real. Ever notice that lugo and adams never talk to anyone other than walker? Walker dies in the opening crash, everthing you experience in the game is his concious trying to convince him he was a hero, that he tried to do the right thing