Solid, but Brings Nothing New to the Table 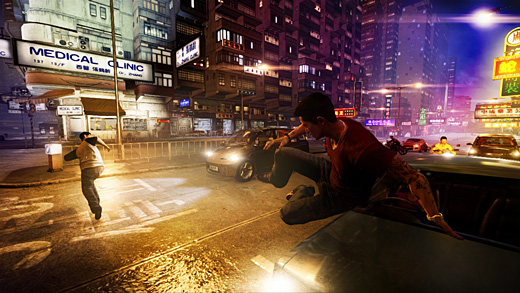 WTF Lucy Liu and Emma Stone's characters have only minutes of screen time.

was a hard game to play. It wasn't the difficulty, the dirty story or somewhat shocking violence that made it rough. It was hard in the sense that despite switching developers, publishers and avoiding cancellations, it didn't feel like anything special.

At every turn, Sleeping Dogs carries a been-there-done-that feeling reminiscent of every open-world game that's come before it. It's a spliced-together Frankenstein's monster that borrows from Grand Theft Auto, Batman: Arkham City, Dead to Rights, Saints Row: The Third and Assassin's Creed, and its whole isn't as great as the parts. It pulls its driving, shooting, chasing and hand-to-hand combat off well, but not well enough to be memorable after turning it off.

Wei Shen is the star—a former gang affiliate who's been doing something the game never really clarifies in California for a while. He's back to Hong Kong at the start, and deep undercover for the police as he infiltrates the Sun On Yee, a local gang in the Triad.

Much like every other facet of the game, the story reeks of stuff that's been done a hundred times before. Shen starts as a measly foot soldier for higher-ups who don't trust him. He rises up through the gang by fighting, killing and racing. Nothing new here, folks. The only slight twist is his undercover cop status, although it doesn't stop him from doing gang activity. By the game's end, I had killed more people than the Triad probably had in the past decade.

Most missions find an excuse for Shen to fight a group of enemies to show off its not-quite-Batman combat system. The hand-to-hand fighting is good, but because Arkham City is already out, I'll never stop wondering why games try to match it. Unlocking new combos is a nice possibility, but not necessary. Enemies generally attack one at a time, so I'd stand and wait for one to punch, then counter and unleash a combo. Rinse, repeat.

Gunplay doesn't show up until hours into the game. It's fine, but nothing special either. Take cover and pop up to shoot with occasional slow-mo.  Sleeping Dogs even miraculously steals the carjacking by jumping from car-to-car from Vin Diesel's Wheelman. Remember that game? No one else does, either.

The only times I felt pure bliss in Sleeping Dogs was when I was driving 80mph and leaning out the window to fire machine gun rounds at a pursuer's car. If Shen blows a tire off, the car ramps up under a glorious orange explosion in slow motion. Those moments were exhilarating and cinematic.

Sleeping Dogs has two skill trees during the campaign, one for Triad behavior and one for Police behavior. Most rewards aren't that useful, though. I found myself arbitrarily picking some and rarely, if ever, using them. The most baffling upgrade is the Face meter, which is essentially a reputation meter. It only increases if you do certain non-mission-related jobs and favors.

The favors are usually simple, such as driving someone somewhere or apprehending a thief. The rewards tied to upgrading the Face meter mostly lie in new clothing options at stores or cars to buy. The confusing part is there are clothing shops open and stocked with merchandise Shen can't buy until his Face value is up to a certain level, rendering the shops completely useless. By the end of the game, my Shen was walking around with more than $600,000 in his pocket, and he couldn't buy certain clothes or cars. He even had nice clothes that were gifts for completing certain missions in his own closet that he couldn't put on. It made no sense.

Even though Sleeping Dogs

is a technically successful game, it's nothing new—it only made me want to play the games it borrows from instead. I guess imitation is the sincerest form of flattery, but when it's pulled off without adding much of its own, it doesn't make for a meaningful or worthwhile play experience. Rating: 6.0 out of 10.

I liked this review and you’re right in many aspects. Sleeping Dogs does take a lot from many famous titles of the past and it is definetely true that the shops, cars, and (especially) girlfriends make no sense. But I don’t really agree of your criticism that the game felt like a been-there-done-that deal. If you sit back and think about it for a while, every new, successful game does that. It is just hard to find originality these days because most things have been done before. I still loved the review. Hopefully you’ll get an official position on the… Read more »