A Present from Uncle Joe 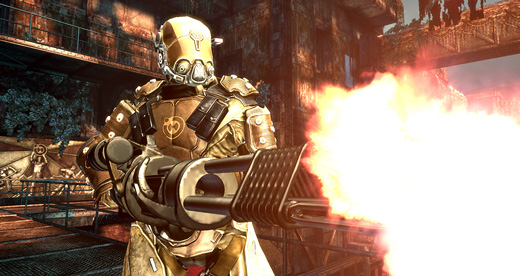 LOW Running out of oxygen because I didn't know to jam a door from the top.

WTF It's 2010, is it too much to have the Russian characters speak Russian?

, a fast-paced, time travel nightmare is a member of that family. Juxtaposing a 1950s scientific disaster against a modern "world gone wrong," it creates a brooding mood of unease that does not let up from the moment it starts.

At the beginning of the game, we are introduced to Katorga-12, a frigid island off the eastern coast of the Soviet Union. We're told that in 1955, two communist scientists experimented with "E99", an unstable fissionable element and caused a temporal disaster that left the island uninhabited. In 2010, an American military team is sent to investigate an enormous radiation spike spotted by satellite coming from the island…

Emerging from a wrecked helicopter damaged by a mysterious energy pulse, the protagonist, Captain Nathan Renko, makes his way across Katorga-12 trying to find survivors from his infiltration unit and is soon caught up in a temporal disturbance that alters his present in very stark terms. Untangling the web of alternate history will involve tampering with the past, with the help of a mysterious agent named Kathryn, and a dead scientist named Barisov, creator of the Time Manipulation Device (TMD).

The TMD is the kind of gadget I dreamt of in grade school. Like the Spider-Man web spinner, it's a techno-gadget that wraps around the wrist. The TMD can alter an object's age, fire out shock waves of temporal energy, or static spheres of frozen time. Offensively, targets can be aged to death, (a crucial tactic against some of the game's smaller swarming foes) and double-aged soldiers transform into ravening mutants who will attack your enemies, as long as you don't distract them by running. The Deadlock (the most powerful gadget in the game) can be used as a bottleneck against multiple foes, giving you time to make extra attacks or flee to safety. 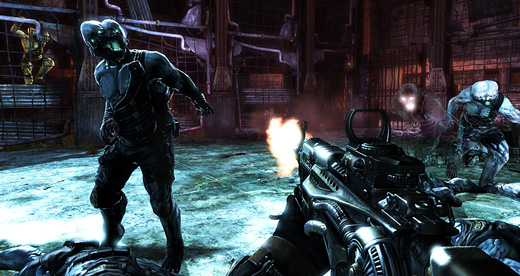 The TMD also works into the game's other mechanics, allowing players to restore depleted ammo and first aid crates, repair destroyed staircases and tape recorders, and reveal long-hidden messages. Though it's not changing typical first-person shooter (FPS) conventions, it at least lets you do something new with them. Renewing destroyed objects has a certain love/hate charm, and it's the essential selling point of Singularity for me.

Altering time on objects large and small in the game gave the island base a sense of depth and history that was critical in selling the story. Captain Renko witnesses the various incarnations of Katorga-12; the past, the present, the alternate present, the changed past. All these meta-states of the environment granted a strong continuity and believable chains of cause and effect to the action. When I saw that making a change in 1955 carried over immediately to the current situation I was facing (even though it was scripted) it still created a feeling of narrative dynamism in the game that kept me invested, and was not overused. Nor did it reach a point of unintentionally comic dogpile with too many temporal threads that a narrator needed to step in and explain.

Time travel aside, Singularity is a functional, straightforward FPS that relies more on gory action than it does on tactical thinking. There are a few segments where players are tasked with defending high ground against waves of enemies who come from several directions. The sniper rifle with its refillable bullet-time gauge or the Seeker rifle with its time bending bullets help with these more involved battles, but otherwise, Singularity is a shoot-them-in-their-face-and-don't-ask-questions affair. If the gameplay feels recycled, at least it MOVES. It doesn't waste time with exposition and cut-scenes, it just heads for its climax in gonzo fashion. It's a six-to-eight hour game that takes six to eight hours to play. No more, no less. No game stretching design. No backtracking through levels, no recycled enemies or bosses.

dark, tightly put-together and self-consistent in its retro-futuristic detail. It didn’t waste anything—especially my time. I'd classify it as a short and dirty FPS gem of 2010. Rating: 7.0 out of 10.

Disclosures: This game was obtained via retail store and reviewed on the PS3. Approximately 12 hours of play was devoted to single-player modes (completed 2 times in Easy and Standard difficulty).

A Good article. Some points I have: 1) “Renewing destroyed objects has a certain love/hate charm” I don’t understand what you mean by this. 2) Because this is a Second Opinion article and not necessarily a review, I’d personally want to hear more about what you thought about the game first, then talking about its features supporting your impressions second. — I’m glad you liked Singularity. Along with Wolfenstein, it scratched my itch for pulpy sci-fi, too. I would very much like to see more games exploit the time travel mechanic, so that by your choices different events result. Then… Read more »

@ Mark, my love/hate charm comment referred to feeling that the trick of respawning ammo and health would be a feature people will either love or hate, depending on their taste. I found it an amusing way of making something old seem fresh. Thank you for your feedback, your view of second opinion structure is something I’ll definitely incorporate next time! And I agree btw, pulpy sci-fi is not dead. I would be knocked out if someone did a Forbidden Planet follow up, for example. Plenty of fertile ground there. 😀 @JLB – yes I agree, more people should check… Read more »

Good review, very tight. Hopefully this will encourage a few more people to go out and try this fantastic little game. Still no idea how it seems to have been so over-looked, at least here in Britain.

This is what I call a solid B game, its bland enough just another AAA want to be but is quirky enough to be neat, like stalker,like cryostaisis,like Metro 2033, like dark sector.

Would love to see the ultimate russian game made mix stalker,metro and cryostasis!