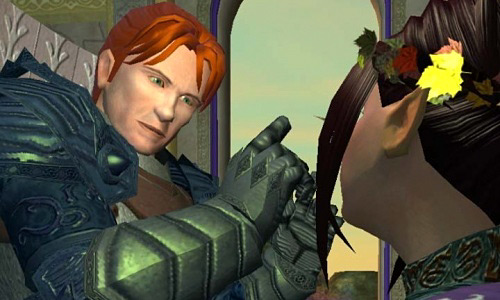 While looking at those into titles like World of Warcraft (WoW), EverQuest, Second Life, and others, MMO players' lives seem like an easy target for humor, Second Skin manages to avoid that. There are extremes shown in the film, but not all of the extremes are bad. There are of course the people who wasted their lives in an MMO, but countering that, Second Skin presents stories about lifelong friends formed via online gaming, and even new romantic relationships.

The gamers profiled in Second Skin include Andy, who moved from California to Indiana to be with his friends from WoW. Matt is one of Andy's new friends, along with Chris and Anthony. Together these guys each play a different yet distinct role in their WoW guild. In fact, they spend more time together than most friends do. Not only are they guild mates, they also are roommates and co-workers. Becca, Anthony's fiancé, rounds out the group as the voice of reason. While the others play WoW and neglect responsibilities, she seems to act as the mother of the group.

Karalee, Andy's wife, is another voice of reason. Andy must play MMOs less, as Karalee is expecting twins. Since he currently spends at least six hours every weeknight playing WoW, the shift in responsibility is a big leap for him. In a way we're seeing someone grow up for the first time. When the twins are born, Andy must come to the realization that there are other priorities in his life. He appears to be learning this as time goes by, but we're never certain. 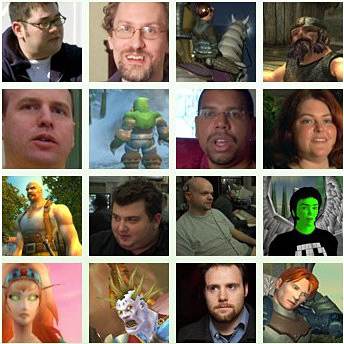 Heather and Kevin are EverQuest 2 players who met through the game and started a romantic relationship. Second Skin presents a terrific picture of what happens when the two finally meet for the first time in person. Both Heather and Kevin were in relationships with people that they had met online before, and both had relationships that failed because their partners' actual character was far different from their in-game persona. As a result, their initial meet up is a tense one, but it goes well enough that Kevin moves from Texas to Florida to live with her. Fortunately, Second Skin doesn't sugarcoat their relationship. We see them argue and ignore problems instead of solve them. As the realization of their new living situation kicks in, reality must be dealt with.

Countering the positives of the MMO genre I've mentioned is Dan, an MMO player with extremely addictive personality. He began with the original EverQuest, then moved on to EverQuest 2, and then WoW. The appeal of MMOs to him (and others mentioned in the movie) was that in an MMO, everyone starts out as an equal. When you can be the best at the game, regardless of real world physical appearance or skills, the virtual world becomes the preferred reality.

Dan recalls playing for days on end, stopping only to eat. If he had to use the bathroom and had an empty bottle handy, he would use it instead of getting up and going. Suffice it to say, he lost his business and house in the process, yet continued to play games. He sought help from Liz Woolley of Online Gamers Anonymous, who runs a halfway house for addicted gamers. He eventually overcame his addiction, but it was on his own. In fact, Dan doesn't even believe in addiction.

Briefly mentioned in Second Skin is the concept of gold farms in MMOs, and how MMOs can be used to help disabled gamers feel connected to others. Unfortunately neither one of these ideas is explored in depth, and they both feel tacked on. It's a shame too, because each of them could have been a documentary in their own right.

's strongest point is that it treats the medium of video games as it should be treated: with reverence. It presents the truth and is open about both the pros and cons of games. Can some people meet new friends and form relationships with people that they first met online? Sure, but they can also get hopelessly addicted to games. In that way Second Skin treats games as an art form worthy of praise and criticism, much like film or literature. Few documentaries are as good at presenting the facts openly and up front. Rating: 8.0 out of 10.