Save the Space-time Continuum, Because You Know You'll Wreck it Again 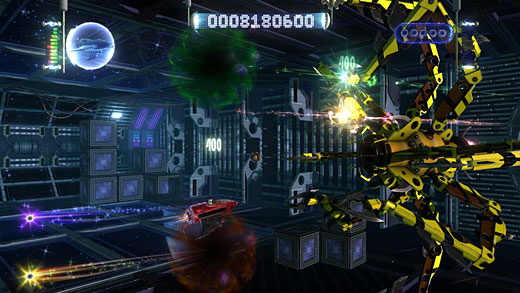 LOW Sometimes difficult to parse everything on screen.

WTF Still wrapping my mind around a backward scoring system.

It almost feels as if Retro/Grade borders on being too gimmicky. When starting the tutorial or main game, the player (as Rick Rocket) is faced with a huge boss whose weapons misfire. Releasing a few blasts, Rick soundly defeats the giant mech as the words "You Win" pop up and the space jockey rides off in a triumphant blaze.

Then the whole thing vanishes in a sucking black hole.

I am accustomed to playing unrepentant jerks in games. Despite attempts to humanize them, I have very little sympathy for Marcus Fenix, Kratos, or any number of a dozen gruff mercenary-esque figures that dot the games landscape. Rick Rocket counts among them, but the story Retro/Grade has to tell is rather brilliant in that it explains the gameplay so well. See, Rick went off on a spree of killing aliens who were being so-called nuisances; sometimes this is because he's in a bad mood, sometimes it's to get a deal on something he wants to upgrade on his ship.

Unfortunately, Rick has done his job so well that the space-time continuum collapses in on itself. So what must Rick do? Nothing. He has to undo.

Retro/Grade tasks the player with taking back every missile, laserbeam, and blast Rick has fired, while set to a chiptunes-esque beat that pairs spectacularly well as both a foot-tapping measure of rhythm and homage to the games of the past. Because of this meshing with the music, the option exists to use either the Sixaxis controller or a guitar peripheral. The game plays on colored tracks much like Guitar Hero or Rock Band, which means lots of little things that work quite well together.

The obvious first is that Rick's ship moves from right-to-left, rather than the more traditional left-to-right. However, challenges come from both directions: from the right, Rick will be grabbing back all of his weapons launched at foes, watching as the ships they blew up materialize again. From the left, Rick will be avoiding the foes' attacks, which he has already dodged at a previous point in time. Flub any of these and that whole space-time continuum thing is in danger.

Then there's the score, which counts itself backwards. Rick reached a "high score" in the journey we didn't see, and now he must undo it. The closer to 0 the better, and scoring happens based on how well missile grabs and dodging enemy fire is timed. Combo these events for an even… lower… score.

Of course, the challenge ratchets up as the game progresses (regresses?) despite the fact that Rick is moving backwards. To explain this, 24 Caret Games got rather clever. In a real war, if we can, we would theoretically take out the largest, most difficult target first. It would make the rest of the war easier. In games, due to the way they are structured to empower the player as they move forward, this is just the opposite. However, Rick took the "real life" approach by totally deciding to off the biggest problem first, so that the rest of his time he could be a bro and totes not care. It's a small touch of the meta-narrative that I appreciated.

Rick Rocket is a caricature. Retro/Grade is clever. Together these two facts helped make an enjoyable experience out of both an homage and music game that is visually stunning, aurally pleasing, and thumb challenging. Rating: 9.0 out of 10.

Disclosures: This game was obtained via publisher and reviewed on the PS3. Approximately 10 hours of play were devoted to the single-player mode, and the game was completed. There are no multiplayer modes.

Parents: According to the ESRB, this game contains mild fantasy violence. The visualizations are such that the ships you've previously blown up are becoming whole again. The implications are that Rick committed wholescale war on a galactic army.

Deaf & Hard of Hearing: Because the screen can become so visually cluttered, there is an increased reliance on the beat of the music. This may hamper attempts to play the game based on your own ability to parse what is happening on the screen. It will definitely affect score in terms of how well the timing can be completed.