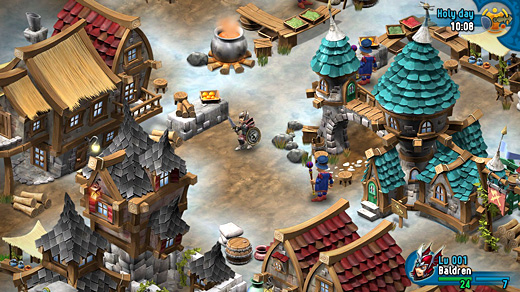 HIGH Some of the game's features are refreshingly respectful of the player's time.

LOW Virtually everything else is not.

WTF One female quest-giver explains why she wants her comb fetched: "I want to impress my gallant Gorodo, but first I have to pimp myself."

Before we can talk about Rainbow Moon, we need to talk about the MDA framework.

MDA, which is short for Mechanics-Dynamics-Aesthetics, is a model of game analysis developed by Hunicke, LeBlanc, and Zubek during the early 2000s. It describes how a game's collection of rules, algorithms, and possible inputs (Mechanics) interacts to produce behavioral or systemic outcomes (Dynamics) within the game that deliver various sensations (Aesthetics) to the player.

In plain English: MDA asks us to focus on the ways that the different pieces of a game work together to form your gaming experience. One such implication that we can draw from this model is that, on its own, a single mechanic can't convey much. It's when a mechanic collides with other moving parts in the gamespace that any sort of message truly emerges.

Now, Rainbow Moon. It's a tactical role-playing game (RPG) by SideQuest Studios, the same folks that developed the Söldner-X series of side-scrolling shoot-'em-ups. It has some impressive features that future video games should keep in mind when they grow up someday.

For example, rather than following the simplistic trope of "connect-the-dots" map traversal found in other tactical RPGs, Rainbow Moon takes a cue from the King's Bounty series and gives the party a large, continuous world map to travel. On top of that, the world runs on an accelerated day/night cycle where characters deal with hunger, and each day of the week carries a special gameplay benefit, such as improved magic damage or boosted experience points for vanquishing enemies. Thankfully, players can load and save their game at any time in this world, outside of combat.

Another interesting aspect of Rainbow Moon is its unique blend of both random encounters and avoidable, on-field enemies. The random battles in particular stand out from typical RPG fare: instead of yanking the player out of the overworld and immediately shoving them into combat, Rainbow Moon presents the player with an "invitation" prompt at the bottom of the screen. If players "accept" the invitation, they simply press the X button and jump in. Those that would rather continue exploring can ignore the prompt and the unwanted invitation will eventually slide away from the screen.

As interesting as that list of mechanics may be, the MDA model gives us a useful warning: the ultimate test is whether all of those disparate elements unite to create an interesting experience as a whole. Unfortunately, things don't come together in Rainbow Moon very well. 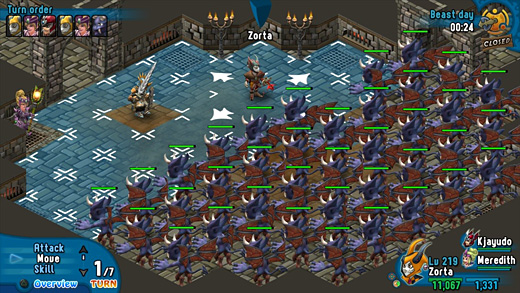 The first domino to fall is the combat AI, which is astoundingly poor. Enemies almost always beeline for a single character and will continually pass up free shots at defenseless bystanders to chip away at their pre-determined target, even if that target is defending (and reducing their damage dramatically as a result). An alarming chunk of the time in combat is spent kiting enemies around the map by running away or spamming "Defend" with a strong, targeted melee character while enemies mindlessly wail away for minimal damage.

As a result, the combat becomes punchless and predictable, making every battle feel like a foregone conclusion before it's even started. The game's marketing boasts that there are over 100 skills for characters to use, but there's hardly any point in checking them out when the tactical combat is so easily reduced into rote memorization. Additionally, the roster of enemies (which leans heavily on palette-swapping) offers so little variety that the novelty of new encounters wears off quickly.

By having such a fundamental flaw at its core, Rainbow Moon provides a very shaky foundation for the rest of its mechanical elements, and the dynamics that do emerge are hardly exciting. With combat reduced to an occasional nuisance, the game's vast overworld no longer threatens the player with any sort of danger from enemies, turning even the most intricate dungeon design into a lengthy, tiresome slog to the next plot point. While mudfooting through these interminable dungeons, all the thoughtful invitations to plunge into random encounters start to feel like spam in an inbox; something that has to be sifted through and ignored on the way to the real objective.

Once past the opening cutscene, which deftly uses silhouette art to demonstrate how the evil Namoris banishes our hero to the titular moon, the narrative immediately recedes into flavor text and nested fetch quests, serving only to fling the player from one dungeon to the next. The sparse amount of writing that remains is off-key geek humor that, sadly, occasionally veers into casual sexism: a Giant Torch item is described as being "maybe too big for girls," and one quest-giver is desperate for a comb so that she can "pimp herself" for her big and strong boyfriend.

If the storyline offered any impactful moments to connect with, then those moments could serve as a welcome respite from the laborious gameplay. But, even after over twenty-five hours of play, Rainbow Moon never once excites or surprises. There's no tension or release from the story or the combat, and the game's various combinations of Play Styles (which change the initial equipment) and Difficulty modes (Normal and Hard) only offer variations of the same emerging theme: tedium.

In the same way that Lorenz's humble butterfly steers a tornado in Texas with its wing flaps, the deficiency at the heart of Rainbow Moon's combat cascades outward into all of its surrounding mechanics, twisting them around to create an exhausting, tedious experience. Die-hard consumers that are absolutely starved for Content (with a capital C) may be willing to look past all of the problems, no matter how many empty calories are involved, but everyone else should keep the MDA model in mind and think twice before journeying down this long and winding road. Rating: 3.5 out of 10.

Disclosures: This game was obtained via publisher and reviewed on the PS3. Approximately 26 hours of play were devoted to the single-player mode, and the game was not completed. There are no multiplayer modes.

Parents: According to the ESRB this game contains alcohol references, fantasy violence, and mild language. The few occurrences of profanity occur in dialogue with characters that eventually join your party. One such character asks that you fetch a barrel of beer as provisions before he will adventure with you; this barrel remains as a consumable item in your inventory, which fills one character's hunger bar completely.

Deaf & Hard of Hearing Gamers: The reviewer did not find any required audio cues for gameplay elements at any point through their experience with the game.