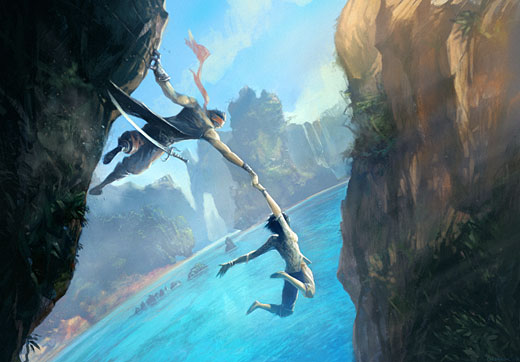 HIGH The beautiful art style and incredible palate of color.

LOW Simplistic gameplay that fails to provide a challenge.

WTF Why is Elika encumbering this game?

I absolutely love the previous incarnations of Prince of Persia. Right the way back to that awful NES port of Prince of Persia 2, I’ve always felt that the series has defined some of the very core mechanics of platforming by subtly adapting sequels to suit different generations. The Sands of Time, for example, drew upon the ever-changing nature of gaming and incorporated more visceral and engaging combat to suit different audiences, but yet it still retained that sense of boundless platforming and wondrous animation that I have come to love about the series as a whole. After playing the new title (aptly named Prince of Persia) I can say that fans of the series will not be disappointed too much. It has indeed undergone nothing short of a dramatic overhaul and this will not please everyone, but Prince of Persia is a generational experience that mixes old and new to create a captivating, if substantially flawed, gem of a game.

Prince of Persia puts players in control of the lovable Prince himself. The story draws upon the archaic mythology of Persia, and as a result, comes out rather convoluted and pretty standard fair. After some tomfoolery in tracking down his donkey, the Prince stumbles across the enchanting Elika, who soon leads the Prince into all sorts of trouble. A quick background digression and fatal mistake by Elika’s father later, and it is up to you and your new sidekick/love interest to restore corrupted lands and save the world from the dark god known as Ahriman. Throw in some tidbits of information cobbled together about a Tree of Light and there is a loose, patchy story that was enough to keep me mildly entertained for a while. Still, despite its patchiness the narrative served to make sense of what I was doing whilst playing. Not only that, but I thoroughly enjoyed the quick-witted dialogue and the light-comic relief provided by the Prince, which endeared me into the story further. Elika is also a pleasant new addition to the series from a narrative standpoint, but provided me with some serious issues from a gameplay perspective. More on that later. 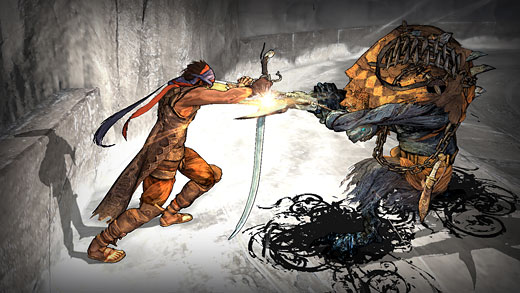 The biggest fundamental change to the series is the general art direction. Make no mistake, mind; for whatever flaws the narrative has, Prince of Persia makes up for them through appearance. It is a stunning game to look at. It catapults the creativeness of the mind and the power of the next generation of consoles to create something so truly special and so stunningly beautiful. But Prince of Persia is more than just a visual feast to the eyes. The picturesque setting drew me into the game instantly, and the lavish cell-shading (particularly the transition from darkness to light when restoring corrupted areas) is unbelievable. The jarring and uncompromising score used for corrupted areas juxtaposed with the soothing instrumental sounds used when I ousted the darkness provided an enthralling backdrop. I often wanted to progress through the story for the single aim of being able to appreciate the artistry and effort that has gone into making Prince of Persia such a beautiful game.

In a game such as this, it is obvious that platforming is everything. Without a truly intuitive mechanic, Prince of Persia would inevitably fail to deliver on its legacy of fun platforming. Thankfully, this incarnation passes with mostly flying colours. Unlike Ubisoft’s previous platforming escapade, Assassin's Creed, Prince of Persia does not strive for ultra-realism and complex animations when controlling the Prince, and instead provides seamless transition when climbing or jumping from one area to another. Thanks to the simplistic control scheme, it truly is "poetry in motion." I did feel, however, rather passive in my exploration with the Prince. Unlike Assassins Creed, one never feels fully in control of the character, and I often felt more like a shoddy puppeteer pulling on one string whilst the game did the rest for me. It certainly makes the game far more accessible to a casual gamer, but for me it took away from the intricate control of the series.

Combat also suffers from this same problem of being over-simplified to suit any gamer. Combos can be pulled off easily and the gamer can string together some rather impressive looking moves, but often these will be timed considerably slower than usual. As a result, even the most uncoordinated gamer can look like a seasoned pro when playing. Likewise, the battles themselves are only ever against a single enemy, which, apart from making combat incredibly easy, also makes it repetitive and dull. I can fully understand Ubisoft’s reasoning for simplifying the combat, but whilst the previous titles did an excellent job of making gamers feel a sense of accomplishment when they defeated a couple of enemies, Prince of Persia becomes a sort of anti-climax in battle. Whereas a game such as God of War provides gamers with visceral and brutally satisfying combat, and Assassin's Creed provides neat, intricate fencing, Prince of Persia provides a weak hybrid of the two and doesn’t deliver an engaging combat system. 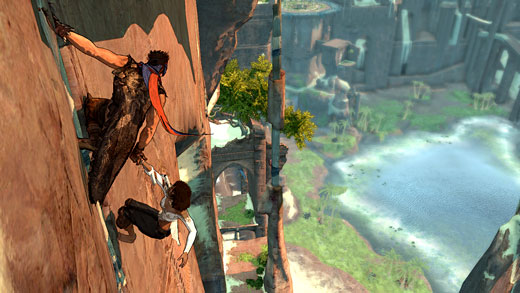 We then come to the inclusion of the Prince’s companion, Elika. She is certainly a very useful addition to the series, and her ability to lead the gamer to different areas when lost is extremely handy, but the character destroys any type of challenge at all. If the gamer plummets down a cliff, instead of actually dying, they are merely hoisted back up to the nearest point by Elika. In combat, the Prince cannot be killed as Elika will save him time and time again. It was so profoundly irritating to me to know that if I simply stood still during a boss fight, I could never actually be killed. In the final fights, I wanted to feel the need to conserve my attacks and limit my enthusiasm for taking out the boss in fear of being killed and having to start again. I wanted to feel as though one wrong button press could be my undoing, and instead, all I felt was the trudging of the X button as I hacked away without a care for the character. Ninja Gaiden, for all of its soul-detroying boss fights, knew exactly how to make a gamer feel proud and worthy once they had defeated a boss. Suffice to say, Prince of Persia does not. Further still, there is no difficulty option included, which baffled me and will likely baffle other gamers seeking an actual challenge.

This issue with combat and Elika raises the single greatest issue I have with Prince of Persia: the accessibility. It is too easy and far too repetitive as a result. Essentially, the player travels from area to area solving rather tedious puzzles until coming up against a mini-boss. Once the player has restored an area, she can either choose to collect orbs (which unlock new areas) or wash, rinse and repeat until the game is completed. The stages themselves are nicely designed and have a number of routes through them, but often felt needlessly expansive and a waste of resources that could have been spent tightening up the combat mechanics. I often felt incredibly frustrated that there was never a digression into a side-quest, or even proper collectibles, as these could have done wonders to hold my interest further. Elika's abilities, although handy from time to time, eliminated any sense of accomplishment I felt once I had defeated the final boss.

All in all, I enjoyed my play through of Prince of Persia, but by the end I couldn’t help but feel that the series's evolution has come at a significant cost. The game's core mechanics are all still there, neatly created and presented stunningly. But underneath this evident beauty, Prince of Persia fails to deliver on any sort of a challenge, and instead of carrying on the proud tradition of the series, deviates to a considerable and damaging extent because of its simple gameplay and excessive accessibility. Rating: 7.0 out of 10

Disclosures: This game was obtained via retail and reviewed on the Xbox 360. Approximately 12 hours of play was devoted to single-player mode (completed 1 time).

Parents: According to the ESRB, this game contains Alcohol Reference, Mild Language, Mild Suggestive Themes, Violence. I'd say that the game is certainly unsuitable for young children, but the language, violence and themes won't trouble any other age groups.

Deaf & Hard of Hearing: All dialogue is subtitled without need to select the option from the option menus.

Personally I loved Elika…except for in combat. She made traversing the obstacle sets a lot easier by not forcing me to reload the game or something pesky like that and thus removed a lot of unnecessary frustration from the process. Bioshock did this as well, although not quite as successfully.

Combat could’ve been a lot better though-the enemy should get their full health back when you are beaten.

While it indeed has some problems, I felt that the successes overshadowed the failures to a large degree.

What i think seems to be odd is everyone claiming prince of persia to be so stunning. Sure, the graphics are extremelly solid but there is no difference in look to the different areas at all. Just some are indoors, some ourdoors an some are buildings. The lighting is the only thing that changes. Healed, the lands are all the same bland brown and have no destinctive difference other than the odd prop. And everything has grass growing from it, Even rock. Oh an the hideous pads that launch you around the game… what a lazy way to get you… Read more »

As gamers, we often get caught up in the terminology and rely on them without putting much consideration on the actual meaning. What does it mean to be in a state of “platforming?”

I also hadn’t considered how well Prince of Persia as adapted fairly well over the console generations so thank you for that. What do you consider to be your favorite PoP game?