Making a Toy Out of US Politics—Just like Real Life! 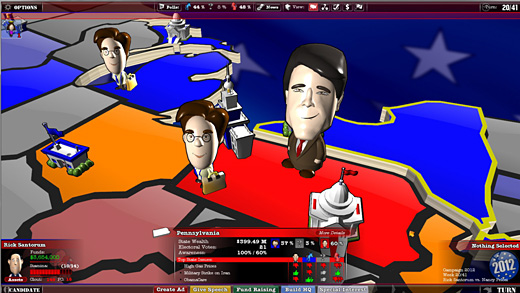 LOW Increases my cynicism of the electoral college as a system.

While I wouldn't say that I enjoy politics, I wouldn't hesitate to state I'm engaged in them. For the first few hours, that was also my experience with Political Machine 2012.

Not having played the previous two versions of the Political Machine franchise, I found myself curious as to how it would all play out. Largely, it feels like the game I was presented was more like a toy, complete with bobble head representations of the candidates running for president. It somewhat mimics, but never gets close to any true emulation of the political campaigns we see unfurling before us.

The candidate chosen starts with a certain amount of wealth depending on the stat in that attribute. They then go around the 50 states giving speeches, fundraising, dropping ads, or building new headquarters. Each turn there's a cap on the candidate's stamina, meaning actions must be prioritized. Run low on cash? Better build a campaign headquarters to earn some more. Want to buy clout with a political group? There's a headquarters for that as well. Maybe you want to buy a media team, a bully, or wordsmith to help you out? Sure enough, another headquarters.

Much of the beginning is raising the candidate's awareness in a given state, which is odd, since a state that might have a low awareness of an incumbent president seems a willfully ignorant one. Of course, having awareness is only part of the battle, and one that largely becomes meaningless if the candidate continues running around the nation and sponsors TV ads everywhere.

My first play session happened to be Hillary Clinton and Michelle Obama versus Condoleeza Rice and Sarah Palin, going through the Easy mode just to get a sense of the game. While amused at the heads (literally) bobbling, the politics are largely inconsequential. I quickly grew tired of the absurd positions I found myself taking just because I could. For instance, I could go to Florida and be against same-sex marriage to gather popularity, then go to California and be for it; I discerned no real penalty for doing such. 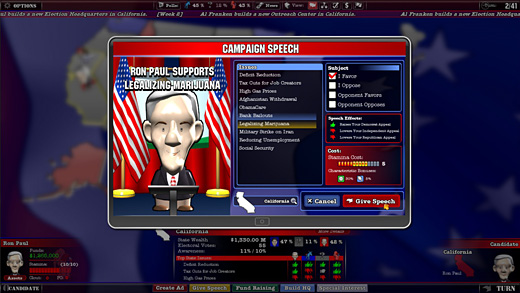 The lightweight nature of the game made me glad I could set a session's length to a short time span: my current game of Obama against Romney, while shorter than even a short session of most strategy games, finds me wishing it was over already, just as I'm sure I'll be wishing the real election will be over when political ads flood my every waking media consuming moment.

Once the initial base-setting is done and awareness is raised in all states, I felt I was repeating the same actions over and over to get the electoral college on my side. It became grinding. Even a lengthier game is going to take only a handful of hours, but the lack of any real interruption or upsets means it's a fairly steady trudge and trod that never manages to go much of anywhere.

Further aggravating is that the entire map of the US is eventually flooded with ads, political headquarters, and political allies who each have their own markers and symbols. This makes it almost impossible to tell what's happening in a distinct manner. What typically starts as me being on point concerning deficits and unemployment eventually turns to dirty politics, and switching positions in a state while flooding it with icons, as if it would help me win its electoral college votes. Because the way to visually distinguish between the icons of your candidates and their opponent is a slight color shift, this requires a lot of tedious zooming in and out to see what you have there, as opposed to what they have.

There is a desire to want to see this game as a cynical swipe at politics, their campaigns, and how the two-party system has created a constant stalemate. It may well be a point worth making: anyone playing this as either their ideological match or the opposite will find that ultimately there is opposition and favor, without much nuance. What has been created is an echo chamber that rattles back and forth, with people clamoring for one side or another, but not giving room for greater discussion.

However, this is also odd in that the game seems to eschew the internet in all its forms. As a spark for constant and embittered debate, having candidates deal with the internet and social media would likely add a depth to just the strategy that seems a missed opportunity. Despite the game being set in 2012, the ads I could create were stuck with me advertising in newspapers, the radio, and television. It's a strangely anachronistic touch that makes the entire thing even more like a toy that was made eight years ago, with the only change being the player figures included in the set.

Ultimately it all feels a bit hollow. There are no surprise events or bits of information that require any reaction, and games tend to go through their various phases. This creates a loop that makes Political Machine largely uninteresting in the long run. As a toy to create Grace Jones, president of the United States of America, it's great fun. As a game that tests my strategic depth, I found it a bit lacking. Rating: 3.5 out of 10.

Parents: This game is not rated by the ESRB.  It contains everything you'd expect from political campaigns engaged in propaganda and mudslinging, so keep your kids far, far away!

Deaf & Hard of Hearing Gamers: The entire game can be played on mute without being detrimental to the experience.