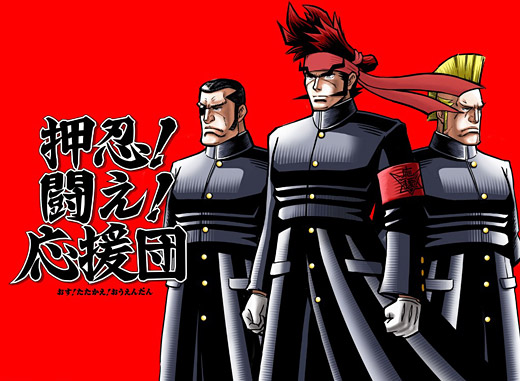 HIGH Hearing my Japanese host mother comment "kawaii!!" after I showed her a level of the game.

LOW Almost doubling the amount of scratches on my touch-screen due to excessive and forceful spinning.

WTF The instance where the Ouendan somehow manage to travel back in time… When Japanese male cheerleaders start inexplicably using time travel to help a distressed Cleopatra, I laugh.

I recently experienced my first trip overseas, to a humble little country called Japan, and, though I was satisfied in some ways, in many others my disappointment was palpable. All the reports I've been given of the Land of the Rising Sun thus far have indicated a country of infectious madness, where the most popular television show focuses on live beetle-wrestling and where the English is always hilariously mistranslated. Alas, it appears I was duped, as it was normality, not beetle-wresting, that reigned supreme. By the end of my trip, I had just about resigned myself to the sad fact that Japan is merely another modern country, but them I stumbled upon a wonderful souvenir at the local game shop: Osu! Tatakae! Ouendan!

In Ouendan, I have found my own little piece of infectious Japanese insanity, to be taken with me wherever I wish. The basic concept of the game runs as follows: The Ouendan ("cheersquad" in English) are a group of serious and stylish aiders of humanity. Whenever downtrodden citizens find themselves in a situation beyond the limits of what they can bear, they shout "OUENDAAAAN!" at the top of their lungs. In response, three burly men dressed in black trench coats arrive on the scene, the renowned Ouendan. Armed with cheer routines and a catchy J-Pop soundtrack, their job is to use their cheering prowess to motivate these poor citizens to success and better fortunes, whilst the player's is to enjoy funky touch-screen rhythm action in conjunction with such ridiculousness.

This set-up is a bit odd (who are these strange, coated men, and why are they dancing?) but, gosh darn it, it's infectious. In comparison to the lifeless locales of other rhythm-action games, Ouendan’s presentation shines like a supernova of enthusiasm and encouragement. Each of Ouendan's songs boasts a 2D-animated story based on a unique character's plight, which progresses on the top screen whilst the actual game is played (and the Ouendan cheer enthusiastically) on the touch screen. It's a fine formula, and one that has quite a bit of staying power if the popularity of the game's equivalent in the West, Elite Beat Agents, and the quick release of Ouendan 2 are anything to go by. 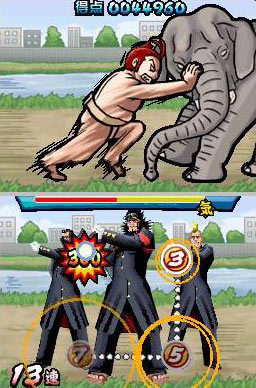 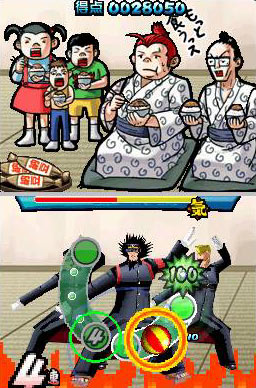 The fact that the game is in Japanese (a language I have only just begun to learn) has not detracted from its goodness in any way. All of the scenarios are easily understood on the basis of the storyboards alone, and if anything, the stylised Japanese fonts and emboldened onomatopoeia only serve to heighten Ouendan's energetic craziness, which in turn heightens the player's passion for the game. After all, who needs more motivation to rhythmically tap circles than the prospect of helping strange men in black cheer on a member of the Japanese workforce so that he can win a battle against giant, Godzilla-esque rat? The foreign sentences flashing all over the place are just the icing on the cake.

Whilst it is very easy to get swept away by Ouendan’s charm, behind all the razzle-dazzle lies a simple, albeit fun, rhythm-action game. The game presents the player with three different actions: tapping circles to a proper rhythm, dragging circles to a proper rhythm, and zealously spinning giant spinners to no rhythm (unless I were to refer to the sounds of my wrist breaking as "rhythm"). Performing an action too early or too late or failing to fill up a spinning meter brings a "Game Over" ever so much closer, whilst stringing together successful combos keeps the everything high and dry. Survive for the duration of an entire song and victory is yours. It's a simple set-up, but an effective one.

The basic mechanics of Osu! Tatakae! Ouendan are near perfect. Whilst the spinner action is gimmicky and unnecessary, and caused severe pain both to my hand and to my DS screen, it is fortunately but a minor hiccup. The game's idea is pure, the stylus is a great interface method and the rhythms all coincide well with their respective songs. Each tap leads smoothly to the next and, to top everything off, the game is genuinely addictive. I was also very impressed by the way the developers managed to effortlessly display rests in rhythms, by way of strategically spacing hit boxes further or closer to each other, depending on how much time lies between them. A nice touch. 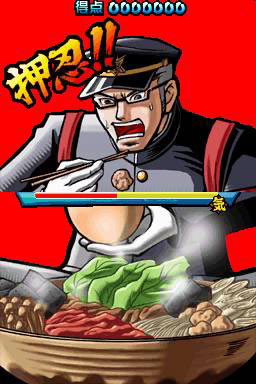 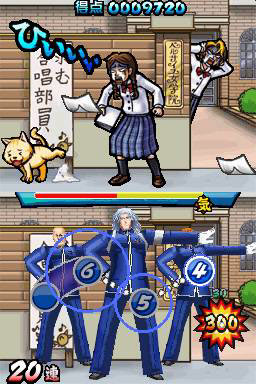 It also doesn't hurt that the game's soundtrack is wonderfully catchy and very well-chosen. Each of Osu! Tatakae! Ouendan’s 15 songs come from the inviting musical genre of Japanese Rock/Pop, wherein, if this game is anything to go by, every song is required by law to have an awesome melody and an insanely catchy chorus. Whilst most of the tunes all carry the same upbeat, guitar-driven sound, there are a few exceptions that do add that little bit of variety to the proceedings, in particular the game's signature love song, "OVER THE DISTANCE" and its final, most difficult piece, the epic "READY STEADY GO". The sound quality is great, the beats are pumping and the harmonies are lovely. I never thought my scratched, mutilated first-generation DS could rock this hard, but Ouendan has made it so.

I think by now it would seem that I am quite taken by this little game, and I am. Indeed, I would very much have liked to declare the game to be an undisputed handheld rhythm-action masterpiece, if it weren't for one major oversight on the part of its creators: there's simply not enough of it. 15 songs across four difficulty levels is all the game offers, and for me, this was just not enough to prevent repetition and, occasionally, boredom. There is no training mode, nor is there a music gallery, (I can't even count the number of times I've wished to hear the songs by themselves) and, on top of this, there is absolutely nothing to unlock. True, not all games need unlockable doodads to be of a good quality, but after conquering the final level of the game (a feat that might be referred to as "insanely difficult" by some) and receiving nothing in return, I knew that a little part of my soul had died forever.

So, as a full game, Ouendan is substantially lacking. Now that this is noted and acknowledged, I may now impart my final, most significant message; it's also maddeningly addictive. There have been far too many mornings that have begun with "OK, just a few songs before breakfast," and an even greater amount of nights where playing Ouendan has spontaneously become more important than sleep. Whilst I've never considered it to be brilliant, genius or any other superlatives I use to make wasting my time seem like appreciating art, there's something in Ouendan that twitches me to pick it up again and again. Even though the initial zaniness has lost its pull, the challenge of the harder difficulty levels and the satisfying feeling of completing songs perfectly has kept me compelled for a far greater amount of time than I could ever have expected from what I originally thought to be merely a "play-and-discard" piece of software.

And so it is that, a full month and a half after my returning from Japan, whilst my other Japanese souvenirs sit dejectedly on my shelf, pitiable figures beckoning dust, I still play Ouendan daily. It is a quality game, there's no doubt about it, not to mention a great treat to show one's friends. A few more modes and songs would have made the game a much richer experience overall, but ultimately, when a game is fun, addictive and well-made, someone must sing its praises, and I seize this role eagerly. Not only is Ouendan a lovely little souvenir, it's also an example of just how much fun a rhythm game can be and the newly-proclaimed pride and joy of my DS collection. All together now: OSU! TATAKAE! OUENDAAAAAN! Rating: 8.5 out of 10

Disclosures: This game was purchased via retail in Sapporo, Japan, and played for an estimated time of 18-20 hours to the completion of the single player mode.

Parents: The content of Ouendan is suitable for all age groups. It features no violence nor sexual references, and is consistently bright and cheerful throughout. Having never been released outside of Japan, the game has not received an ESRB rating, but its Western equivalent, Elite Beat Agents, carries an E10+. According to the ESRB, this game contains Cartoon Violence, Crude Humor, Lyrics, Suggestive Themes.

Deaf & Hard of Hearing: Being a rhythm-action game, music is an integral part of the experience, and so, for the game to played and enjoyed properly, sound is required for all points during gameplay. The game offers no subtitles for lyrics, nor does it offer any visual indication for the music beyond each level's hit boxes.

borrowing this from you next week

This is one of the best games ever made. Ridiculously addictive, very creative yet simple gameplay, catchy songs, and insanely fun. I didn’t stop until I got all S rankings… and then I still pick it up now and then. The American remake, Elite Beat Agents isn’t quite as good and neither is Ouendan 2 – but not quite as good translates to “freakin’ excellent.” The games are all just so freakin’ HAPPY, and honestly it’s not often games induce that sort of state of pure happiness anymore. Just plain brilliant stuff that really would only work on the DS.… Read more »