Legloas Orcs are an Image Forever Seared into My Brain 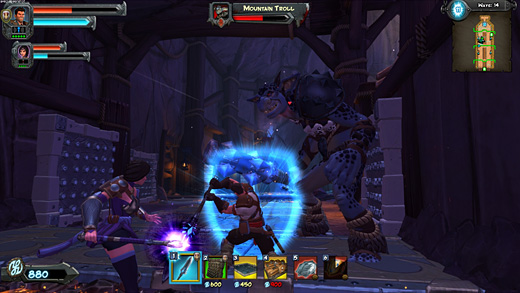 HIGH A perfect kill that results in massive chain combos of screaming orcs.

WTF With all the running the sorceress does, that much sideboob and lack of support is hazardous.

I never finished the first Orcs Must Die! because somewhere toward the end, the difficulty spiked to a degree that no longer interested me. When good ol' orc splattering, acid-melting, and face-burning turned into watching YouTube videos to learn new strategies, it just became a chore. Orcs Must Die! 2 still offers odd difficulty spikes, but gives players more robust ways of dealing with them.

The first way is the character choice between Warmage and Sorceress; the trap overlap is quite large, but there are some fundamental core differences. That lovely tar trap? Warmage only. The sorceress instead gets a trap that freezes enemies, recharges, then freezes them again. Not as consistently useful, but it'll do. The sorceress's strength instead lies in her ability to charm enemies, then killing them for big explosions. The Warmage, predictably, just shoots things and watches them explode. The brute!

Beyond character selection, the game is bolstered by the fact that players can retry a level and no longer feel like they’re just treading old ground since each level can help earn skulls (the game's currency for upgrading traps and purchasing new ones). This allows for a fair amount of replay value. For instance, I found myself going back to a level where I'd only achieved 4/5 skulls and replayed to receive 9 skulls total.

Apart from the new character, improved reward for replay, and free respecs for traps and upgrades, Robot Entertainment has gone the route of making everything bigger. Given the humorous bent of the entire game (complete with Surprise Twists) this works to create an action-tense, but tonally-amusing lesson in learning the anatomy of an orc as vats of acid spill over their carcasses, revealing the skeletons underneath that green skin.

All of this is a definite improvement over the first game, as Kristin indicated in her main review. If I had a quibble it would be that I attempted the entire campaign solo, and found that two-thirds of the way through, the level design had shifted to a focus on co-op—cue my sorceress running around constantly, charging up her wand, setting up barricades, and trying to keep sappers at bay. Given that she looks like she lacks the proper support in the chestal region, I was quite concerned with what the ragdoll physics engine might result in next.

My time with co-op was spent in the endless mode, where wave after wave of increasingly difficult enemies pour through the gates and into the maws of whatever traps are laid. I was amused at how it limited my trap selection (though the net positive of how many traps/weapons/trinkets we could have was up two), and this therefore meant a lot of strategizing with my partner. Of course, there are always those moments when something goes wrong and trouble-shooting occurs on the fly. With a friend in the game, those moments actually become more entertaining.

As I said earlier, I never finished Orcs Must Die! While there exists a desire to go back to it and finally clear out those last handful of levels, the sequel has done such a good job at both improving and fixing the first game, the thought of going back now almost seems like walking directly into the path of a fire ogre ready to stun-lock me into submission.