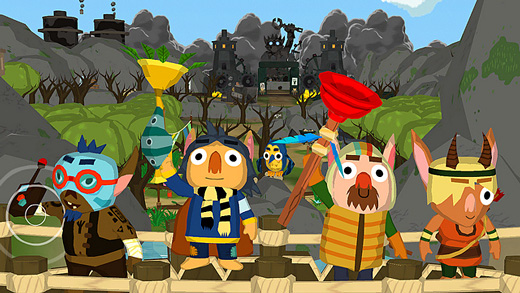 LOW Getting caught in terrain geometry despite being a flying creature.

WTF Were my characters just referred to as the "Insane Cloud Posse" just now?

Let's get this out of the way: Okabu is freakin' adorable, no matter what demographic you claim.

Hand Circus's PSN-exclusive puzzler looks like a cross between Katamari Damacy, World of Golden Eggs and some inspiration from those childhood books by Eric Carle. The aesthetic created by both the visuals and soundtrack is succinct and fantastically so; much of the reason I pressed through the game was the result of feeling immersed in this zany, super-stylized world. With so many games looking to grab gamers with photo-realistic graphics or unashamed anime art direction, Okabu pulls off every on-screen moment of eye candy.

The art style invites a spectrum of players, enjoyable to children and adults alike. They also prime the player for a certain experience, one that involves head-bobbing to electronic tribal-esque music and randomly zooming across the landscape. Okabu looks like a game for kids with the smooth controls of one for more mature gamers. It's a game a player wouldn't feel too embarrassed about when someone walks in on—they'll mostly like be curious as to what all the spectacle is about.

The developers brought together their ideas by making Okabu's environment the puzzle; there is little abstraction and every skill learned has a direct application. Players control cloud-whales (one with a whaling hat, ironically) that can absorb water and spit food items that have an effect on the environment. Mostly, though, they serve as loyal steeds to characters with unique abilities (such as harpooning, also ironic I might add). The puzzles are straightforward and physics-based, but require a little finesse and smarts considering the wacky ways the characters solve them.

Where Okabu succeeds is implicit; described as saving "the once-peaceful lands" from an "army of industrial contraptions," the player is ready for a lecture on how to be more environmentally conscious. While there are some overt stereotypes of environmentalism such as technologically-advanced enemies or using recycling bins, the message is rather subtle. Gameplay takes precedence over any sort of moralizing, making the puzzles feel like community work without being completely drab.

Okabu seems to shoot for a younger demographic with the potential for a family-play experience as its target audience, and towards that goal, the pacing is spot-on and accessible. The physics puzzles are moderately difficult, with older players finding much to do while younger ones feel challenged. However, the game still struggles with its identity. 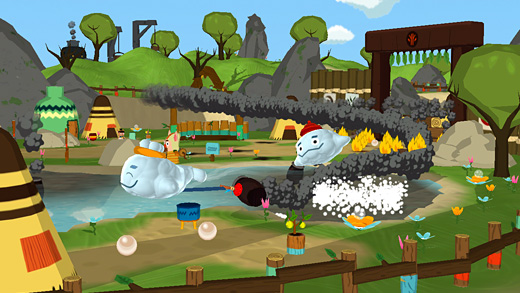 With Okabu's appeal to children and parents, including scores and leaderboards felt dissonant with the communal, cooperative feel of the game. Gathering fruit that grants points and then racing to the end felt like a competitive ploy taken from a triple-A game and inserted where it didn't belong. Including a timer doesn't promote any ingenuity when solving the puzzles.

Another issue is that Okabu's mechanics encourage the player to think multiple steps ahead using their character's abilities, but strangely, there are often arrows to follow and text that outline what needs to be done. A particular level comes to mind where the player saves a village and proceeds to clean it up using tactics familiarized in previous levels. Instead of empowering the player to figure everything out on their own, the game blocks action until a villager triggers pre-scripted events. Spots like this could have been a powerful moment where the player synthesizes all of the lessons learned beforehand, but Okabu shies away from asking them to use their grey matter.

The merging of single player and co-op into one mode also throws off the balance in Okabu. It isn't difficult to run through the game alone, and there isn't any change to levels when someone joins in. Some points are easier with a partner, but they're simply 'less annoying' rather than requiring two-player-specific strategies. Two competent players in co-op is also redundant and sometimes a drawback as there isn't enough to do simultaneously to keep the pace going. The co-op seems designed for an older player guiding younger one, which is a great way for an adult and child to play. However, not all other combinations benefit from this setup, and Okabu seems like a single-player game that could-have-been.

It's worth noting that small bugs and a lack of options or any sort of menu made Okabu difficult to get through at times. The elimination of interface and customization makes the game seem more approachable, but something as simple as a manual save isn't available. During my playtime, the cloud-whales often caught onto terrain, and more than once glitched through objects. In a game that forces a restart of the entire level instead of saving your progress with checkpoints, this is extremely frustrating.

Okabu is a game that begs to be liked, and it deserves recognition for taking risks in a family vein; few games manage to be fun for children yet still accessible to adults. As a bonus, the environmentalist angle isn't in conflict with the gameplay, but is instead used effectively to add context to the players' actions. However, it's a shame that the balance seems off and that minor technical issues exist—these things make it hard not to be ripped out of the beautifully crafted world. Rating: 6.0 out of 10.

Disclosures: This game was obtained via publisher and reviewed on the PS3. Approximately 6 hours of play were devoted to the single-player mode, and the game was completed. A half-hour was spent in multiplayer mode.

Parents: According to the ESRB, this game contains mild fantasy violence. Limited to destroying robots, knocking down enemies, and blowing up explosives. It's rated E for everyone, though, so have no fear.

Deaf & Hard of Hearing: All instructions are visual signs or in text, and no gameplay requires audio cues.