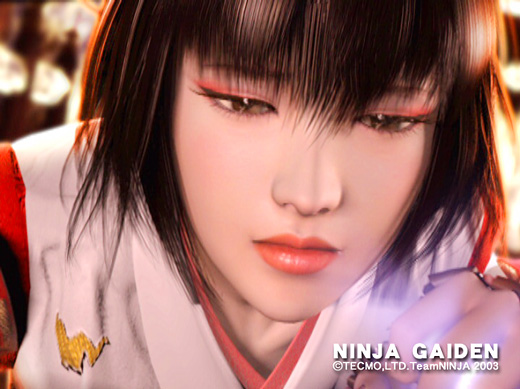 Ninja Gaiden has become some strange sort of initiation rite for self-proclaimed hardcore gamers. "You don't like it? You're simply not good at it!" seems to be the tagline. While that might be true in some cases, it's also a very annoying rhetorical trick to turn every criticism of the game into a proof of the reviewers assumed wimpness. Please spare me with this argument. In my opinion, Ninja Gaiden is good, but on closer inspection, it's a flawed experience. I'll try to give you a more detailed look at some of the problems Scott already mentioned and explain why I think they partly outweigh the games obvious strengths.

What put me off first was the difficulty level. Which is not "supreme," as Scott puts it, but simply badly balanced. It all started when I was given the choice between Medium or Hard difficulty. Which is odd. The word "medium" by nature refers to something that is in the middle, yet for Team Ninja it marks one end of their scale. Why not make it Easy and Hard? That would at least make sense. But about 10 minutes into the game I understood why you can't call what I had to endure "easy." What Ninja Gaiden does to its players in its first chapters, and at several occasions later in the game, is ridiculous, to say the least.

While Murai (the tutorial's final confrontation) lops large pieces off your health bar with his unblockable grappling moves, the ninjas of the Black Spider Clan (encountered later in the game) are no competition at all by comparison, since Ryu is able to block all of their attacks. A well-balanced difficulty increases over the course of playing, always keeping me close to the limits of my abilities. It shouldn't start with giving me the impression that I stand no chance at all, and then get easier, only to repeat that pattern over and over again. Ninja Gaiden fails in this respect. And since save points are distributed haphazardly, this is even more of a problem. I'd spend an hour desperately searching for a save point, only to find a half dozen of them almost next to each other in the following level. And the confusing camera, which usually swings wildly between too much movement and none at all, only made things more frustrating. Sure, I got used to the camera over time, but there's a difference between getting used to a game's shortcomings and getting better at playing the game.

Scott also put a finger on another problem with his criticism of Ninja Gaiden's immature misogyny regarding the character design of Rachel. For me that's just one example of the unoriginal quality of the game's overall look and feel. In this regard, Rachel's breasts are just the tip of the iceberg. There is, to name a few, the Nazi-esque villain Gamov (complete with John Lennon glasses and a green trenchcoat), the nonsense-mumbling shopkeeper Muramasa, and finally Ryu Hayabusa, member of a secret order of deadly ninjas who thoroughly enjoy wearing kinky leather outfits.

Ninja Gaiden's atmosphere and setting are both a nonsensical heap of 80's fantasy-trash that is—in all of its stereotyped cheesey glory— not even charming. Ultimately this hinders player immersion, which is already challenged by a restrictive level design that kept me puzzling over why Ryu Hayabusa is able to hop from wall to wall in a narrow alleyway without breaking a sweat, but unable to jump over a three-foot-tall balustrade. Was he absent the day they taught such mundane movements in ninja school?

Still, if you're willing to see past all of its flaws, Ninja Gaiden's gameplay can be amazingly good. No doubt about it. The combat truly makes up for most of the game's shortcomings. It moves beautifully; it's fast and full of variety, even if it does feel unfair at times. And it certainly never gets boring, which is more than I can say for most games. But when it comes to a game as hyped as this one, I think it's adequate to demand excellence in more than just one regard. In the end, Ninja Gaiden is neither a milestone, nor a work of genius. It's not a great game; just a good one. There are simply too many flaws interfering with an otherwise satisfying experience.

And rest assured that people who can't be bothered to beat it are not wimps. They simply lack a certain level of masochism. Rating is 7.0 out of 10.