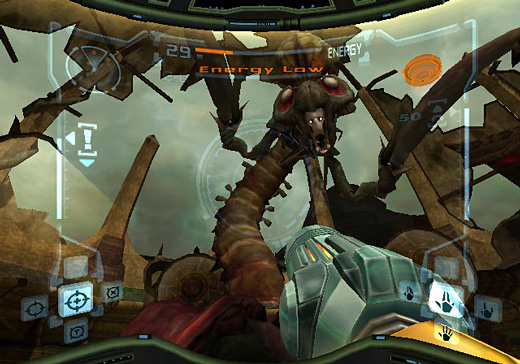 I was talking to a friend of mine the other day about how Nintendo updates their classic series into 3D. We agreed that games like Super Mario 64 and The Legend of Zelda: Ocarina of Time are light-years beyond most other games in terms of how well they are able to retain the ambiance and personality of their 2D predecessors while providing a radically new gaming experience. I was wondering what their secret was when my friend, never one to mince words, stated simply, "When Nintendo updates a franchise, they keep only the good parts," meaning, in other words, that they keep only the part that will translate well into 3D while dumping everything else. I thought this put things in perspective quite nicely. Other titles, ones that have attempted to retain the "essence" of their franchise by reproducing all gameplay elements directly, have not faired nearly as well. Even well-made remakes like Contra and Shinobi do little more than recycle elements from their 2D days expect with nicer graphics. Nintendo, on the other hand, seems to employ designers who understand that the essence of a game is not the sum of its parts, but rather the aura created by the underlying philosophy that its gameplay is based on.

True to form, this understanding can be keenly felt through every moment of Metroid Prime, Nintendo's brilliant update of their classic franchise and best game available for the GameCube to date. Developed locally by Retro Studios with only minimal input from Nintendo of Japan, Metroid Prime is a shining example of how a classic videogame series can be vividly reborn. While taking an enormous amount of liberties with the original concept, it manages to zero-in on the spirit of the Metroid series and hit a resounding bull's-eye. And that's not all. The other traditions in gaming it explores are strikingly rich, making it both an excellent installment in the series and a wonderful example of smart game design on several levels.

For those unfamiliar with the Metroid series the set-up for Metroid Prime may need a little explaining. Although it is the 5th game in the series, chronologically it actually takes place almost immediately after the original Metroid (NES 1986.) Once again the player assumes the role of interstellar bounty-hunter Samus Aran, clad in a seriously funky combat suit and hot on the trail of the wicked, insect-like Space Pirates (yes, "space pirates") after fighting her way through their hoards of genetically-enhanced creatures on the planet Zebes where they were doing illegal research on metroids, a mysterious alien life-form that can suck "life" out anything it touches. Metroid Prime picks up the story right where Metroid leaves off, as Samus tracks the fleeing space pirates back to their current secret base on Tallon IV where they have resumed their metroid research. The game begins as Samus boards a derelict pirate spacecraft in orbit over Tallon IV, but it isn't long before the action goes planet-side and the player has the chance to explore and uncover the secrets of the new space pirate operation as well as even darker secrets that lurk deep beneath the planet's surface. 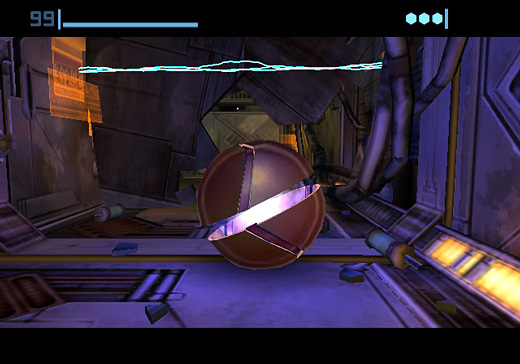 The first thing players will notice is that Metroid Prime is a first-person game. Rather than convert Metroid's traditional side-scrolling action to third-person like most games that move to 3D, Prime makes the controversial choice of moving the series into what at first looks like the FPS (first-person shooter) genre. The player sees the world through Samus' suit-visor and interacts with it mostly via her arm-cannon which extends forward in the player's view. The similarities between Metroid Prime and games like Quake or Unreal stop there, however. Unlike most FPS which emphasize furious action, Prime sticks true to its roots by squarely centering the game around exploration. Although there is plenty of action in the game, the core experience that Prime offers is more akin to first-person sci-fi classics like System Shock or Azreal's Tear.

The pace is methodical, and there is a powerful sense of wonder and terror as the player navigates Tallon IV in search of items, places, and paths that will bring her closer to unraveling its mysteries. The control scheme has been specially designed to support this, further cementing Prime's unique appeal. Shunning the standard FPS control scheme, Retro has utilized the GameCube controller in a way that provides satisfying, responsive control in a first-person view while retaining the "platforming" feel of classic Metroid. Actions such as aiming, dodging, and even jumping are handled with a silky smooth elegance the likes of which I haven't experienced in a first-person game since Looking Glass's Thief. The result is an experience that has the uncanny quality of transcending its appearance to achieve the intuitive feeling of a 2D adventure game with simple ease, while still retaining all the best qualities of FPS's to enhance its more intense moments.

But the control and pacing are only part of the reason why Metroid Prime succeeds so well at engaging the player. The other, equally important part of that equation is the attention to detail. By that I do not refer to just the graphics, but the world itself in every aspect: from the portrayal of Samus within the game to the environments of Tallon IV to the backstory of the Metroid universe. All these elements have been given so much love and devotion that they immerse the player in a way no other game of the series does. For being a character who, aside from short cut-scenes, exists only as a camera-angle, Samus has an impressive amount of personality as an avatar. The stylish HUD that encircles the screen subtly reminds the player that she is navigating from within a space suit, as does the inevitable "sluggishness" of using a controller to emulate human dexterity. Details like these actually contribute to the believability of the first-person view as well as open the door for additional touches that build off the suit concept, such as the screen going static when electrical disturbances are near or, my personal favorite, being able to see Samus' face reflected in the glass of her helmet when the light hits it just right. This gives the player a powerful sense of becoming a character that I am comfortable saying hasn't been achieved in quite the same way before. 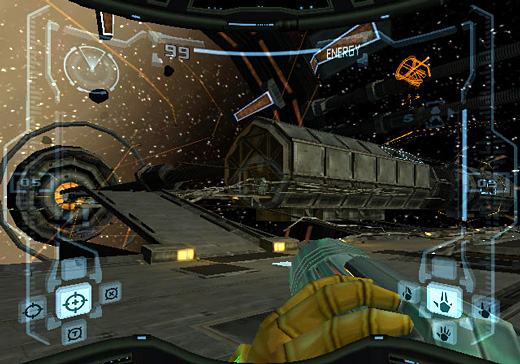 And that's just the main character. The world of Metroid Prime is brimming with as much personality thanks to the inspired "scanning" function. This small stroke of genius allows the player (via Samus' suit-visor) to analyze any creature or object in the world which all goes into a central database that the player can read at any time. This basically amounts to an endless stream of story information that is constantly and continuously enriching the already visually lavish world of the Tallon IV. All these "journal entries" are well-written and expand the game world in multiple ways. Being able to instantly examine the morphology of plants and animals gives the environment a sense of meaning and depth that augments the already skillful use of graphics and sound, and being able to translate old runes and hack into computers deepens both on the plot of the immediate game and the Metroid universe in new and interesting ways.

The reasons for Samus having her suit, the mystical abilities of the metroids, even the fact that the enemies get harder near the end of the game are all logically addressed and at least partially explained. Given the fact that Metroid has always been narratively thin at best, this all will seem terribly interesting to anyone (such as myself) who delights in seeing intelligence applied to absurd story material in ways that make it engaging in spite of its silliness. What's even more impressive is that this is all done within the fabric of the gameplay, as opposed to cut-scenes of which Prime has virtually none. The symbiosis between the narrative and gameplay in Metroid Prime is one of the reasons it stands out. Like Citadel Station in System Shock or Liberty City in Grand Theft Auto III, players will no doubt remember Tallon IV as if they've actually been there and experienced the events that take place during the game.

Metroid Prime is obviously a great Metroid game, but it's a lot more than that. It represents the best of every genre it draws from. Its combat would be enviable in any FPS. The depth of its exploration rivals even the best adventure games. And its sense of mystery and horror effortlessly does what atmosphere-driven games like Resident Evil have been claiming to do for years. In short, it is a game virtually without fault; one that succeeds admirably in everything it attempts. That's not to say it is perfect or that it could not be improved upon. On the contrary, I could easily imagine a sequel to this game building off all its strengths and enriching them even more. However, I think Metroid Prime rightfully deserves a 10 for its total escape of criticism. In terms of sheer craftsmanship, in terms of how much sense each individual design decision makes and how well those all come together into a balanced whole, I can't think of a single thing it does wrong.

Even the most obvious potential criticism of the game, the lack of a free-look function, is not something that the designers can be blamed for since including it would have meant changing the controller layout drastically which would have affected the player's ability to scan things and switch weapons on a dime, which would have affected the immediacy of both the plot and combat, etc. Since additional elements (like the slick auto-targeting function in this case) compensate for any and all potential negatives so beautifully, I cannot in good conscience consider them flaws, since doing so would dismiss the painstakingly delicate and intentional interdependency all elements of the game have with one another. The control, story, graphics, and sound are so tightly interwoven that the distinctions between them eventually dissolve, leaving behind a whole experience that is memorable above all for how simply it draws you in and how easily it keeps you there. Rating: 10 out of 10.

Parents probably won't have much problem with Metroid Prime. There is plenty of violence, but it is only against odd space creatures, and, while intense, it's never notably gory.

Fans of the original Metroid and its sequels should definitely check this out, assuming they don't have an irrational aversion to first-person games. It is easily the best, most engaging game of the series on every possible level.

Fans of Nintendo's star franchises like Mario and Zelda might also want to check this out, since it has that same sense of magic and inspiration as Miyamoto's best work.

Fans of first-person shooters might enjoy how Metroid Prime excellently incorporates elements of the genre into its own unique experience, but those looking for something along the lines of Halo or Unreal Tournament should probably stay away.

Fans of atmospheric action/adventure games like System Shock or even Resident Evil might really appreciate Prime's occasionally powerful sense of tension and fear as well as its mysterious plot.

However, it should be mentioned that Prime's main plot-twist actually depends somewhat on its sister game for GBA, Metroid Fusion. I'd recommend at least playing Fusion right before or right after Prime since the perspective it lends will make the end of Prime a lot more meaningful.