Made The Playoffs, But Lost In The First Round 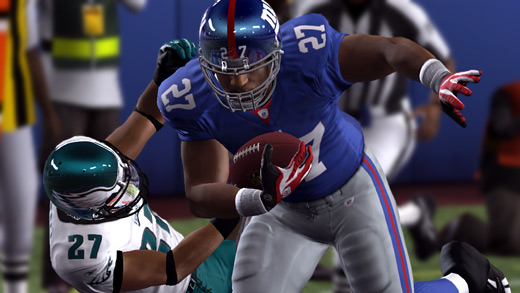 HIGH Breaking through a six man gang tackle to rush for a touchdown.

LOW Having to play the fight for the fumble mini-game when I was the only one near the ball when I fell on it.

WTF Enough with the measuring, it's clearly a first down.

Every summer for the last twenty one years, football fans have rushed to their local retailers to purchase the new edition of Madden NFL, thus making it one of the longest running and most successful video game franchises to date. But what makes Madden so appealing to fans? Sure it lets the player play football, if you call an unrealistic computer simulation "playing" football, but there are other games that offer the same experience. So what exactly makes Madden so special? Unlike many of its competitors, Madden has always stayed true to the NFL. When other titles used gimmicks and non-realistic gameplay elements to draw players in (here's looking at you, Blitz ), Madden has always maintained that authentic NFL look and feel. Madden is now the only game with rights to the NFL license, and as a result, is the only game that features real NFL teams, and the only game that can offer football fans what they crave. In the real world your average football fan stands no shot at playing professional football so the only way they can experience playing on their favorite football team is through Madden.

Unfortunately, that personal NFL experience fans so desperately crave has yet to be fully realized. Over the years the game has added more player controls and the player animations have become increasingly more realistic, but the gameplay still remained mostly computer dominated while the presentation has leaned more towards the as-seen-on-TV look rather than recreating the on the field excitement. Thankfully that all has changed this year, or at least it has begun to. In this year's edition of Madden, Madden NFL 10, it would seem that the developers at EA Sports have finally began to think about how the players experience Madden instead of just how they look at it. While the gameplay is still mostly computer controlled and the new addition of the Extra Point half-time show further intensifies the "as seen on TV" presentation style, a few new on the field additions in the form of new visual and gameplay elements allows Madden to make significant progress toward bringing that on the field excitement to its players.

In past editions of Madden, whenever the ball carrier fumbled the ball, one of the computer controlled players would fall on top of it and the play would be over. In Madden 10 however, players from both teams will pile up on top of the ball, similar to the way they do in real life football games. To simulate the struggle for control of the ball, the player is presented with a fight for the fumble mini-game featuring a string of quick button presses. While this obviously can't compare to actual people tugging for a ball at the bottom of a pile, it is the closest one could hope for in a video game without the use of virtual reality. After the mini-game is complete, the game presents the player with a quick cut-scene featuring the referee pulling players off of the pile to see which team has procession of the ball, again, just like a real life football game. 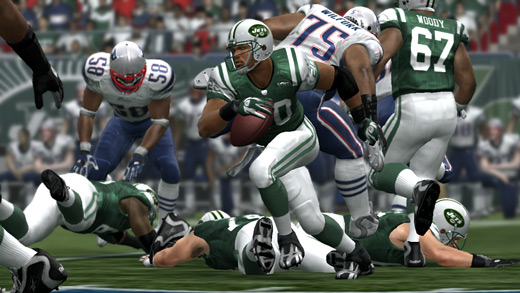 While the new fight for the fumble and referee cut-scenes are nice additions to the game, the addition of the new Pro-Tak system is unquestionably what stands out the most in Madden 10. The Pro-Tak system replicates the gang tackle element of football by having anywhere from three to nine defenders attempt to bring the ball carrier down at once. This system does an excellent job of making the player feel as though he is fighting for that first down. The instances in which the player is able to get enough of a push to break free from the wall of defenders and continue on to break off a huge gain provides that sense of accomplishment that Madden has been unable to provide its players with for a long time. To increase the effectiveness of the Pro-Tak system the game speed has been slowed down, and as a result, the player and tackle animations that largely went unnoticed in past editions now appear more frequently and adds to the impact of Pro-Tak.

Also resulting from the new game speed, the gameplay has become surprisingly more realistic. Quarterbacks now have time to elude pass rushers instead of being immediately sacked, Fullback Dive is no longer a way to gain a cheap first down, and defenders now have time to play the deep ball more effectively. Yes, the deep ball. What used to be Madden's ultimate weapon where a player could pair up any strong armed quarterback with a speedy receiver and break the game wide open on every possession has now evolved into a more realistic passing game. The deep ball is still there, but since the deep backs now have time to properly defend against it, the once meaningless ratings that represent a quarterback's accuracy and a receiver's ability to catch will actually play a role in its success.

While these new editions are a step in the right direction, Madden still has a long way to go; and nowhere is this fact more apparent than the game mode NFL Superstar. This is supposed to be the area of the game where a player could literally place themselves on an NFL football field and immerse themselves in the game. While it does allow the player to create a superstar and join the ranks of an NFL team, all of the necessary pieces that would allow the player to be drawn into the game are missing. For instance, the player will always be named the starter no matter how good the other players are at the same position, and the player's skill ratings will always increase the same amount after every season no matter how much a player practices or how badly he has played. Without the fear of losing their job or any need to participate in practice, the only thing players are presented with when playing through this game mode is lack of emotion.

Superstar mode aside, Madden NFL 10 is the best Madden to have been released on a next-gen platform. While it may not be the definitive NFL experience football fans have been craving for the past twenty years, the additions of the new fight for the fumble and Pro-Tak systems are a step in the right direction. Rating: 6.0 out of 10.

Parents: According to the ESRB, this game contains no descriptors. There is no strong language or questionable content of any kind present in this game.

Deaf & Hard of Hearing: The game offers no subtitles as there are no cut-scenes or cinematics. While the ability to play the game will be unaffected, you will miss out on the occasional gameplay tips offered by the commentators.

I’ll second the congrats–I don’t know that anyone’s done as much work on a single guest review. Glad to see it on the site.

have to give credit to you, Mike, David and Jason for the help.

Hopefully there will be more to come.

Congrats, Coyls… all your hard work and persistence paid off.