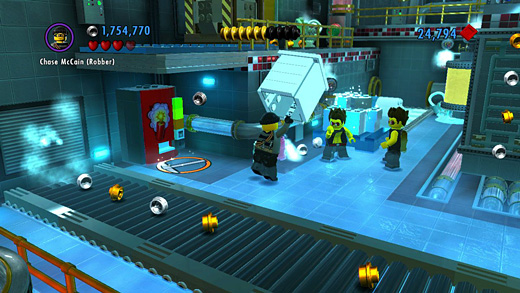 LOW Waiting for everything to actually load.

WTF Being coached by twin brothers who both sound like Arnold Schwarzenegger.

, the most recent in a long line of increasingly-ambitious games about plastic blocks and the worlds they create, is perhaps the perfect Wii U title for the gamer who doesn't mind a major dose of repetition and a kid-friendly vibe. Packed full of content to unlock and driven by a generic (but humorous) story that drags the player from one end of a city to the other and beyond, the experience frequently finds the optimal balance between freedom and structure, even though it sometimes fumbles.

Chase McCain, the story's hero, has just returned to picturesque Lego City; it's a metropolis that looks an awful lot like Hollywood's take on San Francisco. McCain mostly focuses on the capture of the recently escaped Rex Fury, a villain he once helped place behind bars. Soon he finds himself going undercover as he attempts to infiltrate a criminal network to make friends with people on both sides of the law, to protect the woman he loves, and maybe to uncover a diabolical scheme that's much bigger than anyone suspects.

Considering everyone in the story is made out of plastic, the characters in Lego City Undercover do a great job of making an impression. Snappy one-liners are common, and I was surprised by the variety of jokes. The writers also seem to be operating under the assumption that sillier is better, which means there's a lot of physical comedy for the youngsters—a mob boss stumbles down some stairs and his henchmen laugh, for instance. There's also more clever humor that I won't ruin here, and numerous films are parodied, including The Matrix and The Shawshank Redemption.

The streets and interiors of Lego City are a joy to behold, filled with high-res textures and plenty of nice effects such as reflective surfaces and water. Draw distances are quite reasonable in spite of this, and pop-up only draws attention to itself when the player is scanning the horizon in search of a distant destination. Up close, in more confined and static environments, the character models look good and animate smoothly. Chase McCain has a variety of neat moves at his disposal, which ensures that the infrequent combat remains varied enough to avoid wearing out its welcome until the end, at which point players are likely invested enough in the adventure that they'll want to see it through to its conclusion. 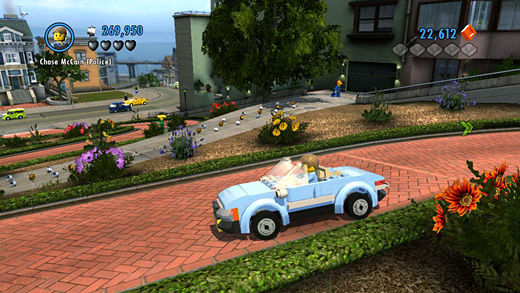 Lego City Undercover could have worked on just about any system but the Wii U is its home, meaning that a handful of special features take advantage of its very specific hardware.

The most obvious implementation is the "Communicator" device that McCain carries on his person. Using the gamepad, players can eavesdrop on conversations, receive mission updates, consult a map of the city, scan for hidden objects, and more. It feels slightly gimmicky, but the tools really do come in handy and there are only a few instances where their inclusion feels forced.

Apart from the Wii U-specific features, players will spend their time driving from one mission to the next. To complete those structured tasks, it's necessary to flip levers or bust apart pieces of the architecture and use the debris to build other items to satisfy immediate goals. The processes that serve players well in the early missions are the ones they'll rely on near game's end, which is disappointing if they're in a hurry to clear the story campaign. However, that simple design works well in small doses and should allow younger players to proceed with confidence.

Much like past Lego titles, Undercover offers a lot of optional content to keep players busy long after the 10 or 12 hours or so that it takes to clear the campaign. There are hundreds of yellow blocks to gather, usually as rewards for trouncing action stages, and hundreds of available costumes keep things interesting cosmetically. It's also possible to gather a fleet of vehicles, and to build landmarks throughout the expansive world, among other things.

The load time when a person first starts playing—and between most missions that follow—is surprisingly lengthy. Elsewhere, vehicle handling is overly touchy. That can be a problem because some missions require precision or the player is forced to restart. There are also a lot of buildings to climb, and an easily-missed handhold means Chase drops to the street and the player must try again. Some levels also require frequent switching from one costume to another, which grows tedious when there are around eight suits and the player might need to switch several times in a single minute.

In spite of its flaws, though, Lego City Undercover

offers enough variety, puzzles and comic relief that it's easy to play and enjoy for several hours in a sitting. Gathering every last trinket will require a significant time investment from players as well, which means added value for anyone who grows attached enough to Chase McCain and his friends to bother scavenging. In the end, any younger (and older) gamers looking for the freedom of a sandbox game without so much of the adult content would do well to take a trip to to Lego City. Rating: 7.5 out of 10.


Disclosures: This game was obtained via retail purchase and reviewed on the Wii U. Approximately 18 hours of play were devoted to the single-player mode, and the game was completed. There are no multiplayer modes.

Parents: According to the ESRB, this game contains cartoon violence and crude humor. There are frequent moments of peril, and references that allude to the threat of death, but the word is never used specifically and the threat typically is later revealed to be a joke (for example, one hardened criminal now "sleeps with the fishes" and it is revealed that he is the night watchman at the aquarium). Any characters that presumably perish in combat or elsewhere are made of Lego pieces and simply fall apart. R-rated films are parodied but not in a manner that is inconsistent with the game's cartoon vibe.

Deaf & Hard of Hearing: There's a lot of dialogue throughout the game, and often it's some of the best content on offer. Most of the best dialogue (including any that advances the story) is voiced and subtitled, but the subtitles don't indicate who is speaking. In some cases, speech bubbles appear over character heads to help with identification, but that's not always the case. Some dialogue also comes through the gamepad device and is displayed on the screen without additional attribution, which may cause some confusion as to who is speaking during some exchanges. Characters sometimes make remarks as the player roams the in-game world, and those remarks are not always subtitled but are merely used to provide ambient noise.