Another Visitor! Stay a While. Stay… Forever 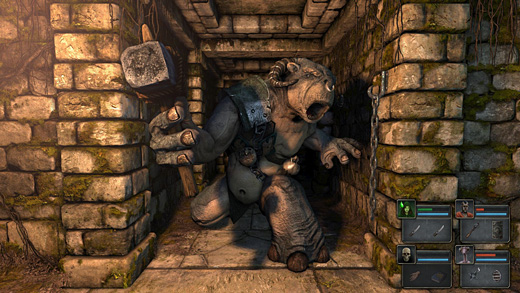 HIGH Solving an obscure puzzle in an imaginative way and being rewarded with sweet, sweet loot.

LOW The final section is more irritating than challenging.

WTF Casting advanced spells in battle requires a bizarrely intricate mouse pointer dance, and your so-called "mage" doesn't remember any of them at the start.

Ah, Almost Human. It's no longer simply a description of my own good self uttered by mindless yokels as they chase me out of town with pitchforks. It’s also the name of a small development team who've resurrected a genre that's old and fondly remembered, yet one that's clearly out of favour with the publishers of today: the grid-based dungeon crawler. Fans of titles like Eye of the Beholder and Shining the Holy Ark can breathe easy—it's a good 'un.

The story, what little there is of it, centres around a party of four who've been sentenced to death for treason. Rather than do what any sane ruler would (namely, loading the miscreants into a cannon and blasting them headfirst into a nearby wall) the King dumps them into the summit of Mount Grimrock and promises that all their crimes will be forgiven if they somehow survive the dungeon's trials and make it to the bottom, unlike the rest of the poor sods who were "pardoned" in such a manner.

Grimrock, needless to say, is not a happy place. It's cold, uncomfortable, oppressive, and it's also chock full of horrible boggle-eyed beasties that would love to tear numerous pieces of flesh out of the party with their teeth. Thankfully, these prisoners are not just any old peasants—players can choose rogues, fighters and mages from a selection of humans, lizardmen, insectoids and minotaurs to create a team that will hopefully survive the dungeon, then spend time powering them up to their liking through skill trees and stat bonuses.

Nearly everything in Grimrock revolves around the grid-based movement concept: Move in any direction and the party will move one full square, enemies will do the same and everything important that can be interacted with will exist within a single tile. It can lead to a certain awkwardness during timed events as holding the movement key even the tiniest fraction too long can lead to the party unintentionally plummeting down a hole or getting sodomized by a group of angry enemies, but it works well for the most part. 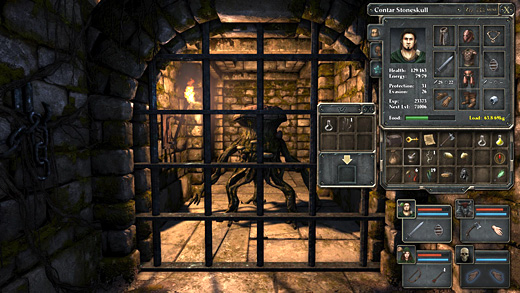 Combat occurs in real time, so learning to maneuver around this grid while avoiding attacks and slipping into advantageous positions becomes a paramount concern, as does ensuring that the group never gets cornered or backstabbed. Their formation is important—someone who can take or avoid hits will undoubtedly be more useful in the front line, whereas a character who can lob a rock into an ogre's eye from fifty paces would be well suited to the back, especially since melee attacks are impossible from that position without specific skill sets or equipment.

In general, the aim of the game is very much about survival. Starting off in little more than their underwear, the team will soon be scrabbling about looking for armour, equipment, light sources and weapons. Before long they'll also be gobbling down such sumptuous culinary delights as "Baked Maggot", "Boiled Crag Beetle" and "Sautéed Dog Ringpiece" in a bid to stave off the looming threat of starvation.

One of those items may or may not be a complete fabrication, incidentally.

Unexpectedly, Legend of Grimrock also boasts a lot of well-crafted puzzles. Many of the more complicated examples have several solutions available, the most obvious of which will simply allow progress deeper into the mountain. Other methods of completion often cough up valuable items and powerful equipment to help keep the party alive. Hidden switches litter the environment for keen-eyed players to discover, and although some of the later instances can become a bit too cryptic with some irritatingly obscure solutions at the tail end of the game, figuring out the way forward is usually an enjoyable change of pace from poking enemies up the nostril with a pointy stick.

It's a surprisingly good looking game, too. While there are a limited amount of assets, everything has been crafted with a lot of care—artistic vision proving triumphant once again over mere particle effects and polygon counts. Skeletons are suitably scabby, gates suitably rusty and freaing horrible giant crabs suitably ready to snip off penises with their pincers, the grotesque and awful little bastards that they are.

Apart from a few of the late-game puzzles and a final boss battle that cheerfully hurls itself into the "irritating pain in the arse" category, there's not really a whole lot Grimrock can be faulted for unless one simply dislikes the genre. It should probably be mentioned that Legend of Grimrock costs a mere $15 right out the gate, resulting in an exceptionally high value package that also doubles as a low barrier of entry to those poor souls weaned on modern gaming who're curious as to whether or not an old-school dungeon crawler like this one might be something that appeals to them. For me, Legend of Grimrock was an unexpected delight, and proved that old genres aren't necessarily outdated ones. Rating: 8.5 out of 10.

Disclosures: This game was obtained via paid download and reviewed on the PC. Approximately 15 hours of play were devoted to the single-player mode, and the game was completed.  There are no multiplayer modes.

Parents: This game is not rated by the ESRB, but Legend of Grimrock contains plenty of low key fantasy violence and nightmarish monsters to overcome. While we can all agree that teaching our little ones important life skills such as how to pry out an ogre's eyeball from its skull for sustenance is a good idea, younger players might find the dank and grimy dungeons found within the bowels of Grimrock to be somewhat unsettling.

Deaf & Hard of Hearing: Certain puzzles and encounters rely on audio clues to covey information to the player—a guide may very well be necessary for these gamers in order to progress.

Honestly, it shouldn’t be a problem for you to enjoy this game just because you’ve not played its type before – I feel it holds its own quite easily even without the additional nostalgia element.

Treat it as a new genre. It may not for you, but go into it with an open mind and you might love it. Or hate it. It’s worth checking out either way, there’s not much else like it right now.

Could I enjoy this game even if I am a fairly young gamer (28) that has not experienced the old titles this one was inspired by? Or, to put it differently, do I have to have played those old titles in order to enjoy this one?