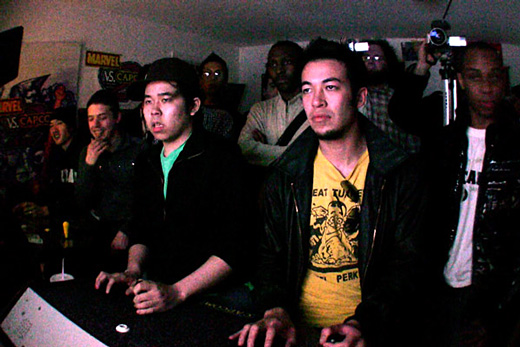 "In this country only a sucker does a 9 to 5. It's true. Real men or real men and women are on their own."

Anyone who has read my previous posts knows that I'm a fan of a well-made documentary, and I obviously like video games. When the two meet, it can create a compelling work.

King of Chinatown follows professional Street Fighter IV player Justin Wong as he competes both worldwide and in his local Chinatown arcade. In about an hour, the film features Justin and his then-manager Isaiah Triforce Johnson (his actual legal name) attempting to make Justin the best Street Fighter IV player in the world. At the same time, they try elevating Triforce's fighting guild "Empire Arcadia" to the next level. It's all but implied that Justin is the best in the guild, and Empire Arcadia's success depends largely on his individual success. The more attention he can bring to the guild, the better their chance of getting sponsorships.

Oddly, for a movie about competitive fighting games, we never see Justin play much Street Fighter.  Most of the fighting footage consists of quick montages  versus an opponent at an event. There's never a point where the filmmakers sit down and interview Justin on why he likes the Street Fighter franchise specifically, or what technically makes Street Fighter IV a more interesting or better game than other competitive fighters. There are no tips from him on how to play a specific character, or how to pull off special moves. The film doesn't ask why he plays games, how he feels about Capcom and other fighting games, or even why he competes. Who are his influences? How did he get into video games in the first place? Who or what motivates him?

These are all questions I had about Justin, but the film never answered them.

Triforce Johnson is a far more interesting character. He's a middle aged, divorced man who wears a Nintendo Powerglove to events and constantly promotes Empire Arcadia. He's set his apartment up as the empire's headquarters and lives there with the team members in Brooklyn, New York. It's both a home and workplace for those involved. 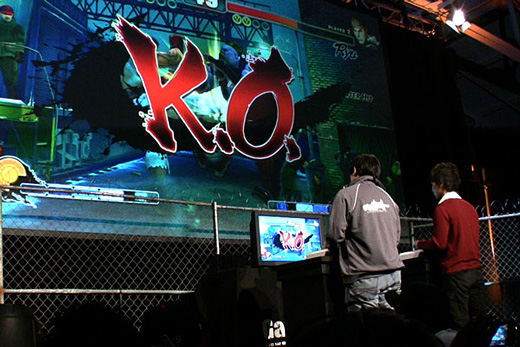 If this sounds strange, that's because it is: it's basically a fighting game commune in Brooklyn.

The organization, as Triforce calls it, is still not profitable yet. Much like its founder, it can't seem to get ahead. There's a brief moment in the film where Triforce recounts his failed marriage, lamenting the fact that it failed, and that his passion for competitive video games got in the way. It's the most sympathetic that the film allows us to be towards him, since he later comments that in America, only a sucker does a 9-to-5 job.

Along the way Triforce and Justin often run into Daigo, a rival who's beat Justin in the past. Daigo is a Japanese native who speaks only through a translator. Aside from the fact that he's previously bested the star of the film, there's no real reason why he's Justin's "rival." He doesn't come across as someone incredibly arrogant. We never hear or see him do much outside of playing Street Fighter. He's mostly just there as someone that Justin has to beat. If anything, seeing other people put Daigo down made me feel sympathetic for the foreign competitor, as he was often out of his element while competing at American events.

There are a few extra features on the DVD such as a slightly different ending, a handful of deleted scenes, and some behind-the-scenes moments. None of these add much to the film. None of it sheds any light onto why the film was made or what made the filmmakers so interested in telling this story to begin with, and the deleted scenes are largely forgettable. The exception is a short scene in which Justin mentions how he doesn't tell his family about his Street Fighter winnings, because he expects they would want him to get a real job.

King of Chinatown is a movie that I really wanted to like, but after a couple viewings I found myself scratching my head and wondering why it even exists. It comes in at just over an hour, but I felt like it needed at least another thirty minutes of content to flesh it out into a full movie. While I like some of its ideas, the final product was ultimately disappointing.

(Deaf and Hard-of-Hearing viewers, please note that there are no subtitles or captions of any kind on the DVD.)