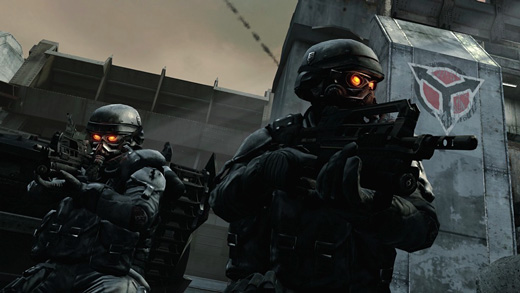 Killzone 2 was one of the most hyped games to be released on the PlayStation 3. It first debuted at E3 2005 when Sony (along with Killzone's developer Guerrilla Games) showed a brief trailer showcasing superb visuals unmatched by anything seen in video games. Since then more and more footage of the game was released and the hype built up to a point where one could not mention the name PlayStation anywhere near a gaming community without the name Killzone 2 being mentioned. The game finally released in February 2009 and was revealed to be (in my personal opinion) a big disappointment.

This statement may come as a surprise to anyone on my PlayStation Network (PSN) friends list, as Killzone 2 has undoubtedly appeared next to my name more so than any other game since its release. This fact I can't deny for I have become quite addicted to the online multiplayer. While the game modes themselves are nothing special, five team-based modes that are found in most shooters: Deathmatch, Capture and Hold, Assassination, Search and Destroy, Search and Retrieve, and a mode called Warzone that strings the five together into one match, the game's use of the badge and ribbon perk system provides an almost role-playing game (RPG) like experience. While most of the mainstream shooters today offer some kind of perk system for their multiplayer, I find this one to be the most intriguing since its perk system has its own perk system.

The system is simple: complete mission objectives to earn experience to level up and a new badge is unlocked with each level bringing special abilities with it. Unlike the perks from other games I've played where the abilities are mostly increases in accuracy or speed of movement, the abilities presented here can be game changing (such as the abilities to disguise oneself as the enemy, summon flying sentry bots, or even turn invisible while sitting perfectly still.) The system starts getting interesting when the concept of ribbons are introduced (the perks within the perks). When a player performs a certain action a certain number of times a ribbon is rewarded. When a certain number of the same ribbon is collected, a new badge and/or ability is unlocked further intensifying the RPG-like feel. A good example of this is how a player unlocks the magnum side arm. When a player gets a certain number of kills using a side arm, they receive a ribbon. When ten of those ribbons are collected the magnum is unlocked.

While the online aspect of the game is in fact a match made in heaven for someone who is a big fan of both shooters and RPGs as I am, the problem I have with Killzone 2 is not with the multiplayer, but with the game itself. It's not that Guerrilla didn't deliver on its promises; Killzone 2 does in fact contain visuals very close to matching the E3 trailer, and even sets a new standard for enemy AI to boot. No, my disappointment lies in the fact that Killzone 2 suffers from an identity crisis. Instead of developing a clever story line or inventing a new and exciting gameplay mechanic that sets itself apart from its competitors, Killzone 2 does nothing more than tell the player to go to this spot and blow this up while killing the same enemies over and over. There is a little variation sprinkled here and there where the player will have to man a turret or drive a tank, but these moments are so pointless and out of place that they seem to be nothing more than a petty attempt to match competing games from the genre.

The sad part is that the story surrounding the Killzone series is good enough that it could easily set itself apart from the rest of the pack. It's just too bad that the game doesn't want to tell it. Sure, Killzone 2 starts off promising enough with an opening cinematic featuring a motivating speech from the enemy's leader before letting the player know that he is part of a squad that is being sent to capture said leader. The game even goes so far to show that there is a bond between the squad mates, but then seems to lose its train of thought as soon as the first mission begins. What little bit of story presented afterwards is barely enough to string the missions together, let alone keep the player interested. There are a few cinematics in the later half of the game that I'm sure would have had a big emotional impact if only the game would have properly developed the characters or plot. Because of the lack of story telling chops, these cut-scenes only offer a two to three minute break from the tedious gameplay and nothing more.

The lack of story telling combined with worn-out and tedious gameplay left me with the impression that Killzone 2 tries to assume the identity of its competitors but fails to come anywhere close. Every moment I spent in the campaign was met with nothing but boredom and frustration, but at least it has a superb multiplayer. Rating: 7.0 out of 10.

Disclosures: This game was obtained via retail store and reviewed on the PS3. Approximately 12 hours of play was devoted to single-player modes (completed 1 time) and over 100 hours of play to multiplayer modes.

Parents: According to the ESRB, this game contains blood and gore, intense violence, and strong language. The blood and violence is nothing more than your average shooter, but really strong language is used. Not for young children.

Deaf and Hard of Hearing: The game has subtitles for all dialogue. With the exception of a few profanities from the enemy, nothing will be missed.

[quote=Anonymous]That’s not a compliment, it has a godawful single-player with a a shitty storyline and a decent multiplayer that is unbalanced so it’s streamlined for the casual mainstream audience.

I’ll give it props for not being a bad as Halo though.

I agree with you about Half-life, but I would put Call of Duty in the same boat as the rest of them.

Thanks Hayley. I didn’t won’t the section about the multiplayer to drag on to long and overpower the rest of the review.

That’s not a compliment, it has a godawful single-player with a a shitty storyline and a decent multiplayer that is unbalanced so it’s streamlined for the casual mainstream audience.

I’ll give it props for not being a bad as Halo though.

Good review and I agree with you completely on the same old, story-less, brain-less single player that seems to be a dime a dozen in FPS’s these days. One thing I would have mentioned about the multiplayer, though, is the ability to mix and match a primary ability of one class with a secondary ability of another class (once you’ve unlocked them, of course). Just since you were already talking about how the perk system of Killzone 2 is more complex than a lot of other FPS perk systems.