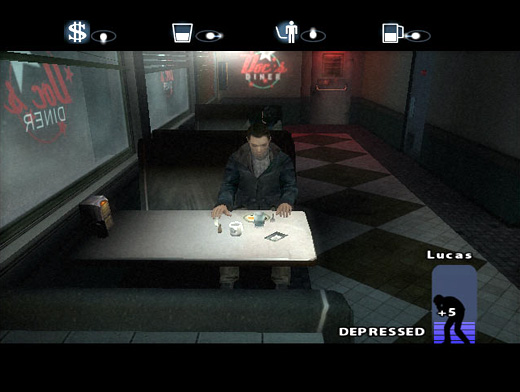 Brad said that while playing Indigo Prophecy, he felt he was seeing a new genre being born, and I couldn't agree more. This game is the opening salvo of the "suspense" genre, making it all the more surprising that, for the most part, its aim is true.

Primarily, the suspense is created by a tight script by creator David Cage that's also convincingly brought to life by some talented voice actors. Make no mistake, this is a story-driven game, and, almost without exception, the title's gameplay innovations are in service to the plot.

The most effective of those innovations for me was, to crib a phrase from Brad, the "splitscenes." When the screen splits and a long fuse appears, burning away the seconds until your death (or arrest), it's impossible not to be immersed. It's the most effective tool the developers have to send the pulse skyrocketing and is perhaps the loudest announcement that this is indeed a new genre.

Cage and team have also included some minigames of a sort that require quick reflexes. Twitch gameplay is not what gamers are used to seeing in this type of adventure game, but it's surprisingly effective.

One of the few topics on which I do take issue with Brad's review is his complaint of fatigue after hammering on the shoulder buttons. This mechanic is almost exclusively used when the lead character is doing something tiring, and I felt my exhaustion was just another level of immersion.

I do share Brad's frustration with the "quick time events" that require timed controller responses during action sequences. It's simply too difficult to watch the (extremely well done) action sequences and not get distracted from stick-flipping duties. The events do increase the tension though, so I suppose they serve their purpose.

My one major complaint stems from the last two hours or so of the game. The pace, as Brad said, gets out of hand in the game's final act. It is the equivalent of spending ten hours untangling a tightly-woven knot only to get frustrated and take a match to it. It's no more outlandish than the typical threadbare plotlines that plague so many titles, but after such a strong beginning narrative, the devolution from an intense, personal story to a generic "save the world" finish seems downright jarring.

In the end, my quibbles don't really matter that much. Most reviewers, myself included, will almost certainly not rate Indigo Prophecy by its quality. This game has the potential to breathe life into the flagging category of story-driven games, and there is a temptation to give it the benefit of the doubt. As a gamer, I found myself so compelled by the freshness that the game's creators were bringing to the to the table that I was willing to accept the handful of problems, and I'm willing to bet that players who pine for the glory days of adventure games will do the same.

What Cage and team seem to be doing is throwing some really solid gameplay ideas at a wall and seeing what sticks. Make no mistake, what gamers buy when they pick up Indigo Prophecy isn't a game, it's a manifesto, a shakeup of tired conventions. What matters most in the way this title is judged is the seeds that it sows in the game design community.

We will truly be able to rate this game in five years, when we see how many games have taken their place in the suspense genre, and how many of Indigo Prophecy's unique gameplay ideas have truly found their footing. Rating: 8.0 out of 10.