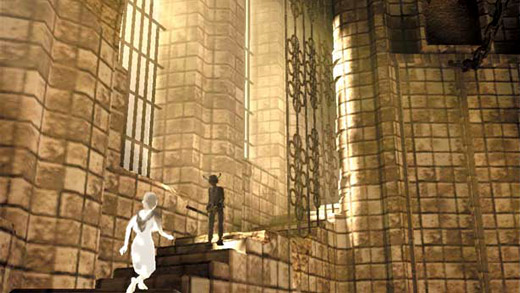 I completely agree with Brad's assessment of ICO as art—the game really is that beautiful. You'll have countless moments where you just have to stop and soak all of the scenery in. This sleeper hit of the year is simply too good to be missed.

As Brad pointed out, empathy for your protagonists is the heart of ICO. You'll have no choice but to identify with the characters, feel their pain, and experience their solitude. There will be times when it feels like you are standing right over two living, breathing beings, guiding them to the next exit in the hopes of actual escape. What makes this all the more impressive is the overall lack of heavy dialogue and lengthy cut-scenes. The connection between gamer and game in ICO is mainly accomplished through the masterful character animation and the engrossing setting. Yorda and Ico's body language speaks a thousand words, while the castle casts a feeling of desperation and urgency. ICO is definitely more than a mere game, it is an experience.

Those who have played any third-person-action/adventure-platformer game will definitely feel comfortable with ICO. The easy controls coupled with the non-existence of inventory and the lack of a cluttered interface will make it easy to play for those who aren't familiar with its style. ICO is approachable, which makes it ultimately fun to play and easy to get swept up in.

The only thing I can disagree with Brad about is the length of ICO. My first play through took about 5½ hours. Not too bad, but not too great. I just had to play the game again, so I tried to see how long it would take with the knowledge of the game's puzzles still fresh in my mind. It took me 2½ hours. This turns ICO from a must-have title to a great rental. Although I do agree that 'trimming the fat' is definitely a good thing (my current game—Metal Gear Solid 2: Sons Of Liberty—could definitely take notes), ICO starts to trim the meat, and is eventually not enough to quell your gaming hunger. But, this could also be construed as a testament to how good a game ICO really is. I just couldn't get enough!

My only major gripe with ICO is the usual complaint about 99.99% of 3-D games: The camera. It seems the developers wanted to use the camera as more of a cinematic tool than a useful gameplay element. Since the controls are relative to the camera position, there were countless times that I lined up for a big jump only to have the camera shift at the last minute, causing me to miss the jump. It took some getting used to, and had me pretty frustrated at some points. Had you been able to lock the camera in position, this would not have been a problem.

Yes, ICO is art done in moving pixels. And for that, it is worthy of every gamer's time. But even though I view ICO like I would fine art, I see it more like a Mona Lisa with the head missing, or David without any arms or legs. It's great to look at, but you can't help but think, "shouldn't there be more?" Rating: 8 out of 10.