If Agent 47 and Sam Fisher had a Lovechild, Absolution Would be its Name 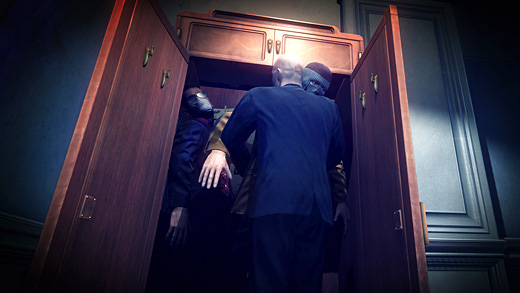 HIGH Absolution has the most realistic living world I've experienced in a game.

WTF Who casts badass Vivica A. Fox just to give her a tiny bit of dialogue?

In Brad's review and Mike's second opinion, they offered up thoughts on the recent Hitman sequel, Hitman: Absolution

. Even though I can confidently say that I liked it more than both of those gentlemen, I couldn't help but agree with some of their criticisms.

It's true, the revamped disguise system is often more of a burden than a boon to the player, the tight focus on storytelling is lost due to the story being pretty stupid, there are too many levels that funnel players through linear areas, and the enemy AI is occasionally all over the place. Despite all that, I'm here to speak out in favor of Hitman: Absolution because I enjoyed it, even if I do have problems with it.

For me, Hitman: Absolution is the kind of game the player has to figure out. When I first finished the campaign, I thought to myself, "That wasn't very good," but I still wasn't ready to put it down because each level has a list of optional challenges I wanted to test out. Most of them involve multiple ways to assassinate targets or the usual get-through-each-area-unseen objectives. It was when I started replaying to earn the challenges that Hitman: Absolution started growing on me.

By analyzing and figuring out each level, Absolution opens up and the player can really suss out how it works. Yes, it involves trial and error, (what stealth game doesn't?) but that's not unlike the previous Hitman titles.

When I initially played through, I didn't do anything too risky, and I often attempted the path of least resistance. Instead of rigging up elaborate traps and luring a target in, I usually just went for a straightforward bullet to the brain or a wire around the neck. I wanted to be positive I'd get a safe, clean kill and not end up blowing up half a city block with mistimed explosives.

When I was in challenge mode, I found that completing them often required me to use the less-obvious kill methods IO placed in the game. For example, in one mission where I originally shot a guy with a silenced pistol, the second time I turned a gas stove on, waited for him to walk in the room and shot the stove. The target was barbecued, and it looked like an accident.

In another mission, I dressed up as a target's drug dealer, poisoned some cocaine ahead of time, and then led the target into the dealer's den to test the drugs. It wasn't long before he was sprawled out on the floor without a bullet wasted. It was much more dramatic and elaborate than, say, sniping the target from a window. 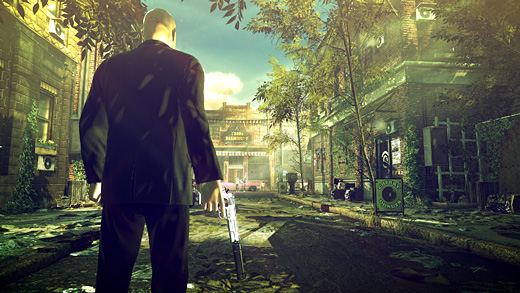 Playing Absolution is a labor of love. The player has to take the time to truly understand its ins and outs to appreciate it, and it's not something to rush through. I can totally understand why people are turned off by Absolution; it's not for everyone. It, along with the previous Hitman titles, are puzzle games at heart, and they require some tinkering to solve. Not every player has the patience for it.

Now with all that said and my seal of approval given, I do still have complaints to lodge.

My biggest, and one which Brad lightly touched on, is the checkpoint system. In previous Hitman games the player could save anywhere, anytime and load up the save if something ruinous happened. In Absolution, there are checkpoints in specific places chosen by the developers. When 47 stumbles across one, the player can either activate it for future reloading or ignore it and move on. The checkpoints would be a plausible replacement for the save-anywhere function if they actually saved everything… But they don't.

In one mission, I meticulously killed a target, then did the logical thing and activated the checkpoint after the kill so I wouldn't have to do it again. Things got hairy (I was going for a no-detection run) so I reloaded only to be surprised when I discovered that the target was alive and kicking again. After I got over the shock, it was revealed that the checkpoints only save 47's physical location in the stage and not all the progress up to that point. In my view, this makes them nearly worthless.

The other problem I have with Absolution is the inability to choose gear before replaying stages. In previous Hitman titles, players had the option of selecting which weapons they wanted to take into levels. For instance, I can't count the number of times I took a shotgun into Blood Money's levels just to wreak havoc. That same freedom to create my own entertainment just isn't here. In Absolution, players can only outfit in Contracts mode, a mode that allows players to create custom missions. Considering there are multiple downloadable outfits and weapons available, it's surprising that they're not able to be used in the story mode.

What really rubs me the wrong way about both of my complaints is that (A) they could both be fixed with a patch and (B) they attempt to "fix" things about previous Hitman games that weren't even close to being broken in the first place. IO has tinkered with a great formula and made it worse for no logical reason.

For what it is, I think Absolution is a very good game. It's not groundbreaking or amazing, but it's got a slightly different focus than expected. Where previous Hitman titles were at their best when 47 could get in and out without anyone noticing, I think Hitman: Absolution

is at its best when things fly off the rails just enough to keep it interesting, but not enough to turn every level into a straight shootout. With Square Enix's plan to have a newly-formed internal studio develop the next Hitman instead of IO Interactive, I'm curious to see whether the next installment will keep following this new evolutionary arc, or if it will return to its roots. Either way, it had better not be another six years before we find out. Rating: 7.0 out of 10.

Great review — glad that someone out there found something positive in the experience, and that we have a counterpoint to me and Brad’s take.

Nobody seems to mention the fact that 47 can now stuff enormous rifles into his jacket. The older games made the player smuggle wepaons past guards, (or even just throw tem over the wall in Blood Money), or leave them somewhere for pickup later on – Absolution no longer allows you to drop weapons or items. These things in the old Hitman games offered extra challenge and realism, without feeling like a chore.